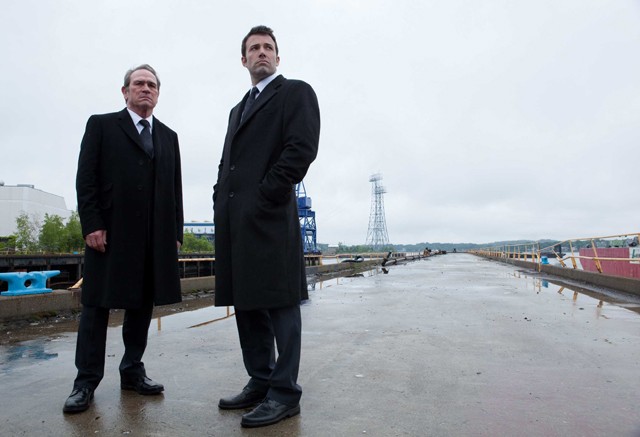 Hear that sound? It's the world's smallest violin. And it's being played by Emmy-laden TV producer John Wells (ER, The West Wing, Southland). See, the first-time filmmaker has composed a cinematic ballad for our nation's financial woes because, well, rich white corporate execs are suffering too. Yes, he's asking all of us to weep for the wealthy. See, they have to give up their high-priced golf club memberships and (gasp!) suffer the indignity of selling their new model Porsches. No shit. Those are actually plot points in The Company Men, a film that has deep wells of sympathy for the financial hardships that currently face America's country club set.

My God, if there's one movie you could say is tone-deaf to the grim realities most Americans are facing in this era of unbridled corporate economic violence, it is undoubtedly this well-acted yet condescending turd. I don't care how soulfully craggy Tommy Lee Jones' face is or how polished Wells' ham-fisted talking-point dialogue seems, this Up in the Air bookend is a slick, smugly self-content tale of entitled, rich white dudes suffering through problems they created for themselves.

Exhibit A: Ben Affleck's petulantly egotistical Bobby. Overextended and dismissive of others, he's a young exec who's unexpectedly laid off when his company decides to cut costs to become more attractive for acquisition. His wife (the lovely Rosemarie DeWitt) is patient and practical — due to her blue-collar origins, no doubt — and his kid sells off his Xbox while Bobby turns down job offers that don't hit his $100,000-a-year minimum. He even scoffs when his brother-in-law (Kevin Costner) offers him a construction job. Foreclosure and loss of social status are bad enough, but accept icky blue-collar manual labor? Please.

Watching Affleck's character evolve into something human might have made for a decent movie if The Company Men didn't empathize so deeply with choices. Yes, Costner's salt-of-the earth Jack, a contractor who's wise, generous and just a little abrasive, is a workingman hero that muddles through by keeping his chin up and putting in few extra hours. But intentional or not, Wells uses him to reinforce the message that we shouldn't worry about the small people, they'll take care of themselves. It's the travails of the upper crust that deserves our attention and empathy.

Exhibit B: Bobby's storyline is the underwritten centerpiece in a downsized triptych that also includes aging senior executive Phil (Chris Cooper) and the company's No. 2 guy, Gene (Jones). Both are pushed out, and both have shrewish, materialistic wives who spend, spend, spend. Phil is too old and far too overleveraged to retire, with only his stock options and a yearlong severance package to cushion his fall. He's a wounded lion who falls into despair and sees only one way out of his dire situation. Gene, on the other hand, is the top dog with a conscience, the guy who argues with the company's callous CEO and former best buddy (cunningly cast right-wing apologist Craig T. Nelson) against massive job cuts. He's sent packing by his sexy blond mistress (Maria Bello), the firm's hard-as-nails hatchet woman. Financially he's fine, but, oh, the blow to his integrity.

Yes, Wells deserves a few points for effort. His movie is obviously intended as a condemnation of corporate greed and his excellent cast works hard to make something meaningful out of it. But there's no getting around its pedagogical leanings, a TV-style lecture from a rich white guy who knows absolutely nothing about poverty or true economic hardship. The film's commitment to on-the-nose overexplanation is only overshadowed by the brevity of its main character's suffering. See, for all his woes, Bobby's horrifying journey into unemployment was a character-enriching pit stop, lasting less than six months. The movie ends (spoiler alert) with him accepting a humble $80,000-a-year position at Gene's upstart firm. See, rich white folks, you may have to downgrade your Beamer to an Accord, but Wells is convinced you'll still land on your feet.

If you're looking for a film that puts faces to some of the least sympathetic victims of the financial crisis The Company Men is worth your $10. For the rest of us, there's always whatever's on cable. That is, if it hasn't been disconnected.