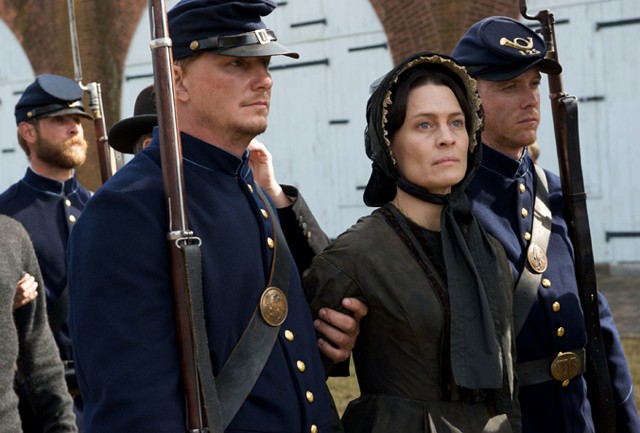 You may be surprised to know that Robert Redford has only directed eight features over the last three decades; though that shock becomes milder when you consider what colossal, thudding bores almost all of those pictures are. In retrospect, it's easier to admire a film like say, The Milagro Beanfield War, than it is to actually sit down and watch it. This is also the case of with The Conspirator, Redford's latest dependably pedantic daytrip through a dusty corner of history. Redford has never let a good story get in the way of a moral, and this handsomely made, stoutly acted and dramatically inert film is both fascinating and achingly dull.

The film recounts the underreported story of the chaos that immediately followed Abraham Lincoln's assassination, of the

complex conspiracy to bring down the Union government, and the woman who got swallowed up in the gears of justice. In those frenzied days after the tragedy, the North won the war yet almost lost the nation. Actor John Wilkes Booth pulled the trigger on April 12, 1865, but he was just one of a group of disgruntled Southerners who hatched a plan to kill not just the president, but vice president Andrew Johnson and Secretary of State William Seward. Many of the planning meetings of this cabal were held at the Washington boarding house of Mary Surrat (Robin Wright Penn), and when her son John fled to the countryside, Mary was charged as a co-conspirator in the plot.

In the film, she is to be tried by a military court, and sensing that a Yankee lawyer has the best shot at defending her, Sen. Reverdy Johnson (Tom Wilkinson) assigns young decorated war hero Frederick Aiken (James McAvoy) to the thankless task. The consternation this causes his friends, comrades and fiance (Alexis Bledel), is merely window dressing to the courtroom action, which Redford relishes. Any inference to current events, of secretive tribunals, rushes to judgment, terrorism, extraditions and enemy combatants, is strictly intentional, as the director hangs contemporary political points atop historical record.

He may be dead-on in his argument — this case set some legal precedents we're still dealing with, and the outcome of the remains controversial — but in presentation Redford is stiff as a starched collar. This is isn't the actors' fault; the cast is loaded top to bottom with reliable (though sometimes hammy) players, including Kevin Kline, Evan Rachel Wood, Danny Huston and Colm Meany. The one sour note comes from Justin Long, who, in his Union dress blues and thick fake mustache, resembles a fugitive from a Carol Burnett sketch.

The look of the film has been color-corrected to a faint sepia hue, which lends an otherworldly air, but also keeps the events at distance better examined in a classroom than a multiplex.