The coronavirus has disrupted Detroit arts and culture — and yes, Metro Times, too 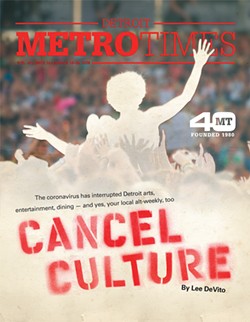 The spread of COVID-19 — the potentially deadly coronavirus that originated in Wuhan, China, has infected more than 175,049 people worldwide, and killed more than 6,706 in what the World Health Organization has declared to be a pandemic — has drastically disrupted daily life around the world. Officials are urging people to practice “social distancing,” a strategy that slows down the spread of the virus by limiting contact between people. Many governments, including Michigan’s, have officially banned gatherings of 250 people or more, and people are being encouraged to avoid unnecessary travel. On Sunday, the Centers for Disease Control and Prevention called for people to avoid groups of 50 or more.

School is canceled for now, as are concerts, professional sports, and political rallies (and during an election year, to boot). The Saint Patrick’s Day Parade, the Marche du Nain Rouge, and the Hash Bash have also been canceled. Restaurants, cafes, coffeehouses, bars, clubs, movie theaters, performance venues, gyms, recreation centers, indoor sports facilities, spas, and casinos are all closed. Giant corporations like the Big Three and Quicken Loans have told their employees to work from home if possible, while other companies have been forced to lay workers off. The impact of the virus could have an effect on the global economy at a level not seen since the 2008 Great Recession.

This means Detroit’s arts, culture, entertainment, and dining scenes are in trouble — but there are things you can do to help. For example, you can buy gift cards from your favorite restaurants so you can patronize them when it’s safe to be in large groups again. Many restaurants, like the recently reopened Kuzzo’s Chicken and Waffles on the Avenue of Fashion, are offering carry-out options where they’ll walk the food out to your car so you can avoid the crowd. If you do go out, be sure to tip extra to compensate for the loss of revenue.

Unfortunately, gift cards don’t necessarily help servers or bartenders, who depend on tips. If you know servers who work at spots you frequent, consider asking them for their Venmo or PayPal to send them some cash.

If there are musicians or artists you support, consider buying merch, like records or T-shirts. We’re told some local promoters are planning fundraiser concerts that will be livestreamed online, and we expect other artists to figure out other ways to get creative.

As you can imagine, for a scrappy alt-weekly whose revenue comes primarily from ads from events, bars, and restaurants, and whose content is primarily geared toward things to do in and around Detroit each week, this is massively disruptive for us here at Metro Times, too. If you’re reading this in our print edition, you might notice this issue is far lighter than usual, as pages for ads for events were pulled and stories tied to events that have since been canceled were scrapped.

In Seattle, where the first U.S. cases of coronavirus were detected, The Stranger temporarily laid off 18 employees and suspended its print issues. It’s the first time the alt-weekly hasn’t been printed in nearly 30 years.

Suffice it to say, we don’t know what’s going to happen here in Detroit. We’re hoping for the best, but preparing for the worst. To be honest, we’re not even sure if there will be an issue next week.

If you’re a business that’s still open, we hope you consider buying an ad in Metro Times. Your ad will go a long way in helping us weather this pandemic, so we can continue to keep metro Detroit informed during this difficult and confusing time. You can also make a donation.

One thing we do know from covering Detroit’s arts and culture scene is that Detroiters are resilient and resourceful. We’re used to getting by with what we have, and helping others in the community when they need it.

Somehow, we’re all going to get through this.