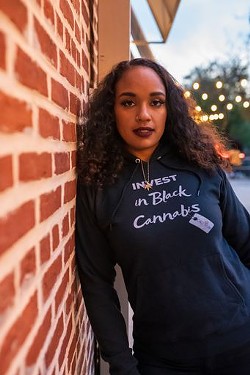 Rebecca Colett has been a part of Michigan's formal cannabis industry for about as long as it has existed. Starting off as a caregiver for medical marijuana patients in 2009, a decade later she expanded with commercial cultivation and processing facilities on Detroit's west side. She co-founded the Detroit-based cannabis brand Calyxeum, named after the the first part of the cannabis flower that develops.

"It's the female part of the plant that produces all the medicine," she explains, "and we're female-owned and operated."

As a Black woman and native Detroiter, Colett noticed a troubling trend as the cannabis industry bloomed in Michigan and across the country. Nationwide, only 2% of cannabis licenses are owned by women, and only 4% are owned by African-Americans. Meanwhile, 85% of cannabis convictions are people of color.

"I noticed it by going to conferences and [Marijuana Regulatory Agency] meetings and all kinds of stuff and noticing like, 'Hey, I'm the only one here,'" she says. While many governments have enacted social equity programs to help give groups that have been harmed the most by the war on drugs a leg up in the industry, Colett says she feels they often don't go far enough.

"They have some initiatives, but you can't expect the government to really be that involved," she says. "It's really going to take the community, the cannabis community ourself, promoting diversity and inclusion."

That's why Colett founded the Detroit Cannabis Project. As the City of Detroit expands its marijuana licensing program from medical only to include adult-use, it has set forth a social equity program to give "legacy Detroiters," or long-term residents, help in the form of prioritization and reduced fees. As a certified "legacy" applicant who helped the city draft the ordinance, Colett says she founded the Detroit Cannabis Project as a business incubator in part to help others apply for it as well.

"I lobbied really hard to get this ordinance approved because I'm very passionate about equity inclusion in cannabis, especially in my home," she says.

Still, she found the end result a bit lacking. "It's not enough to offer 25% off on a license or application fee," she says. "It's just not enough. The industry is sort of so far gone with the diversity issue that we really need to put some programs in place that give applicants real technical assistance, not just some basic one-on-one." The industry that has so many quirks to it, especially since cannabis remains illegal under federal law — a "you could get your account shut down tomorrow kind of thing" if you're not careful, she says.

"I kind of just said, 'You know what, I'm going to do this on my own,'" she says. "I have enough experience, one, as an operator, and two, I know so many amazing cannabis operators and entrepreneurs around the country that have different skillsets that would be very beneficial to a social equity applicants."

Colettt started the program with the help of Lantern, a cannabis delivery company that operates out of multiple states. The program launched last week with a virtual general information session that Colett says drew about 200 interested applicants. The deadline to apply to the free program ended Friday, and will now commence with about a month's worth of twice-a-week virtual meetings on topics ranging from best practices on branding, banking, and more, with different experts in the field leading the sessions.

The program is geared toward "legacy" Detroiters, social equity applicants in other cities, and anyone else who is a minority in the cannabis industry. After the program, Colett says the applicants will have access to a private Facebook group that will help connect them to resources including mentors, attorneys, architects, contractors, and more.

"I'm just so blown away by the talent in Michigan," Colett says. "A lot of people always look to Cali and Colorado as like the kings of the cannabis industry, when really Michigan, we've been doing this for so long, and since Michigan has had a medical market for so long, there's a lot of unused cannabis talent in our state. There's a lot of great talent. They just need a little guidance."

Colett says that while the program was timed to help people apply for Detroit's social equity program, she plans on accepting applicants for more cohorts later this year.

"We personally, as brands, want to see more inclusion in the industry," she says. "We want the industry to look like the world does."