The end of Roe 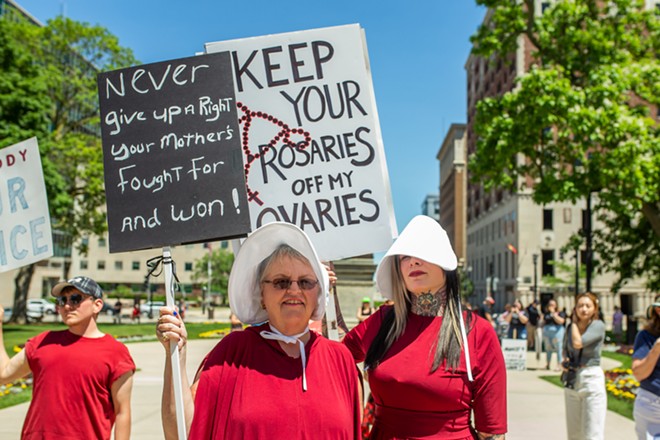 From the second news of Ruth Bader Ginsburg’s death broke, this was the play.

This was the reason Republicans muscled through Brett Kavanaugh despite the sexual-misconduct allegations against him. It was why Mitch McConnell invented a rule to block Merrick Garland in 2016, abolished the judicial filibuster to install Neil Gorsuch, then ignored his own make-believe rule to install Amy Coney Barrett a week before the election.

Not only did they have a conservative Supreme Court; they had a court packed with zealots, people for whom precedent and civil liberties were but bumps in the roads. John Roberts, the quintessential institutionalist who had twice saved the Affordable Care Act, would no longer be the fifth vote for a right-of-center court that cared about its reputation. The reactionary majority — the last three appointed by a president and confirmed by a Senate that never won the support of a majority of the population — doesn’t need him to impose its will and has little regard for the views of posterity.

It seems likely that, a year from now, the Supreme Court will hand down a 5–4 ruling that obliterates Roe v. Wade and Planned Parenthood v. Casey, the two cases undergirding abortion rights. The case, Dobbs v. Jackson Women’s Health Organization, focuses on a Mississippi law that bans abortion at 15 weeks of pregnancy.

There’s no impetus for the court to take up Dobbs.

It plainly violates both Roe and Casey. As the latter says, “Before viability, the State's interests are not strong enough to support a prohibition of abortion or the imposition of a substantial obstacle to the woman's effective right to elect the procedure.” Twenty-four weeks is considered viable. At 23 weeks, there’s a less than 50% chance of survival outside the womb; before then, about 95% of fetuses die, and those who survive are almost certain to have significant complications or long-term disabilities.

Advancements in prenatal care have improved outcomes for very early preemies in recent decades, but a fetus that has gestated for 15 weeks is in no way, shape, or form viable. Because the case is so obvious, there’s no disagreement among lower courts; both the district and appellate courts have ruled against Mississippi.

The only reason, then, that the court agreed to hear arguments in Dobbs is that at least four justices are considering discarding Roe and Casey.

Of course, Mississippi’s law won’t be enough. Two days after the court took up Dobbs, Texas Gov. Greg Abbott signed a law that bans abortions after six weeks of pregnancy — before many women know they’re pregnant — and, absurdly, gives any random citizen the right to sue physicians or clinic workers who facilitate abortions.

“This bill ensures the life of every unborn child with a heartbeat will be saved from the ravages of abortion,” Abbott tweeted along with a video of him signing the bill while surrounded by the pastiest crowd you’ve ever seen. Abbott might want to consult an obstetrician. Six-week-old embryos don’t have hearts, so they can’t have heartbeats. Doctors can detect rhythmic electrical activity from what will eventually become cardiac cells communicating with each other, but that’s it.

Abbott’s the same guy who just declared local government and public school mask mandates illegal because — and I quote — “Texans, not gov’t, should decide their best health practices.” Exceptions apply, I guess.

Once the Supreme Court gives “heartbeat bills” its blessing, you’ll see stories of working-class women, often Black or Hispanic, bleeding out while terminating their own pregnancies. The Republican Party will shrug and say they brought it on themselves. Others who carry the fetus to term will spend the next 18 years struggling through a shredded welfare state with male politicians telling them they should have kept their legs shut.

For those who can afford it, however, a flight to New Mexico or California is cheaper than a baby. There’s a subset of the “pro-life” crowd for whom such an outcome is perfectly acceptable: When their teenage daughter gets knocked up, that’s different. She’s got her future to look out for. Besides, what would the youth group think?

But for the true believers, the ones who watch The Handmaid’s Tale for inspiration, not even Texas’s law will suffice. They want the court to not just reverse Roe, but to impose a reverse-Roe: a court-ordered nationwide abortion ban. The thin-reed legal framework is that, just like Black people, nonviable clumps of cells are persons protected by the 14th Amendment; ergo, abortion is murder. (A woman who doesn’t know she’s pregnant, gets drunk, and miscarries would presumably be guilty of negligent homicide.)

It doesn’t have to be a good argument. They have five zealots on the Supreme Court — a once-in-a-lifetime opportunity made more urgent by the speed with which religion is losing its grip on America. The only question is how far Brett Kavanaugh is willing to go in dictating what women can do with their bodies — and his commitment to female autonomy is debatable, to put it mildly.

Actually, there’s another question, though we already know the answer. Senate Democrats could add two or four more justices to the Supreme Court, counteracting McConnell’s dirty pool. Congress could also pass a federal law safeguarding abortion rights — an uneasy constitutional prospect with an unfriendly Supreme Court, but there are workarounds. But both options require a commitment to women’s health, democracy, and eliminating the filibuster that Democrats don’t currently possess.

So women might soon find themselves at the mercy of men like Abbott and Kavanaugh. That will be Mitch McConnell’s legacy.