The etiquette of the mosh pit, explained 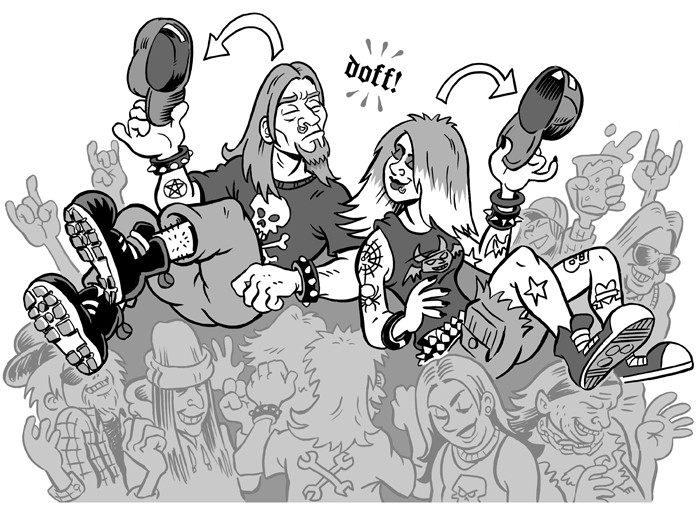 Pit etiquette: To the untrained eye, a mosh pit looks like a bunch of morons running into and fighting one another. Its purpose, however, is not to injure, but rather to release frustrations and celebrate music.

Every pit is different. These differences depend on the type of music played at the show, as well as the particular people in that particular pit. At heavy-metal shows, a circle forms around the pit, and participants usually take part in slam-dancing (the precursor to the modern pit, in which participants run into and merely shove one another), headbanging and pogo-ing (jumping up and down in place). Punk-rock pits often exhibit “ninja moshing,” a type of moshing in which fists and feet are used, as well as the dangerous and incredibly stupid wall-of-death — look it up — in addition to slam-dancing and headbanging.

The intensity and danger levels differ for every pit, but the guidelines governing pit douchebaggery remain the same, at least at heavy-metal shows.

The first thing you need to know about pit etiquette is that it applies to everyone at the show. Not everybody wants to be in the pit. There are people out there who think that moshing is just the dumbest thing — and you have obligations to those people, as well as to those in the pit with you.

If someone is standing on the sidelines, there’s a good chance he’s there for a reason. Pushing someone who’s just trying to listen to the music into the pit is a huge asshole move. There are those who want to mosh and those who don’t. Respect their choice not to, because they might not be so respectful of your face if they end up out there.

Also, if someone you don’t know is closer to the stage than you are, don’t use him as a launch pad. Grabbing his shoulders and launching yourself up will only propel him down, and he could end up on the floor, on the stage barrier, or underneath you. If that happens, you deserve everything you get when they throw you to the floor.

If you should enter the pit, you need to know what you’re getting into. The pit can turn real intense, real fast, and you need to be prepared.

Always be ready to help people off the ground. Just because you see someone on the ground doesn’t mean everyone else does. It’s everyone’s responsibility to stop trampling in the pit. There’s usually a gargantuan brick wall (that may or may not be wearing a kilt) of a person in there, and at some point you’re gonna go head-to-head with him. Also, be on the lookout for chains and spikes. Most people take this stuff off before they enter the fray, but not everybody does.

You should also keep an eye out for the guy who thinks he’s Bruce Lee. This guy stands in the middle of the pit and roundhouse-kicks everyone and everything. Don’t be Bruce Lee. Set a better example by using your body’s flat surfaces to make contact — not your feet, fists, or elbows. Shoulders, open hands, and the complete front of your body work best. Avoid the head and the throat. And remember: Kicking and choking aren’t moshing.

Be prepared to get dirty. There’s always one drunk guy who refuses to put down his drink and sloshes it all over the place. He ‘ll leave for a moment, only to reappear with another beer. He’ll hold that beer over his head and proceed to mosh as if he’s empty-handed. There’s nothing you can do to avoid this.

Also, few things are worse than getting in the pit and getting a hand in the pants. For all you perverts out there: There are going to be girls in the pit; it’s imperative you respect them. There’s a big difference between running into them and unhooking their bra. Groping in the pit is rare, but it does happen and it’s a good way to get your shit fucked up — if not by the girl, then by one of the guys who sees it.

If you’re not quite ready for the pit, no worries. It’s completely acceptable to stand on the sides or near the stage away from the pit. But stay vigilant; every now and then, the pit will lose a guy and he’ll come out flying. Also, don’t lose your shit; the guy behind you isn’t always the guy who shoved you, so don’t be so quick to “shove back.”

In heavy metal, fans and bands are a family bonded together by the love of the music that a lot of people just don’t get. Your first show or pit can be intimidating, but if you don’t act like a dick and just enjoiy the music, the show will leave you with a tingly feeling inside … and maybe a few bruises.