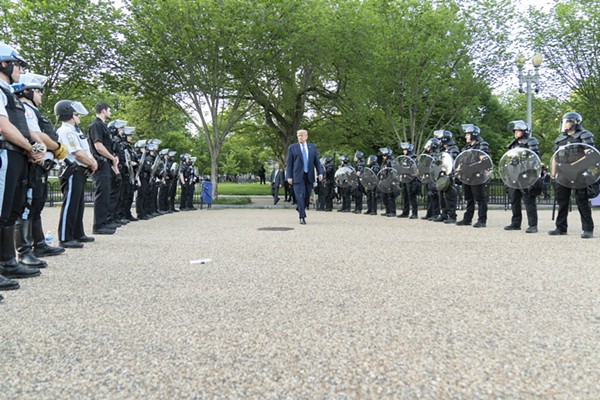 Despite the recent proliferation of memes, the early 20th-century novelist Sinclair Lewis probably never said, "When fascism comes to America, it will be wrapped in the flag and carrying a cross."

But he would have endorsed the sentiment.

Watching Hitler's rise to power in Europe while the antisemitic Father Charles Coughlin and the swaggering, dictatorial populist Louisiana Senator Huey "The Kingfish" Long ascended in the U.S., Lewis cobbled together a dystopian near-future for his novel It Can't Happen Here, which envisioned a Kingfish-like politician winning the presidency on promises to lift up the Forgotten Men — the white working class — and installing a totalitarian regime wrapped in Americana, including a Gestapo-type force called the Minute Men.

Before Lewis's antagonist, Buzz Windrip, took office, liberals fretted about his autocratic tendencies, but their concerns were deemed alarmist — a fascist dictatorship couldn't happen in America.

This was a pervading sensibility in the mid-'30s. In October 1935, the month Lewis's novel was published, the newspaperman William Randolph Hearst brushed aside anxieties about creeping fascism. That word, he argued, was merely a pejorative aimed at patriots: "Whenever you hear a prominent American called a 'Fascist,' you can usually make up your mind that the man is simply a LOYAL CITIZEN WHO STANDS FOR AMERICANISM."

It Can't Happen Here, which quickly became a bestseller, was a warning about that complacency.

What Lewis understood was that there is nothing magical about the Constitution. The document itself has no power. It binds the country only so long as we agree to its tenets: that there should be three separate but equal branches of government; that there should be freedom of speech, religion, and press; that all people are guaranteed equal rights under the law; and so on. Our democracy is undergirded by norms more fragile than we'd like to think.

Huey Long was assassinated in September 1935, and his planned bid for the Democratic nomination never materialized. FDR was reelected, and the liberal world order remained intact. Within a decade, Hitler was dead and fascism was defeated.

Eighty-one years and one month after its debut, It Can't Happen Here became popular again.

Within a week of Donald Trump's election, the book sold out on Amazon. There were significant differences between the fictional Windrip and the stranger-than-fiction president-elect — Windrip was a quasi-socialist — but there were more than a few similarities, too: Windrip reveled in big rallies. He had a propaganda machine that sought to invent its own reality. He made direct appeals to racial animus, scapegoating Blacks and Jews for the country's ills.

And liberals had spent months before the elections fretting about his illiberal tendencies, their concerns dismissed as alarmist.

Upon taking office, Trump didn't immediately imprison dissenters or dissolve states or label Congress advisory, as Windrip did. But he's shown an affinity for autocrats. He's expansively wielded executive power, like when he diverted military funds to a border wall under the guise of a national emergency. And he's often blustered like an authoritarian, even when he didn't follow through.

Over the last three-and-a-half years, the guardrails of democracy have been slowly eroded rather than eviscerated, like the proverbial frog in boiling water.

Amid the constant chaos of the Trump administration — the Mueller probe, the Twitter bellicosity, the impeachment and Trump's recriminations — we became inured to these encroachments on the rule of law and numb to statements and deeds that would've generated weeks of outrage in any prior administration but barely register now. (The president has been relentlessly pushing a baseless conspiracy theory that a media critic is a murderer, and it's little more than background noise.)

Over the last three-and-a-half years, the guardrails of democracy have been slowly eroded rather than eviscerated, like the proverbial frog in boiling water. tweet this

Throughout history, the political scientists Steven Levitsky and Daniel Ziblatt have written, authoritarians try to do three things: capture the referees, sideline key players, and change the rules. Trump has done all three: He's tried to capture the referees by purging his administration of the disloyal, most recently inspectors general who conducted investigations he didn't like. He's sought to sideline key players by intimidating the media, including by bullying the Post Office to charge Amazon more because he has a grudge against the Jeff Bezos-owned Washington Post. And he's tried to change the rules by claiming that efforts to expand voter access are rigged against him and having Attorney General William Barr game the justice system for his allies.

But two recent events have put this squarely into focus.

The first came on May 28, when Trump signed an executive order targeting social media platforms because one of them dared to (meekly) fact-check one of his false statements. (Sideline key players? Check. Change the rules? Check.) Two days earlier, Twitter had appended a note to two tweets directing people to accurate information about voting by mail, which set the president off. The next day, the U.S. eclipsed 100,000 COVID deaths, which he didn't deign to recognize; he did, however, promise an executive order reining in Twitter for its offense.

The order, likely unconstitutional, seeks to treat social media platforms that regulate speech in any way as publishers rather than content hosts, making them liable for whatever their users post. (The irony is that, under that standard, Twitter would likely have to ban the president.) This is, in short, the president using the federal government's regulatory apparatus to force private companies to allow him to spread propaganda and disinformation during the upcoming campaign.

The second, of course, is when Barr had federal agents use pepper spray and rubber bullets to clear legally assembled peaceful protesters out of Lafayette Square in Washington, D.C., so that the president could stage an awkward photo op with a Bible in front of a boarded-up church. This, just after he pledged to sic the U.S. military on unruly cities, because he is "your president of law and order."

It's that last scene that brought out the Sinclair Lewis memes. Perhaps it's too much to call it fascism, even if it's cloaked in pseudo-patriotism and holding a Bible aloft. But it doesn't feel like a healthy democracy, either.