A family slugfest of Oscar proportion 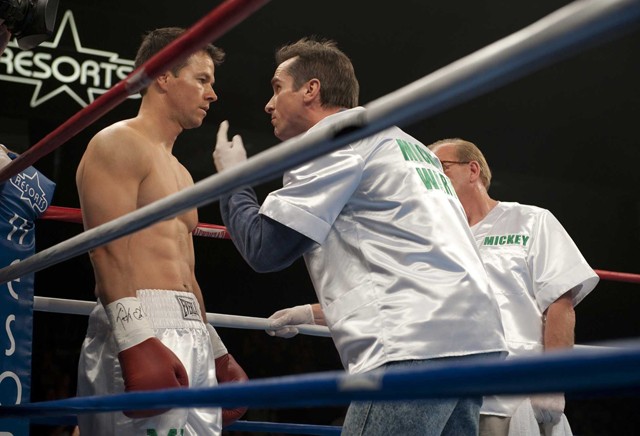 The story supposedly goes: When Phillip Seymour Hoffman (Capote) beat out Heath Ledger (Brokeback Mountain) in 2005 for the Best Acting Oscar, Ledger was heard to remark, "I thought it was for the best acting, not the most acting."

As bitchy as the comment may have been, it was the first thing I thought of while watching Christian Bale's twitchy performance in The Fighter. While Mark Wahlberg may be the star and focus of this family drama about Massachusetts boxer "Irish" Micky Ward, it's Bale, who plays his older brother Dickie, who's working up a big puddle of sweat. Bug-eyed, motor-mouthed and hyper-charismatic, the actor barnstorms his way through the film, threatening to chew up every last piece of scenery. It's the kind of performance Oscar voters slurp up and is mostly saved by the heart and soul Bale injects into his self-conscious tics and mannerisms.

Still, it's pretty obvious who director David O. Russell (Three Kings) would have preferred to focus his attention on, as Bale's hammy magnetism (and the destructive trajectory of his character's life) grab center stage in what is supposed to be Micky's ballad. And for the first half of The Fighter, Russell delivers a chaotically volatile movie filled with a rowdy, working-class sense of humor and pathos, as well as a bevy of eccentric characters. It's an entertaining and savvy mix that sharpens the point that family and neighborhood can provide both shackles and support. But as The Fighter settles into its second-half groove, things become a lot more conventional (though, thankfully, never maudlin).

Micky is an uninspiring welterweight with a killer punch, a well-liked "stepping stone" for better fighters. Selfishly mismanaged by his overbearing mother Alice (Melissa Leo), and trained by his mess of a brother Dickie, he seems destined to squander his potential. Worse, he lives in the shadow of Dickie, once known as the "The Pride of Lowell," for knocking down Sugar Ray Leonard in a highly publicized fight. Since then, however, his older brother has become a bottom-feeding crack addict, living vicariously through Micky's stalled career, and squeezing it for whatever money the family can get. That family includes seven harpy-like sisters who act as a Greek chorus for Dickie and Alice's bad ideas. Like a hurricane force wind, they so effectively bully Micky into silence it's easy to see how the young fighter would just give up trying to speak for himself — precisely why his new girlfriend Charlene (Amy Adams) is seen as such a threat. Tough-talking and independent, she encourages him to break free of his dysfunctional family's influence.

Though comparisons to Rocky are apt, Russell invests so much creativity and energy into the family squabbles and dynamics, and creates such a sense of place that The Fighter deserves many of the accolades it's receiving. Though the quartet of writers credited with scripting the film give him only a predictable and unimaginatively literal canvass to paint on, the quixotic director creates a compelling undercurrent about the unforgiving price reality can exact on those who dream too big, and the insidious ways a family can brutalize and exploit its weaker-willed members. Russell also manages to toss in cleverly ironic humor, the best of which is the use of Whitesnake's "Here I Go Again" as Micky's theme.

In terms of performance, Wahlberg is practically obligated to understate his role given the showboating he's surrounded by. Not only does Bale's fidgeting shtick loom large, Leo shamelessly struts, cusses and smirks with a cigarette perpetually hanging from her lips. It's what my former theater teacher liked to call "shmacting." And The Fighter is filled with a lot of it. Even Amy Adams, who leans hard on an affected Southie accent, occasionally gets caught up in the tempest. Still, the relationship between she and Wahlberg is convincing, grounded in a genuine mix of toughness and tenderness.

When The Fighter gets inside the ring, the results are mixed. Russell takes a TV-broadcast approach to these sequences and while the fights feel physically authentic and get away from the heightened stylizations that often accompany boxing films, he cuts away from the action too often, disrupting the drama. It's an unfortunate and, occasionally, frustrating choice.

What ultimately makes The Fighter so interesting and, at times, exciting is Russell's mostly unconventional approach to highly conventional material. Though its richly dysfunctional characters can be cartoonish, they never cease to amuse, appall and engage in equal measure.