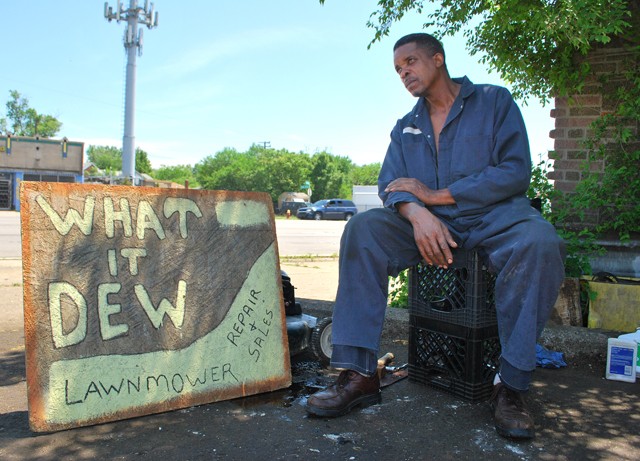 They're swarming around him today — like they always do. And though he's waiting for customers, he's getting visits from everyone else.

It's a hot summer afternoon, and Gus Mills is seated on an overturned milk crate in a deserted parking lot. A hand-painted wood sign propped on the sidewalk announces his business: What it Dew Lawnmower Repair and Sales.

For two years now, every day but Sunday, the 47-year-old spreads out his tools next to an abandoned dry cleaner on Gratiot near McNichols, and sits in the deep shade of a wild tree sprouting from the side of a neighboring building.

He'll fix your broken lawnmower on the spot, usually within the hour. Repairs are a flat $45 fee.

"It might be a couple of things wrong, but for $45 you're going home with it running, as opposed to when you take it to the other side of Eight Mile — they want $35 just for you to walk into the building." He gets about a dozen customers a day.

He works from April to August, saving most of what he earns so he can attend community college the rest of the year. He's polite, hard-working, determined to project a professional image despite his rough surroundings.

But this makes him a target for hangers-on and hustlers. In this neighborhood, where a whole lot of people don't have jobs or much schooling or much of a future, a place where scrapping or selling drugs are common careers, a guy like Mills stands out for trying to do an honest day's work. He becomes a center of gravity, like a sun with lifeless planets orbiting him.

Mothers come up and demand that he teach their son a job skill. Transients come looking for a couple hours' work. Men clutching bottles in bags pull up seats, flanking him in the shade, wasting his time and theirs, hoping for some scraps.

"I get the impression that everybody's watching me," Mills says, wearily. "Everybody comes up, they're like seagulls. And I'm tired of it. Go away — oh, man."

On some days, business gets so good that Mills could use some helpers. But few around this neighborhood are qualified. And the handful who do have skills don't have much of a work ethic. "I can't keep them. I give them a couple dollars and they're gone. Let a cat get 20 bucks, man, he's outta here. Then he'll come back, he's drunk, high and everything else."

A pickup truck roars into the lot. "Speaking of the mechanics," Mills says, "here they come now."

The driver is young, maybe early 20s, and he's got the sly smile of a schemer. His passenger is older, dumber, possibly drunk and is missing all his top front teeth. He gets out of the truck and roams among the lawnmowers and the tools spread around Mills, while the driver distracts him with questions about a guy in the neighborhood, about the weather, about that old lawnmower sitting there. It's as though they can't decide whether to hustle him or work for him.

"You still got my number, right?" the driver asks. Mills shakes his head no. "I ain't seen you," he says. These two don't show up enough to be taken seriously as potential employees. "If I don't use a number within 30 days, it deletes." The driver's face becomes quizzical. A phone that deletes numbers on its own?

"But that's your new phone!" he protests. Mills just carries the ruse further. "I shouldn't even have said 30 days. If I don't see you within 10 days it deletes it," he says with a straight face.

They drive off, and Mills shakes his head.

"I call them Heckle and Jeckle," he says. "They're annoying. I mean, you see how they talk?"

He gets other kinds of attention too. A beat-up pickup truck pulls up, driven by a middle-aged woman. She's a neighborhood junk collector, and she's got a thing for the lawnmower repair guy.

"Hey, you got a cell phone on you?" she asks, without saying hi. "My sister wants to ask you about something." He tells her no, he has no phone. Meanwhile, his phone pokes slightly out of his pocket.

The woman visits often, usually on some pretext to talk to him. Today's it's supposedly a relative who has a question for Mills. The woman dials on her cell phone and hands it to him. "Tell her you the lawnmower man," she says. There's nobody on the other end, though. He gives her the phone back. She frowns, suddenly promises to return and drives off, as stacks of appliances and metal sheets rattle in the back of her junk truck.

In this neighborhood, a guy like Mills is a catch. He has a job, he has goals, and he's respectful. For someone like the junk lady, he's gold. "But she's probably backed off a little," he says with relief.

Mills spends his days in this lot because he wants the building that sits here. As soon as the dry cleaner went out of business, he had his eye on it. It's got a big parking lot to the side and plenty of room for a waiting area and a workspace. Wait until it goes into foreclosure or tax lien, he figures, then snap it up and open his own small engine repair shop. None of that has happened yet, though.

He's not the only one eyeing that building. Scrappers noticed it too.

"Scavengers, man, they just demolished it," he says. "I've called the police on some guys going in there. And I have had some altercations. They wanted to be belligerent to me — 'Mind your own business' and blah blah. I have to tell them, 'You guys don't scare me.'" But the electrical system is already gone. So's the plumbing. The building becomes more worthless by the day.

A thin, sweaty little man rides up on a bicycle and begins tinkering with his bike, using Mills' tools without asking. Mills knows him; the man volunteers to do cleanup for him sometimes. It's either ironic or nervy. "He's the same joker — I wanted this building, and he stripped it," Mills says. In this rough area, a dead building is up for grabs. So is everything else.

"Oh, my goodness," he says. "You name it, brother; you'll see it through here. This is the most action that any one man should be able to see unless he's going to Vietnam or somewhere."

Last year he watched a man running past on Gratiot get shot in the back and collapse in the middle of the road in front of him. Just the other day he saw a band of kids chasing someone, shooting wildly. "The newer dudes, the younger kids nowadays, man, they can be bananas coming through here, running through here. Just as long as they stay away from me."

Compared to that, a scrapper is benign. And this one sits right next to the man whose dream he's dismantling, pipe by pipe.

A few days pass, and Mills sits in his spot under the high sunshine, but no customers pull into the lot. The pests are intimidating to people, and today the pests are swarming.

There's little Mills can do about them. This abandoned lot isn't his. It's everyone's by default. He could move to another spot, but this is the neighborhood where he grew up, and this is where he wants to be. And he wants to keep watch on that building.

"It's crazy. The little peace that I want I just can't get to," he says, defeat in his voice. "I'm just tired."

As the hot day wears on, four raggedy guys amble up and sit behind him, talking among themselves, while Mills just sits silently with his head in his hands and his eyes looking down.