The Girl With the Dragon Tattoo

By the book - Stylish but lacking, this by-the-numbers film adaptation could have done more 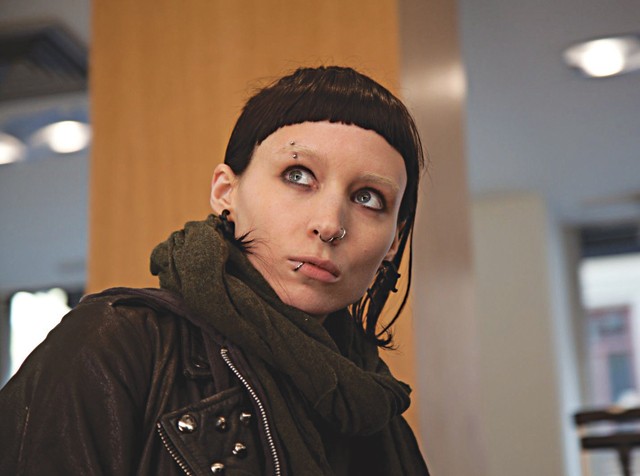 The Girl With the Dragon Tattoo

Though it doesn't bring with it the box office clout of the Twilight books (maybe it's the rapes, incest, serial killings and bisexuality), Stieg Larsson's The Girl With the Dragon Tattoo is its own kind of juggernaut, with 15 million copies in print and a small legion of fanboys eager to support the film's director, David Fincher (The Social Network, Fight Club, Benjamin Button), holiday returns should be good for this slice of psychopathic entertainment.

But what makes Fincher's involvement so perplexing is that he seemed to put the serial killer genre to bed with Zodiac, a meditation on the grim toll of pursuing boogeymen for reasons other than justice. It made the perfect thematic bookend to his Se7en, a wickedly moral deconstruction of the genre, implicating genre fans in the villain's self-aggrandizing goals. On the surface, Fincher seems like a natural fit for the brutish, nihilistic dread that characterizes Larsson's novel. But even with its strong-willed female lead (terrain Fincher has explored in other studio-driven work like Panic Room and Alien 3), he's clearly above the material. As gorgeously composed as The Girl With the Dragon Tattoo is, it feels like an artist slumming for a paycheck. Neither fans of the book nor fanboys who love the director will be disappointed — which tells you something about the commercial instincts on display.

A-list screenwriter Steven Zaillian has shaved, cut and pasted the novel's plot elements while remaining shackled to Larsson's convoluted and exposition-filled tale. Disgraced journalist Mikael Blomkvist (Daniel Craig) is hired to investigate the death of Harriet Vanger, who disappeared from her family's island enclave nearly 40 years ago. Her uncle Henrik (Christopher Plummer) believes that one of his odious relatives, many of whom are Nazis, is responsible. (You just can't beat Nazi evil as fuel for your soap operatic fire.) While searching for the truth, Blomkvist teams up with computer hacker Lisbeth Salander (Rooney Mara), a skulking badass bisexual who's been abused by both individuals and the state and exacts righteous fury against men who hate women (the original title to Larsson's novel).

As drama, The Girl With the Dragon Tattoo's mystery is humorless and relentlessly linear, diligently doling out backstory and clues without surprise or ambiguity. There are no blind alleys or red herrings, just a gorgeously stylized march to a conclusion that isn't all that hard to figure out. It's the kind of drama that's written in all-caps and underlining, should you miss any of its points. It also boasts a lurid literalness that inspires Fincher to — I kid thee not — turn a cat into a bloody swastika.

On a technical level, however, the celebrated director goes beyond the call of duty, bringing his crisp, emotionally detached visuals to Larsson's pulpy supermarket paperback thrills. The land of IKEA has never felt more gloriously desolate or profoundly dysfunctional. Similarly, the brilliantly austere score from Atticus Ross and Trent Reznor provides an unnerving layer of menace. Unlike Niels Arden Oplev who directed the Swedish film version, Fincher doesn't revel in the book's more lurid acts, instead bringing a sober darkness that almost elevates the material. He's is more interested in those who perpetrate violence rather than the violence itself, and so, even during the film's most salaciously vile assault, Fincher avoids glamorizing the act by putting the focus on Lisabeth's anguish.

Still, there's no getting around the banal tawdriness of Larsson's novels. Lisabeth Salander is a feminist Batman as imagined by a middle-aged male. A damaged survivor who can outthink and outfight her adversaries (who are almost always men who do sexually violent things to women), she's certainly an appealing character to explore, but the books are a strange concoction of anti-misogynist wish-fulfillment, sexual sadism, sexist daddy issues and authorial self-mythologizing, with Salander delivering her brutal vigilantism on those who deserve it while abandoning her poorly explored (but titillating) lesbianism to bed Larsson's noble alter ego, Mikael Blomkvist.

Mara takes her mostly nonverbal character and depicts her as a wounded and extremely dangerous animal. Retreating from others instinctively, she embodies the rage, fear and vulnerability of a woman who has suffered too much at the hands of men but refuses to be a victim. It's a feral and bravely physical performance, and Craig is smart enough (and good enough) to get out of Mara's way.

But while Fincher has drawn an Oscar-worthy performance out of his actress, he's also fetishized her — turning her into a trashy angel of vengeance. As sexual as she is sexualized, it's hard to tell where Lisabeth's grrrrl power ends and the objectification begins. Worse, Zaillian and Fincher unforgivably wrap their film up by turning their Hot Topic heroine into a romantic dupe.

For all its meticulously crafted mood and mise en scène, The Girl With the Dragon Tattoo is little more than great filmmaking in service of bad art. This is made all the clearer by the film's astounding opening credit sequence. Set to Reznor's and Karen O's unholy cover of Led Zepplin's "Immigrant Song," it's a hallucinatory nightmare of transformation, as black lava bodies melt and mix with disturbing sexuality. Nothing in the film that follows matches the ferociously sinister and strangely alluring imagery.