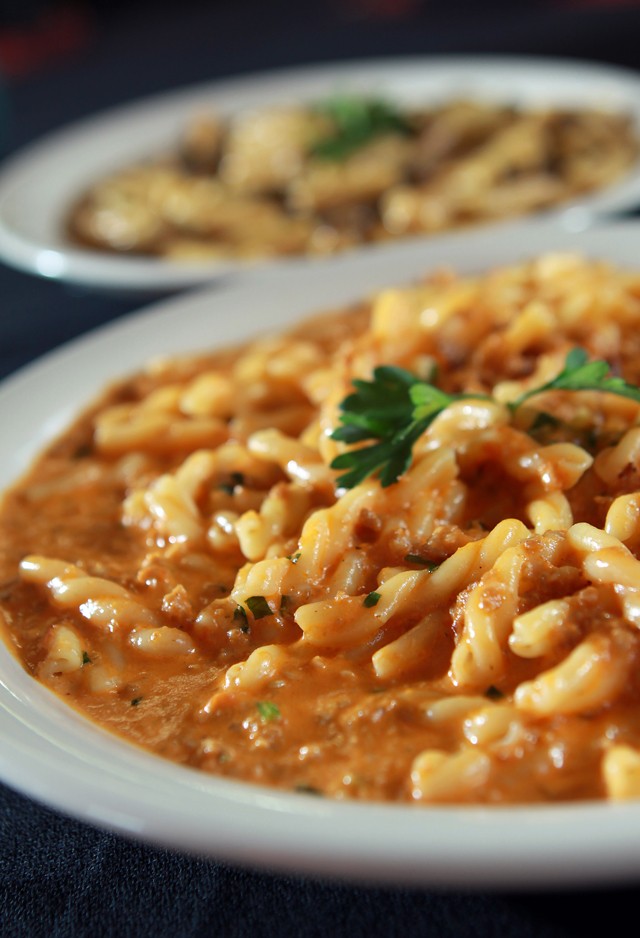 I pondered how to write about Magdaleno without sounding snobbish, but failed. So, baldly: I didn't expect this level of culinary ambition in Lincoln Park. True, next-door Allen Park has the venerable Moro's, but I'm just saying.

Chef-owner Ernesto Magdaleno, born in Puebla, Mexico, has worked in New York's Little Italy, and for seven years was a chef at top-flight Bacco Ristorante in Southfield. Now he's intent on replicating the elegance of the dishes he practiced there, at half the price.

The result is a disconnect: You just don't expect such ingredients — house-made pastas, for instance — and such from-scratch attention to detail in a place with no liquor license. Effort is clearly being made on the decor: the walls painted cream with dark red arches over the windows, burgundy tablecloths and cloth napkins, faux tiger lilies on the tables, but you can't say the site formerly occupied by El Mariachi is romantic — one square room, well-lit.

A couple of visits don't do justice to the longish menu. Dinner starts encouragingly with garlicky cannellini bean dip, warm and thick, to scoop with crisp, thin crostini. The flavors are strong and the price is zero. Garlic bread comes later, on both my visits served between the soup and the entrée.

Dinner salads can fill you up. Note again the attention to ingredients: how often do you find Bibb lettuce in a salad that costs $7 ($5 at lunch)? I loved the house salad, which features crisp pancetta, still warm, garbanzo beans, biting red onion, strong Gorgonzola and a Dijon vinaigrette. Other choices are antipasti and Caesar.

Besides embarrassingly low prices and excellent tastes, the other thing to know about Magdaleno is that you'll end up with plenty of food. Both the meat and the pasta entrées come with soup or salad, and the soups are large and thick, full of goodies cut with a generous hand.

Chicken noodle sports big chunks of white meat; you can taste the white beans and the zucchini in the hearty minestrone; pasta e fagioli comes in a creamy version. Most unusual is the slight nuttiness of cream of cauliflower.

Of Magdaleno's 13 pasta dishes, 11 cost $10 or less. They are gems of fresh flavors. Take a simple ricotta ravioli — the little pillows are bathed in a tomato sauce that's not bright red but mellowed with cream. Gemelli Norcina, the signature dish, is twisted pasta with a sauce made of house-made sausage, truffle oil and tomato cream sauce — a disconcerting orange color but sublime. Cavatelli funghi is for mushroom lovers, with wild ones and porcini in a strong, winy sauce.

The humbly named seafood spaghetti throws clams, mussels, scallops and shrimp into a light tomato-white wine sauce. If it doesn't rate with the best cioppino ever, it's taking a shot.

Besides such old favorites as spaghetti carbonara, pasta with clams, and lasagna or tagliatelle Bolognese (meat sauce), there are also lesser-known dishes such as penne with baby eggplant, fresh mozzarella and marinara, or tortellini stuffed with ricotta and served with a bacon cream sauce.

I tried only one of the meat dishes. When veal piccata emerged with a thick sauce, I was concerned, as I've only seen this simple dish (lemon and white wine are the main flavors) with a thin sauce. But the lemony taste was excellent, and the veal was served with artichoke hearts and vegetables that included sweet and hot peppers. (When I looked it up, I found that Emeril makes his veal piccata with a thickened sauce, so I bow to my betters.)

There's also a seafood soup with salmon, calamari and a lot more; veal Marsala, Parmesan and Milanese (the latter topped with arugula); and, if you must, a New York strip. Hell, there's even an American section with ribs, wings and an $8 half-pound ground sirloin burger.

There is no pizza at Magdaleno, perhaps in deference to the pizza place across the street.

Desserts include sorbets and gelatos (try the hazelnut), a delicate tiramisu and a lovely house-made cheesecake, not overly sweet.

Magdaleno has been open since July, and I hope it becomes a cult favorite — and I'm confident diners can figure out an easy way around the lack of a liquor license (he's working on it). If dinners are a bargain, lunches are a steal, with pasta $6-$9 and most meat dishes less than $10.