The Great Foreskin Debate: Why the Midwest leads the world in infant circumcision and what the hell that says about us 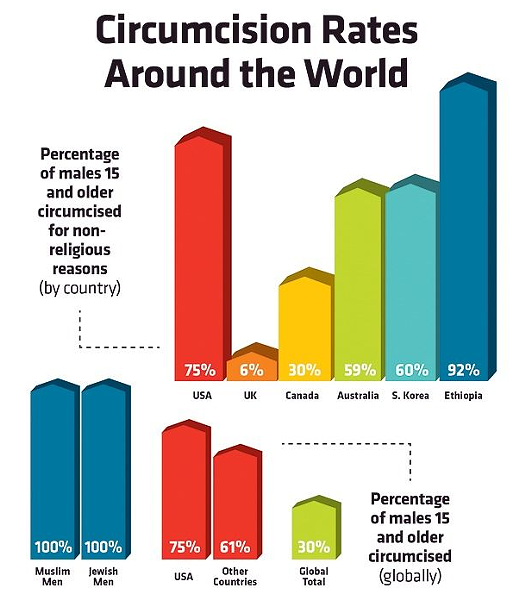 It's Just a Family Tradition

Still, parents, doctors, health organizations, and even insurance providers search for reasons to cut or not to cut. Tradition might be one reason that the surgery is so prevalent in the Midwest, despite declining rates of circumcision in the United States overall. Another, Cannon notes, is that the Midwest isn't always the most trendy of regions.

"The Midwest isn't as culturally on top of things as the rest of the country," says the Pittsburgh native. She cites the procedure as being a "manly" tradition that parents consider to be the right thing to do, since their sons might be made fun during gym class or scorned by potential mates.

"The disease of the decade is always curbed by circumcision," Cohen says.

While the tradition remains strong in the Midwest, across the country rates of newborn circumcision have been steadily declining since the late 1970s, with a few upswings in the '80s. The Center for Disease Control released a report in 2013 that shows the spikes and drops in infant circumcision over the last 40 years, and while circumcision was at an all-time high in the mid-'80s, by 2007 its prevalence dropped to a little more than half the population, with the Midwest keeping the average up and the West showing serious declines in the procedure. In fact, circumcisions in the West decreased to less than 35 percent of newborn males in 2007, while the Midwest spiked to nearly 85 percent.

Several other factors go into a region's newborn circumcision rate, including ethnicity, insurance, and Medicaid. With a large Hispanic population and several states that have stopped paying for circumcision through state-funded insurance, it's no wonder their rates are dropping so rapidly, making the difference between the Midwest and the West around 50 percent.

A World of Difference

Around the world, circumcision ranges in popularity. According to a report by the WHO, while most men are circumcised in the Middle East, it's rare that a mother will circumcise her son in South or Central America. Studies show that around 11 percent of men are circumcised in Costa Rica, Mexico, and Panama and as few as 7 percent of men are circumcised in Brazil and Colombia. The surgery is also on the decline in the United Kingdom, where a study done in 2000 found that less than 16 percent of men between the ages of 16 and 44 were circumcised, and the majority of those were Muslim or Jewish. In Korea, the practice has been on the upswing since the United States established a trusteeship with the Republic of Korea in 1945. Before that, circumcision was also unheard of there. In Indonesia, Pakistan, and Bangladesh, it's done almost universally. Most Africans circumcise, but it's typically done during adulthood and has been since long before the WHO recommended it. There, many tribes consider it to be a rite of passage from childhood to manhood. Some see the foreskin as feminine, and cutting it off signifies that a boy is ready to take on his manly duties.

The Jewish faith requires all infant males be circumcised by their eighth day of life to show their covenant with God. Rabbi Doniel Neustadt serves the Orthodox Jewish community in metro Detroit and says he hasn't seen a decline in religious circumcisions, despite nationwide trends.

The rabbi also notes that circumcision done in a hospital has no religious meaning, and as for health reasons, that's up to a physician to decipher.

According to Father Jim King of St. Mary's Antiochian Basilica in Livonia, the practice of circumcision isn't something that's regularly talked about in his church, though he believes that a chapter in Acts essentially states that it's not necessary for Christians to circumcise.

"It's a personal preference, I think," he says.

For Muslims, however, circumcision is required. The practice is similar, but not identical to, the Jewish ritual.

"My mother told me when I was younger that [having sex] with an uncircumcised man is like eating pork," says Lina Hammad*. "It's not halal."

For religious, cultural, or cosmetic reasons, humans have been circumcising men since the beginning of recorded history. The WHO displays an ancient Egyptian drawing depicting circumcision on the cover of its packet on the surgery's global trends, determinants of prevalence, safety, and acceptability.

Jacquelyn Williamson, an Egyptologist and research associate at the Harvard Semitic Museum, describes the image attached to the WHO's packet on circumcisions as "a stone relief from the tomb of the Official Akh-ma-hor in Saqqara, dating to Dynasty VI." She says it's one of the few representations we have of what is likely a circumcision procedure and that the Egyptians probably practiced male circumcision, as statues and relief of nude men demonstrate circumcised penises."

But what did circumcision mean to these people?

"We do not know very much about the practice in Ancient Egypt, although if it did happen it appears men were circumcised at puberty," says Williamson.

That statement seems to apply to the circumcision of many infants in the Midwest, the United States, and the world today. Parents circumcise following the tradition of their grandfathers, fathers, and brothers, but what does it really mean? With no clear recommendation from the Center for Disease Control, the American Academy of Pediatrics, or the World Health Organization, is there really enough thoughtful evidence available to condone violating a child's inherent right to an intact body?

"Our reptilian brains want to belong," says Van Howe. "It's more psychological than anything." — mt

* Names have been changed to protect those speaking about culturally sensitive issues.