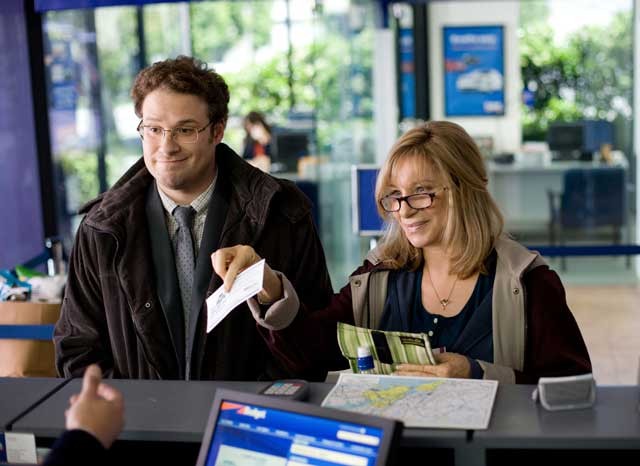 Like Chinese restaurants,  The Guilt Trip gives Jewish-Americans an excuse to get out of the house on Christmas Day. And Bubbe can come along too!

Seth Rogen plays Andy Brewster, an organic chemist who is desperately trying to find a chain store willing to carry his new Earth-friendly cleaning product Scioclean. While visiting New Jersey to see his cliché of a Jewish mom, Joyce (Barbra Streisand), Andy learns that he was named after her first love rather than his long-deceased dad. Impulsively, he tracks down mom's old flame in San Francisco, inviting Joyce on his cross-country car trip under the pretense that she can help him sell his product.

Of course, for the next eight days, mother and son end up driving each other completely meshugge. Complaining, nagging and bickering along the way, they also come to recognize each other as individuals and how much they truly love each other. Yep, it's a comedy determined to make you walk out of the theater feeling verklempt.

To explain how The Guilt Trip is highly predictable and inoffensively diverting would be an exercise in futility. Either your mom is into this sort of thing or she isn't. That'll determine whether you go. If you do, Dan Fogelman's (Crazy, Stupid Love) pulled-from-real-life script keeps things mercifully short and sweet, sketching out 85 sweet-natured minutes of schmaltz and shtick. Rogen and Streisand make a good team, and — though there aren't any uproarious laughs — there is an engaging mixture of affection and embarrassment that fuels their relationship. The movie doesn't have a mean bone in its body.

Surprisingly, the notoriously vain Streisand, who is in her first leading role since 1996's The Mirror Has Two Faces, relaxes into her cloistered suburban character, perfectly capturing the way well-meaning parents inadvertently annoy and humiliate their adult children. It's an ego-free performance that both endears and amuses. Rogen is mostly left to shift uncomfortably in his seat and clumsily promote his product, but maintains his impeccable sense of comic timing.

Where The Guilt Trip really shows its shortcomings is in Anne Fletcher's (The Proposal, 27 Dresses) bland and underheated direction. After a somewhat promising setup, mom and son hit the road and we endure nearly 30 minutes of broad culture clashes. The jokes are few and far between, and the scenes inside the car lack the imagination and spontaneity a more comically attuned director would otherwise bring. The obvious comparison is Trains, Planes and Automobiles, which, despite the banal sentimentality of its plot, managed to create some memorably funny moments. Fletcher has no such instinct. Instead of trusting her actors to experiment, improvise and riff, she actually pushes their liveliest exchanges into the final credit outtakes in order to dutifully march them from one formulaic road movie convention to the next.

In the end, The Guilt Trip is a case where the talents of its cast compensate for the failures of its content. After following Streisand and Rogen for eight days of emotional ups, downs and disclosures, the characters arrive exactly where we knew they would: Mom is happy. Son is happy that Mom is happy. I suspect that taking your own mother to this film will achieve similar results. mt

�If not loaded with belly laughs, at least The Guilt Trip is short, sweet and endearing.