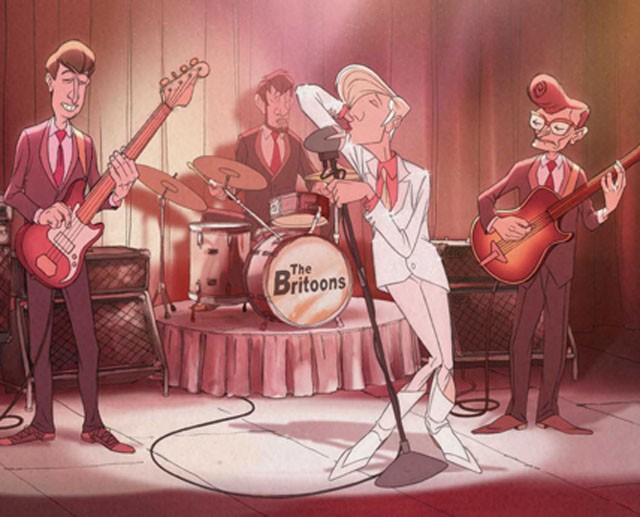 If you're not familiar with the work of French director and actor Jacques Tati — and that's probably the majority of those reading this review — then Sylvain Chomet's (Triplets of Belleville) soulful and melancholy adaptation of an unmade Tati script is a lovingly animated homage to the silent film era. To those who know and admire Tati's work, however, The Illusionist is a beautifully slight but misguided tribute.

Using Tati the man as his inspiration, Chomet presents a struggling magician named Tatischeff (Tati's birth name), a man who ekes out his living performing at fading music halls across Europe. At a pub in rural Scotland, a small gesture of generosity wins him the stowaway companionship of a waif-like chambermaid. The two wash up in Edinburgh, where the aging magician lands a gig alongside a coterie of vaudevillians. Moving into a hotel with a suicidal clown, hup-hupping acrobats and a sad ventriloquist, the Illusionist comes to care deeply for the young girl, lavishing her with more and more gifts. Gradually, however, as Tatischeff loses his place in the world, the girl finds hers. He sacrifices everything as she finds romance with a young man her own age.

The Illusionist is a quiet, bittersweet slice of nostalgia that requires its audience to adjust to its meandering, episodic pace. Undemanding yet always engaging, this exquisitely animated, semi-silent movie (there are mumbled fragments of dialogue) makes clear that there's still room in the world for Chomet's extraordinary cartoons. Every two-dimensional frame bursts with impressionistic delight, as slender cel-painted figures move with uncanny realism. So remarkable is his animation, you would swear Chomet used motion-capture technology to get Tati's gestures and movements while he was alive (he died in 1982). Similarly, his 1950s Edinburgh is a striking and miraculously detailed cityscape awash in gorgeously water-colored weather as wonderfully oddball characters shift and fidget along its streets.

But unlike Tati's work, The Illusionist trades more in poignancy than invention. Not only is its story more downbeat and sentimental (one of the reasons Tati chose not to make it) but Chomet is never able to attain the delightful laughs such films as Mon Oncle or Mr. Hulot effortlessly achieved. Though there are numerous instances of whimsy — particularly from a bitey, scene-stealing rabbit — The Illusionist never generates more than light chuckles. Its best scenes come early, as Tatischeff is forced to watch rock 'n' roll destroy his livelihood. It's hard not to view these very funny moments as Chomet's sarcastic critique of a world no longer interested in what he (or Tati) have to offer, a metaphorical jab at the high-gloss soulessness of CGI and 3D animation.

Unfortunately, Chomet's hand-painted cartoons are not well-suited to Tati's style of physical humor, lacking his casually frantic awkwardness. More tragically, the filmmaker isn't inventive enough to exploit some of the script's more promising setups. One can only imagine what the bilious Tati might have concocted for the film's acrobatic muralists as they paint-by-trapeze a gigantic advertising billboard.

Still, The Illusionist is a visual delight that rises above its flaws. Though it first comes across as an emotionally distant yet good-natured nostalgia trip, it sneaks up on you with a heartbreaking message of loneliness and loss. Like a trick gone awry, Chomet's unexpectedly melancholic sleight of hand produces the kind of magic that haunts you long after the lights have gone up.