The Insane Clown Posse celebrate the 20th anniversary of Hallowicked

No Rest for the Hallowicked 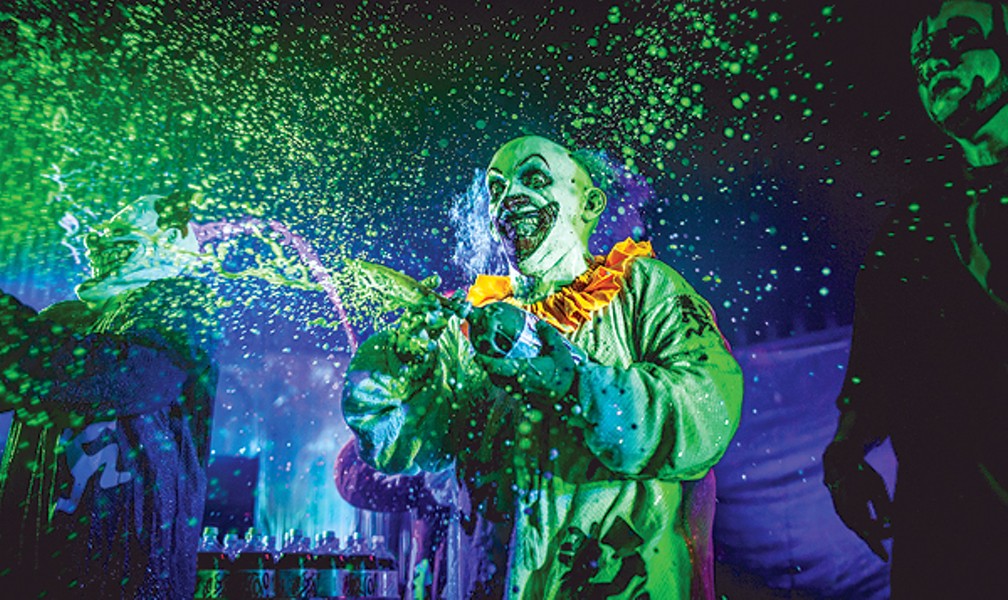 We tentatively pull up to an unassuming building in Farmington Hills, unsure if we've arrived at the right place. The address is right, but we were kind of imagining it to be a bit more ... Juggalo. Nothing about the exterior of this sleepy, suburban office building leads us to believe that this is the center of the Juggalo empire, the home of the Insane Clown Posse.

This is ground zero for the notorious hip-hop duo, Joseph Bruce (aka Violent J) and Joseph Utsler (aka Shaggy 2 Dope), and the people of Psychopathic Records.

"This was our ultra-devastating conference room before we downsized," explains Utsler when we arrive. "Now this is basically a Halloween USA."

Indeed, except for the conference table in the center of the room, it would be hard to tell it apart from any of the chain Halloween costume stores that open during this season. All along the walls are rows and rows of racks containing all number of costumes, masks, props, and other decorations —clowns, monsters, cowboys, and everything in between. Aside from the Gathering of the Juggalos, the "Woodstock of the Juggalos" held each summer, Halloween is the big holiday for these guys — and it shows.

This year marks the 20th anniversary of Hallowicked, ICP's annual Halloween gig. (The Gathering only just celebrated its 15th anniversary.) We're here to ask the guys to take us back to that first Hallowicked, and some of their finer memories of the event throughout the years.

It all started back in 1994. "At the time 96.3, the radio station, was playing Nine Inch Nails and stuff like that, but they had our song 'Dead Body Man' in full rotation," Bruce explains. "It was at the top of every countdown."

"It took over 'Keep 'em Separated' by the Offspring," says Utsler. "I remember that."

"For like two or three or four weeks, we were all over the radio on the station," says Bruce. "That was a crazy feeling for us." But then one day, the station just stopped playing the single.

Bruce and Utsler wanted to keep the momentum going, so they booked a Halloween show at the Majestic Theatre, dubbed it "Hallowicked," and recorded a special Halloween song that would be given on a CD to all attendees — the single "Dead Pumpkins."

"That song is now a classic in the Juggalo world," says Bruce. "And we gave it away that night." They decided to do another Halloween show the next year, and recorded another Halloween song ("Mr. Rotten Treats"), and by then it was officially on.

Bruce explains that was back during Devils' Night heyday in Detroit, when city officials enforced curfews to try and curb the rash of Halloween arsons plaguing Detroit.

"Back then they used to have those really tough curfews too, but we fucking packed it in," he says. "We did a bunch of shows and we made it tough on a lot of people, but people came out."

Hallowicked has been juggled between different venues around town throughout its two decades of existence. It's now held at the Fillmore, but it's also been held at Saint Andrew's Hall, the Royal Oak Music Theatre, and a now-defunct venue on Gratiot called the Ritz.

"They turned it into a giant bowling alley now," says Bruce of the Ritz. "I miss that building. That shows how long we've been around, and we're proud."

Utsler remembers the Ritz for its particularly low roof, which made ICP's tradition of throwing Faygo into the audience difficult. "The roof was low, and it was packed," Utsler says. "They put 2,000 people in there, as far as you could see on both sides. So you had to throw the Faygos just above their heads without hitting the roof. That's where we really honed ... our (Faygo-throwing) skills, playing venues with low ceilings."

But the Ritz had another architectural curiosity as well. "I remember in the dressing room, the toilet water was piping hot," Utsler says. "I don't know why, but if you had to pinch a loaf it was just hot."

They look back on those days fondly, even though they could only tour as far as their car could take them: Detroit, Flint, and Toledo.

"We used to barely get through a three-city tour," says Bruce. "The insanity when we were younger — doing flips off the fucking speakers and shit." In fact, one year Hallowicked was postponed because Bruce got a concussion and broke his collarbone in four places after stage-diving off a speaker stack.

These guys truly are martyrs for their art. "I can't count how many times we got blasted in the face with a two-liter," Utsler says.

"It's like a punch in the face with a glove," says Bruce. "Especially at the end of the show, when you're standing up front — man, you just get pelted with shit. The trick is you gotta front like it had no effect. You can't give that kid the satisfaction that he fucked you up."

But just because they take it, doesn't mean ICP won't dish it, too. "We can shoot them way to the top of the fucking roof," Bruce says. "Don't think we can't."

"We've got it down to a science," Utsler says.

We ask if ICP's early associations with Halloween are responsible for the rise of Juggalos, the ICP fans who paint their faces in clown makeup. As Bruce notes, "(Halloween's) the only time we make sense, with our painted faces."

Utsler says in those days, fans were painting their faces, but they hadn't yet started calling themselves Juggalos. He says it's hard to pin down exactly when the rise of the Juggalo occurred. "It just happened organically," he says. "You can kind of estimate when it happened, but you can't put your finger [on it] exactly."

"We know our shit is an acquired taste. It ain't for everybody," Utsler says. "You ain't gonna see us opening up for somebody else and a bunch of people having to sit through our music. If we go on anywhere, we're going on last so that you leave before we play."

Though he might be biased, Bruce thinks everybody should see an ICP show, at least once — Juggalo or not. "There's nothing else like it," he says. "It's like saying that everybody needs to see a Gwar show, even if you're not into the music. You still want to see the show."

This year's Hallowicked will not only once again feature a unique Halloween-themed single, but ICP is also releasing a 20th anniversary double-CD compilation of all of the past Halloween singles. The comp will be sold on tour and in the ICP online store, but Utsler says it's the limited-edition Hallowicked single that should get people excited.

"To have that actual giveaway, that single song given to you at the concert, those are what people want collect," he says. "I've seen [fans with] folders of them."

Their Juggalo fandom is a phenomenon the guys say still amazes them. "One day when we're mad old, they'll have their own conventions, like Kiss conventions," says Bruce. "If you were to ask, 'What's the greatest thing we've ever done in our entire lives?' it would be, besides having our kids, influencing those people — those Juggalos.

"ICP, for me and Shaggy, that's the greatest thing we've ever done," he says. "Those are people. We're affecting their lives, even if it was just for a summer. 'I was a Juggalo one summer, that's where I met such-and-such. We'd throw Faygo at the concerts ...' That's a part of their history forever. Even if they become a fucking politician or something or win a Nobel Prize, the fact is we played a role in their lives."

And though Juggalos may be a tight-knit family, that doesn't mean they're exclusive.

"[People] think they're gonna go to an ICP concert and get beat up if they're not a Juggalo," Bruce says. "That's just ridiculous, man. It's totally opposite. It's a good fucking time.