The meaning of Dr. K.

The crank who made us rethink how lives should end 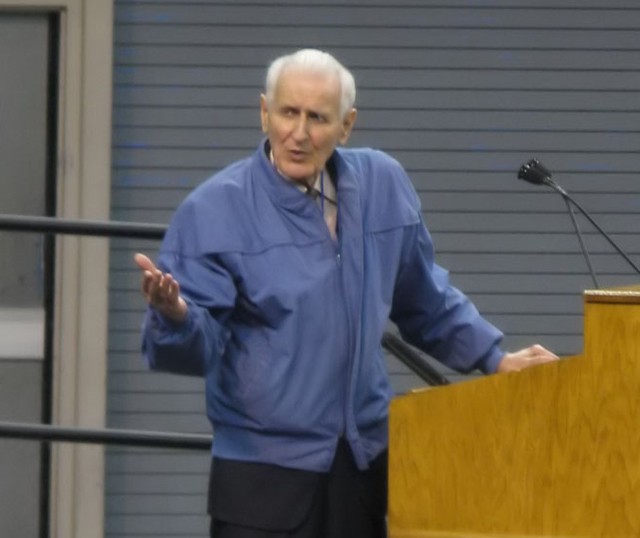 Very few people knew this, but a wealthy woman from California fell in love with Jack Kevorkian soon after he finally got himself convicted and sent to prison back in 1999.

Her name was Fuensanta Plaza, and while her name sounded like a shopping mall in Los Angeles, she was actually a Venezuelan who had lived many years in Switzerland. She would show up monthly, sometimes staying in the Townsend Hotel, and would take a limousine to see Dr. Death.

She was in her early 50s, highly educated, multilingual, had an exotic Mitteleuropean accent, and, with her dark hair and very white skin, could easily have fit in on the set of The Addams Family. She felt they were destined to be. Sometimes she talked as if he would be released and they would marry. Other times, she had visions of them ending it all together.

Once, she even mentioned smuggling some poison into prison, slipping it between the bars and biting it together, which, besides being practically impossible, given that they search you at Jacktown, smacked uncomfortably of Adolf and Eva's bunker farewell.

"Do you know what first brought us together?" she asked me once. "It was when we found out that we agreed that nobody who hated children and dogs could be all bad!" she said, laughing. I decided not to suggest a trip to Cedar Point.

For a while, the good Dr. Death looked forward to her visits; she was well-read, intelligent, and morbidly witty. She fooled herself (as other people have) into thinking that he cared for her. Kevorkian was bored in prison, and needed someone to amuse him. He was, however, incapable of forming any kind of deep, lasting human attachments.

Eventually, I think the senorita realized this. What really disillusioned her, however, was his failure to follow through on his promise to starve himself to death. Kevorkian had vowed for years to do that if he were ever imprisoned.

Once on the cellblock, however, that didn't look quite so appetizing. On one of the few occasions I talked to him during his prison years, he confessed a soft spot for "those chewy, rubbery cookies" they had in the prison cafeteria.

When Fuensanta realized Dr. Death wasn't ready to put his cyanide where his mouth was, she was scandalized. "He is killing Kevorkian so that Jack may liff!" she spluttered, accent thicker than usual. With that, she flounced back to California, where she became a devotee of the Norse gods.

I'm not making that up. Last year, she went to meet Loki. I don't know if she did self-medicide, though she told me once that she had vowed not to live to see 60, and she was three months short of that milestone when she entered Valhalla.

Last week, Jack Kevorkian joined her in what he believed would be eternal nothingness. Though he only talked to me once after he got out of the slam four years ago, (he said I was "too objective"), I once knew him as well as, or better than, any other journalist. I covered all his trials for The New York Times and did major pieces about him for Esquire and Vanity Fair.

He was, indeed, an eternally colorful character, even if the palette had heavy black accents. Now, however, his personal story is finally over, and it is time to start asking:

In a sense, Fuensanta was right, in that Kevorkian the trailblazer had ceased to exist some time ago — but not because he refused to commit suicide in jail.

When he died last week, I was at Stirling Castle in Scotland, cell phone-free so that I could imagine myself as a medieval Scottish warrior. My significant other had no such fantasies, and so she got the call. When I found out, I mentioned Dr. Death's demise to an Israeli traveler.

"I thought he died a long time ago," she said. She wasn't alone; from time to time, people in Detroit have asked me whether he was still alive, or whatever happened to him.

In fact, during the last few years, Dr. Death had largely lived as a cranky recluse, dividing much of his time between the Royal Oak Public Library and a cheap apartment across the street. Three years ago, he launched a bid for Congress as an independent, before characteristically losing interest in his own campaign, finishing with 3 percent of the vote.

Ironically, his reputation — and that of the cause he championed — might be vastly different if he had died when he predicted he would. Years ago, he insisted he would never live to be 70. "Nobody in my family has, and I won't either," he said.

When he did turn that magic number, on May 26, 1998, he — with the necessary help of attorney Geoffrey Fieger — had accomplished something astounding: he had made his brand of physician-assisted suicide de facto legal in metropolitan Detroit, if not all of Michigan. Prosecutors indicated they would no longer charge him in assisted suicide cases.

Other doctors were talking about also openly helping patients. But there was always a reckless and self-destructive piece of Jack Kevorkian. He began assisting patients with more dubious physical or mental problems. Finally, he insisted on performing euthanasia on a victim of Lou Gehrig's disease.

He deliberately baited prosecutors by videotaping the act, sending it to Mike Wallace of 60 Minutes, and — just to make sure he got himself convicted — firing Fieger, the man to whom he owed his freedom and his international celebrity status.

Kevorkian insisted on defending himself. This time, his client really was a fool. As they led him away after conviction, he grinned at me and said: "Now I've got them right where I want them."

But the prosecutor noted: "Prisoners don't usually get to hold press conferences." Away from the cameras, Jack Kevorkian was soon forgotten. After Sept. 11, and the wars in Afghanistan and Iraq, death-on-demand didn't seem quite as sexy. By the time his new lawyer, Mayer Morgenroth, negotiated his release eight years later, Kevorkian had been largely forgotten.

Yet that doesn't mean he didn't have an impact. Washington and Oregon have legalized limited forms of physician-assisted death. Doctors are more sensitive to pain management issues than they were before Dr. Death came on the scene.

Awareness of and financial support for the hospice movement was given a big, if unintentional, boost by Kevorkian, if only because it seemed to many a far better choice than dying in a rusty van.

The problem he forced us to focus on hasn't gone away. Medical science is still prolonging the existence of many for whom life is a living hell. I asked Kevorkian long ago if he thought assisted suicide would ever be fully legal. "Yes, but not for the right reasons.

"You are a baby boomer, right? There are 70 million of you, and far fewer in the next generation. They aren't going to pay two-thirds of their salaries to keep you on machines and tubes."

But he wasn't always wrong.