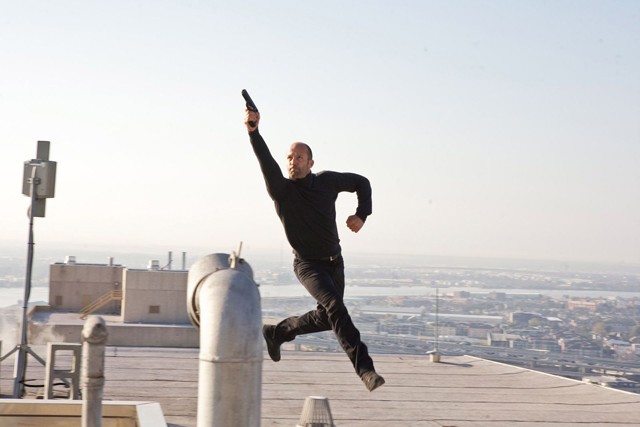 Why so serious? The main thing action flicks featuring Jason Statham (aka "the Stath") have on their side is their sly sense of humor. Between the frenzied fisticuffs and gravity-defying gun duels, there's been an eye-winking cheekiness to lighten the dramatic load. The Transporter and Crank films are gleefully kinetic popcorn movies without pretension or melodrama, always delivering enough kickass to justify modest budgets.

For its first hour, this update from director Simon West (Con Air) of Charles Bronson's 1972 The Mechanic is a slow-burn thriller that upgrades the catatonically acted and directed original with style and energy. Arthur Bishop (Statham) is a solitary, classical-music-loving contract killer (a "mechanic") who performs hush-hush hits with a lot of precision and little fanfare. From Columbian drug lords to a pedophilic religious cult leader, his targets seem all too worthy of the "accidents" that befall them. When his boss (Tony Goldwin) makes him bump off his mentor, Harry McKenna (Donald Sutherland classing things up), for betraying the firm, Bishop experiences a new emotion: guilt. This inspires him to take on McKenna's ne'er-do-well son, Steve (Ben Foster), as his apprentice. While the volatile newbie hit man has moxie and skills, his instinct for mayhem doesn't sync with Bishop's minimalist approach. Of course, it's only a matter of time before Steve realizes who offed his dear old dad.

Brisk, dramatically perfunctory and, at times ultra-violent, The Mechanic dutifully follows through with its assassin-gets-a-conscience storyline with muscular proficiency. Statham's bullet-headed stoic brutality is a good match for bratty Ben Foster's fierce intensity, lending the film's middle a cool kind of camaraderie. Foster's initiation hit on a 300-pound fellow assassin is especially effective as it degenerates into a mano a mano brawl that pits tactical cunning against sheer brute force.

But instead of playing up the movie's modern grindhouse sensibilities, West gives every scene in The Mechanic a deadpan seriousness, turning even the most energetic action scenes into something grim and humorless. It's an odd choice, especially given the final act's dive into the absurd. Instead of capitalizing on the silent-but-deadly thrills of a calculating assassin stalking his prey, The Mechanic fills its finale with bombastic pyrotechnics, letting the stunt coordinators abandon all character logic, trading stealth for wouldn't-it-be-cool-to-drive-a-car-through-a-bus-while-blowing-up-downtown-Chicago badassery. So much for Bishop's under-the-radar skills.

This detour into big-budget blow-ups also undermines the eventual confrontation between Statham and his revenge-minded sidekick. What should've developed into a satisfying showdown gets dramatically and emotionally short-changed, wrapped up with a few hastily executed plot turns.

As an addition to the Stath's B-movie canon, The Mechanic certainly betters its predecessor by servicing its action like an insensitive lover — hard, rough and fast. But its one-night-stand approach to the genre probably won't attract the loyalty Luc Besson's seductively Euro-trashy Transporter flicks have earned over the years. Ah, the French.