Alt-country band the Michigan Rattlers are ready to strike

Backstage at classic rocker Bob Seger and the Silver Bullet Band's penultimate show last month at DTE Energy Music Theatre — or its old name, "Pine Knob," as it is still stubbornly referred to by Seger's fans — opening act the Michigan Rattlers has time to kill. Soundcheck isn't for a few hours, so there's not much to do but shoot the shit and binge on La Croix from the green room's fridge, the promoters having apparently ignored the band's typical request for a case of beer and a bottle of whiskey.

The young alt-country band — made up of singer and guitarist Graham Young, bassist Adam Reed, keyboard player Christian Wilder, and drummer Tony Audia, all in their 20s — aren't going to complain.

"As far as green rooms go, this is definitely on the bigger, cleaner, and nicer end of the spectrum," Reed says as he offers a La Croix.

"It's a different kind of burn than like a pop or a beer. It's very crisp," he says. "This, you can sip it, you can slam it, you can shotgun it. It's a low-calorie alcohol alternative."

Pig & Whiskey returns to Ferndale for a weekend full of barbecue, booze, and music
Staff Pick
By Jerilyn Jordan
Table and Bar

As time ticks by, the guys have no problem coming up with different ways of amusing themselves. At one point, it is revealed that every member of the band can juggle, and they impressively prove it by using the green room's Keurig cups. Perched on the couch, Reed sketches the scene in a notebook, alongside doodles of ideas for logos for the band and merch ideas. Eventually, Reed pulls out a small oil painting he made of Seger and his dog Boris, based on a photo of Seger from the '70s. The band members all autographed the back, and intend to present it to Seger as a thank you for handpicking them to open the final two dates of his tour.

The magnitude of the significance of the gig is not lost on anyone in the band. The 74-year-old Seger performed at the venue more than two dozen times since 1972, setting a record for the longest string of consecutive shows by one act with eight-sold out performances in 1977. (It was eventually broken by another Michigan rocker, Kid Rock, in 2015.) Just a day earlier, the venue dubbed the stretch of road at its entrance 33 Bob Seger Drive. Seger's career is inextricably tied to the venue — and for many people who grew up here, Seger is inextricably part of the culture of Michigan. Later in the night, tour manager Matt Harris marvels at how many young people he sees in the audience. Seger's final six-run string of shows at the venue all sold out, such was the appeal of seeing the rock star who has soundtracked plenty of up north lakeside getaways on his home turf in an outdoor amphitheater during Michigan's mercilessly short summer season.

The booking was a longshot. Young saw that Seger had announced a string of Detroit area dates on his farewell tour, but no opening acts were listed. Tour manager Harris sent a copy of the band's 2018 debut LP, Evergreen, to Seger's people with a request to check out "a young rock 'n' roll band from Michigan." A month before, Harris relayed the good news to the band in a group text with the message, "Seger dates coming in." Within 15 seconds the band members all responded: "Are you serious?" "Holy shit." "Are you kidding?"

According to an anecdote later relayed backstage by Harris, as time went by, Seger's people pressured him to pick an opening act, and he said, "How about that Rattlers band? I liked those guys."

The band likens the experience to winning a lottery ticket.

"It was just one of those things where I don't think any of us thought it would actually happen," Reed says. "You put out the feelers for those things, but you don't ever really think they're going to happen."

"We all grew up listening to him," Young says. "Seger's one of those dudes that you can't really avoid, especially growing up in Michigan." The band says if they weren't opening the show, they would be watching it, drunk on the cheap lawn seats.

Hailing from the northern Michigan tourist town of Petoskey, the band members say they grew up with plenty of classic rock thanks to rock station "The Bear." As childhood friends, the band learned to play their instruments together, and played in their school's band program. Eventually, they formed a rock band, and cut their teeth performing cover sets at tourist bars. 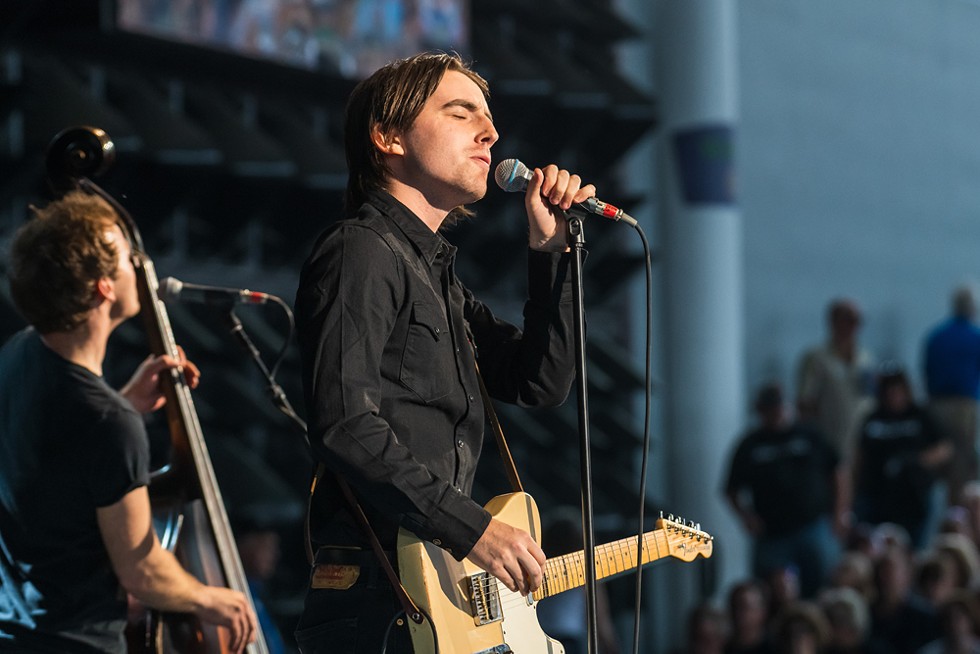 After high school, Young left for Chicago for a few years, where he performed as part of a band called the Wild Family. Young later relocated to Los Angeles, and eventually convinced the other three members of the band to join him there.

The band recorded its debut full-length, Evergreen, during a two-week period last year with Chicago engineer John Karkazis, aka Johnny K. While Karkazis's résumé trends toward more metal and alt-rock bands like Disturbed, 3 Doors Down, and Drowning Pool, he helps give the band a big, stadium-ready polished sound on Evergreen that would be perfect for country radio if country radio hadn't long ago sold its soul. It's no wonder Seger could imagine the band onstage at the old Pine Knob.

In a review, Glide magazine called the record's title track to "a reflective song that is clearly reminiscent of an old Bob Seger deep track ballad and the folk indie sincerity of Will Oldham."

As far as the band name, Young and Reed came up with it during a long drive from Michigan to L.A. "Graham and I decided we had to have a name by the time we got there, because we had a gig," Reed says. The name was chosen because venomous rattlesnakes are indeed a rare sight in Michigan, but also because they liked band names that sound like sports teams names, "like George Thorogood and the Delaware Destroyers," Reed says.

"When we did that name, my dad hated it," Young says. "But now he's like, it was a brilliant idea because anywhere we go, Michigan people come out, even if they've never heard of us."

Like the garage rock band the Detroit Cobras, the name worked — in part, because Michigan's top export is its people, and Michiganders tend to flock to other Michiganders.

“When we did that name, my dad hated it. But now he’s like, it was a brilliant idea because anywhere we go, Michigan people come out, even if they’ve never heard of us.” tweet this

"I remember one time we were in like, Houston, and this guy came up and bought merch and stuff after the show, and he was literally only in town for 12 hours on a layover," Reed says. "He was like, 'I saw you guys are from Michigan, so I came to see the show. You guys are awesome.'" That's also how the band met manager Harris in L.A., who is originally from Kalamazoo.

These days, Young lives in L.A. with his girlfriend, while the rest of the band lives in a house together in Royal Oak. The distance has been no impediment to the Michigan Rattlers' touring schedule, with the band on the road for the better part of the last two years, playing more than 100 shows last year.

As the band gets ready for showtime, Young switches clothes to an all-black, buttoned-up look. It's not a reference to outlaw rocker Johnny Cash, but rather Bruce Springstreen — Tunnel of Love-era Springsteen, to be specific. "I'm a crazy Bruce Springsteen fan," Young deadpans. "I might be considered a Bruce Springsteen historian."

Finally, it's showtime, and the band walks onstage to play its biggest show of its career — though judging by the band's readiness and eagerness, there's likely to be plenty more where that came from.