The number of marijuana jobs in Michigan doubled in 2020, according to Leafly

The number of marijuana jobs in Michigan doubled in 2020, according to the Leafly Jobs Report 2021. As of January Leafly, a leading cannabis information site, says that there are 18,078 full-time equivalent jobs in the Michigan cannabis industry. The group also boldly claims that there are more cannabis workers than cops in the state.

That's an interesting comparison given that cops were — and still are — among the strongest anti-marijuana activists on the scene. There have always been more marijuana users than law enforcement officers, but to see the number of workers rivaling the number of cops is a good indicator that marijuana normalization is marching forward.

The folks at Leafly derive these numbers from surveying state regulatory agencies, employee license data, and facilities surveys with help from Whitney economics. Since marijuana is still federally illegal, the government does not collect data regarding marijuana employment. According to FBI information published by MLive, there are 17,000 full time uniformed law enforcement officers in Michigan.

Nationally, Leafly reports 321,000 full-time marijuana jobs, and that the industry has enjoyed 27.5 percent job growth each year since 2017. And there is lots of money working its was through the system, with $18.1 billion in legal marijuana product sales in 2020. Michigan's total was reported at just under $1 billion in sales — probably a pittance of the real potential. According o the Atheneum Collective, a digital advertising and data business, 87 percent of all marijuana sales are still in the illegal market. 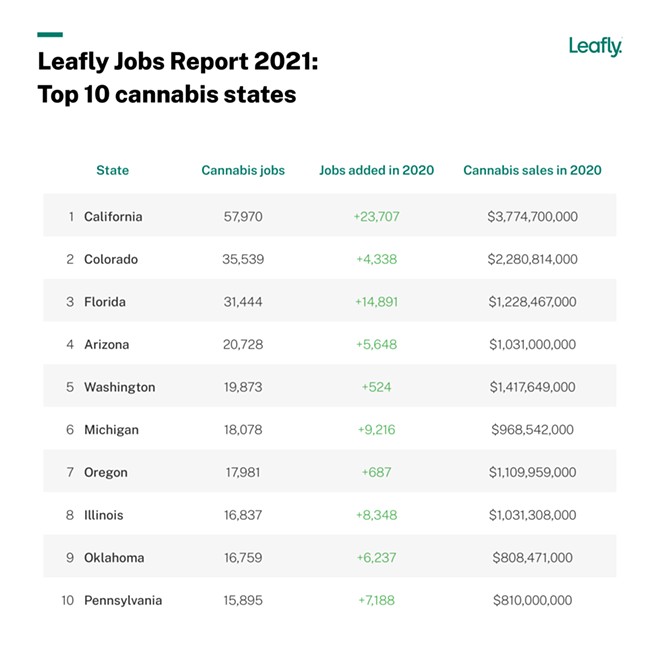 Consider that all of this took place during the COVID-19 pandemic, when much of the economy was either shut down or sputtering along. Maybe COVID-19 played into marijuana sales growth with people spending more time away from the office — they spent 33 percent more per order across the country.

Amid all this happy talk about job and revenue growth, there was one concern that ails the entire nation. Leafly reported that "Troubling racial and gender disparities remain amidst the explosive job growth in the cannabis industry." The report shows that only 1.2 percent to 1.7 percent of all cannabis companies are Black-owned.

The report's analysis of the situation is spot on, including how federal policies restrict access to capital in the banking system. It also highlights a couple of recent positive developments. One is that entertainment mogul Jay-Z launched a cannabis brand and an investment venture to back Black and minority-owned cannabis businesses. Jay-Z started it with $10 million for social equity fund backing. Another of the positive moves cited is Eaze, which puts $50,000 and resources into the hands of minority and female cannabis businesses through its Momentum Accelerator program. This year's 10 grantees included Detroit's Tre Hobbs and his Neighborhood Essentials microbusiness.

We'll see where the progress is on that issue in next year's report. Maybe busting into that 87 percent illegal market sales is a growth opportunity for some innovators. Overall, it looks like the cannabis industry really is an industry to take note of.

See related PDF Leafly-JobsReport-2021-FINAL.pdf
It's a new era for marijuana in Michigan. Sign up for our weekly weed newsletter, delivered every Tuesday at 4:20 p.m.