How one man turned himself into Santa 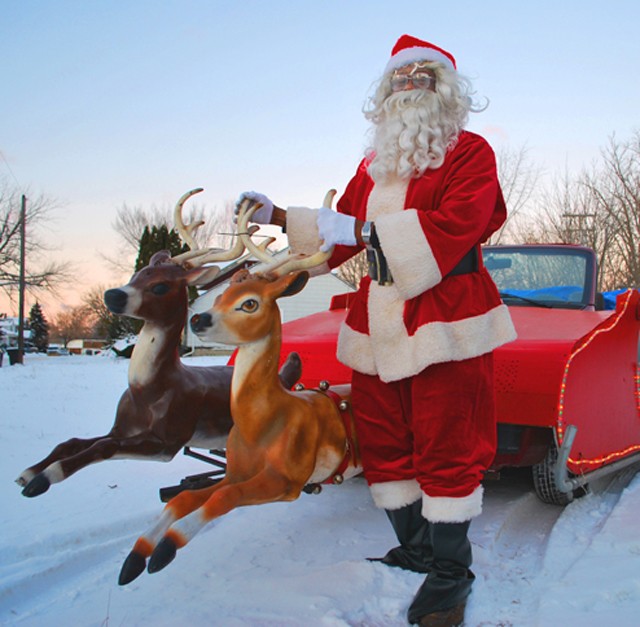 It turns out that there really is a Santa Claus.

Did you know, though, that he lives not at the North Pole but in the Nortown neighborhood on the city's east side? Not only that, his sled isn't pulled by reindeer power but rather by horsepower and Detroit steel. And contrary to what the movies and the Christmas cards show, Santa is black.

"The youngsters make comments about that," says Santa, who during the rest of the year hides his true identity under the name Myron Benford. "You know that song by James Brown, 'Santa Claus Go Straight to the Ghetto'? They say, 'Finally! Now we see a brother Santa!' But I stay away from the color scene and just say, 'Well, now you've seen Santa in living color.'"

The 66-year-old Benford, a retired Wayne County Road Commission employee, has for 42 years brought Santa alive for Detroiters. It began when he got the familiar red-and-white, soft-and-fuzzy costume, which he'd wear while volunteering during the holidays. First it was with the Goodfellows, who'd give him the names and addresses of needy children, then, later, he did it on his own at hospitals, schools, housing projects and youth homes, where he'd give less-fortunate kids a chance to talk to the season's icon in the flesh.

The children would get so excited by his visits that he was moved to buy toys at year-end clearance sales with his own money and save them until the next Christmas so he could hand them out when he made his rounds, to really fulfill the role.

Becoming Santa became an obsession. He pored over the songs and fairy tales, studied all the Christmas movies, even learned a few words of a few languages so he could talk to even more kids, just like the Santa in the movie Miracle on 34th Street.

A few years back he took a 1992 Dodge Caravan, shaved off the roof, sheathed the car in red-painted cardboard and turned it into a big sleigh, led by two large Fiberglas reindeer affixed to the front. The car rides low, so when a few inches of snow lie on the ground, it almost looks like the sleigh is floating smoothly along as the reindeer pull it forward. The sight of it stuns people.

Imagine the things going through the mind of a little kid growing up in some housing project in Detroit when this strange, fantastic sled glides up, strung around its edges with garlands of colored tree lights, led forward by two big reindeer, with Santa Claus riding high in the middle. As if that's not enough, he steps out, larger than life, and starts handing out gift-wrapped presents to kids whose names he somehow knows.

"It's just the idea of seeing the fantasy of that sled pull up in front of your house and you get out, give 'em a bag of toys and disappear. It really builds up their feelings. It's just miraculous."

Word spread about this gentle, self-appointed Santa, and he soon found himself in demand around town. Community groups asked him to visit holiday functions so kids could tell him what they want for Christmas. Cities brought him in for story time at their rec centers.

For years he's held court at Midtown's Noel Night at the Detroit Historical Museum. There, after you wind past the Lionel trains and walk along the cobblestone streets in the basement, you'll find Santa, sitting like royalty in a plush red chair with Mrs. Claus, as gleeful kids and curious adults wait for their annual meeting with the man of the hour. Some of the grown-ups even sit on his lap.

"Especially the ones that are looking for a husband," he says, laughing. "They would come and tell me, 'I'm looking for a husband.' And the one lady a couple years ago ... I said, 'I sent you one but you didn't like him because he wasn't tall enough.' And she says, 'How did you know that, Santa?'"

He's got lots of intuitive phrases he uses, especially with the kids, things he's learned after years of hearing people's fondest wishes. "You pick up the vibe of people," he says. "It's not a hard thing to do, and they help you if you just listen to them." It gives him the air of someone who knows exactly how you've been behaving all year.

Over the years, a few people have chipped in to help him buy his presents. Mechanics fix his sleigh-on-wheels for free. CVS and McDonald's give him donations and gift cards. And local organizations like Volunteers of America provide him a list of needy people who could use a cheerful visit from this man who really has become Santa Claus.

"I play it even when I'm not into it," he says. "When people introduce me during the rest of the year they'll say, 'This is Santa.' They know what I do."

All his efforts — studying the Santa lore, gathering the gifts, upgrading the sleigh — come down to a single day of the year.

On Christmas Eve, Benford rises before the sun does, fills his bag with toys and makes his rounds. The sleigh ride begins at Jefferson Avenue, passes through the ghost-town streets of Delray, follows the winding river to stops in Wyandotte and Ecorse, then turns back north and rides as far west as Southfield before slowly making its way back to the east side.

And all along the way he'll hand out hundreds of presents to hundreds of children, who in their wildest dreams never expected something like this. In the poorer neighborhoods he'll give out hats and scarves and gloves too, even such household items as smoke detectors and first aid kits.

"I want to make my kids well all year long," he says." So that's how subliminally I'll reach the people I deal with out here, so they know I'm concerned about them all the time, not just at Christmas."

People who happen to be standing outside as the sleigh passes by stare with jaws dropped. Cars actually come to a stop on the main roads as people pull over to stare at this otherworldly vehicle going by. Some get out and run over to get a picture.

"I don't believe it," one man says, rushing over to the parked sleigh with his cell phone camera. "This is cold-blooded!" It was meant as high praise.

Benford loves the attention, lives to give out presents, doesn't break character, and will always stop so someone can take a photo with him or the sleigh. But he seems happiest those times he's able to foster people's simple belief that there really is someone who goes around being nice and giving things to everyone just because it's Christmas.

"I've had people tell me their kids didn't believe in Santa Claus until they saw me, and now they do," he says, proudly, speaking through the curls of his thick, pull-on beard. "It's just great, man."