The Republicans have showed us who they are. We should believe them. 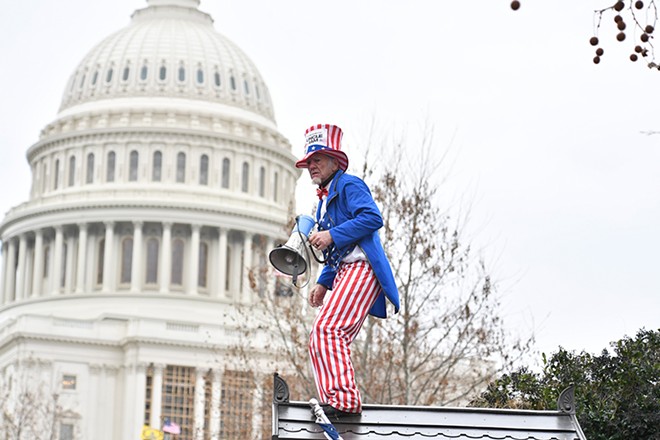 On Wednesday, Chris Cillizza, CNN's purveyor of what conventional wisdom might look like on quaaludes, opined on Speaker Nancy Pelosi's refusal to seat pro-Big Lie Reps. Jim Jordan and Jim Banks on the House Select Committee investigating the Jan. 6 insurrection.

"Her decision to reject Jordan and Banks, the two most high-profile Republicans put forward by [House Minority Leader Kevin] McCarthy, dooms even the possibility of the committee being perceived as bipartisan or its eventual findings being seen as independent," Cillizza wrote.

By Thursday, this take became a narrative.

Politico's Playbook went with the never-heard-of-Benghazi headline "PARTISAN OVERSIGHT HITS A NEW LOW." A Playbook reporter followed up with a tweet calling Pelosi's move "a gift to Kevin McCarthy."

The actual gift to McCarthy is the emphasis on what the thing looks like rather than what it is — the theater, not the substance. By critiquing the theater — analyzing politics in terms of point-scoring rather than truth-telling — journalists can maintain the façade of objectivity, the prime directive of respectable media.

Critiquing the substance would require pointing out that Kevin McCarthy is full of shit.

After the riot, McCarthy blasted Donald Trump for not "denouncing the mob when saw what was unfolding" when he thought the party had turned against the president, then raced down to Mar-a-Lago to prostrate himself before his once and future master when he figured out he was wrong. For the cherry on his humiliation sundae, he then tried to rewrite history, saying Trump had no idea the riot was taking place.

McCarthy was never going to support an investigation. Not when a majority of his party still believes the Big Lie. Not when the Big Liar could end his ambition to be Speaker with a single line at a MAGA rally. Along with the majority of his caucus, he voted against a bicameral, bipartisan commission that gave Republicans equal representation and veto power over subpoenas. The commission ultimately fell victim to a Republican filibuster in the Senate.

Plan B was the select committee. McCarthy wanted it to be a circus, so he sent in the clowns.

Jordan and Banks were intended as chaos agents. Both had voted to overturn the election. Both are election truthers. Jordan — whom former Speaker John Boehner called a "political terrorist" — is a potential witness, since he spoke to Trump the day of the riot and continues to be a confidant. Right after his appointment, Banks announced that he wanted to investigate the Biden administration's response to the Jan. 6 attacks, though the Biden administration didn't exist until Jan. 20.

It would have been malpractice for Pelosi not to boot them.

McCarthy could have replaced them with more reasonable Republicans. Instead, he withdrew all five of his selections and declared the committee a partisan witch hunt. The political theater critics decided he had a point.

Even as theater criticism, this isn't a particularly sharp take. The committee's report was always going to be produced by Democrats and Rep. Liz Cheney, one of the few Republicans bothered by the encroaching threat to democracy. (She's since been joined on the committee by Republican Rep. Adam Kinzinger, who's also lost standing in the GOP for opposing Trump's fraud claims.) McCarthy was always going to call the findings political.

Nothing about that has changed. But now the committee can subpoena what and who it wants without superfluous objections, interrogate witnesses without performative interference, and produce findings without a gaslighting dissent. And it won't have to worry about Jordan and Banks leaking like sieves and spying for Trump.

In other words, the committee won't descend into partisan food fights. Which you would think is a good thing — unless you buy what McCarthy's selling.

What McCarthy understands — and what Senate Minority Leader Mitch McConnell has used to great effect — is that among the Beltway's narrative setters, the only acceptable bias is bipartisanship, so anything viewed as "partisan" will be covered skeptically no matter its merit. If Republicans deny Democrats votes, the story will become a "left-wing agenda" that doesn't "reach across the aisle," not their reflexive obstruction.

They've set an obvious trap, and bothsidesism keeps political journalists walking into it like cattle into an abattoir.

The point isn't that Democrats are above reproach, either in strategy or motivation. Far from it. It's recognizing the uncomfortable reality of our political moment: A major party has become ideologically radicalized and increasingly antidemocratic.

To quote Maya Angelou, "When someone tells you who they are, believe them the first time."

They've shown us who they are — McCarthy, McConnell, every Republican who voted to overturn the election results, who used Trump's conspiratorial ramblings as an excuse to trample voting rights, who downplayed the pandemic or turned the vaccine into another culture-war front, who lavished tax cuts on the rich but now demands austerity for the poor.

As negotiations over a bipartisan infrastructure deal drag on, with Senate Republicans extracting concession after concession; as McConnell threatens to filibuster a debt-ceiling increase, potentially tanking the global economy; as McCarthy sows seeds of illegitimacy before the Jan. 6 committee holds its first hearing, we'd better believe them.