In 1974 George Barry made a movie about a man-eating bed; in 2003, that movie got an official release 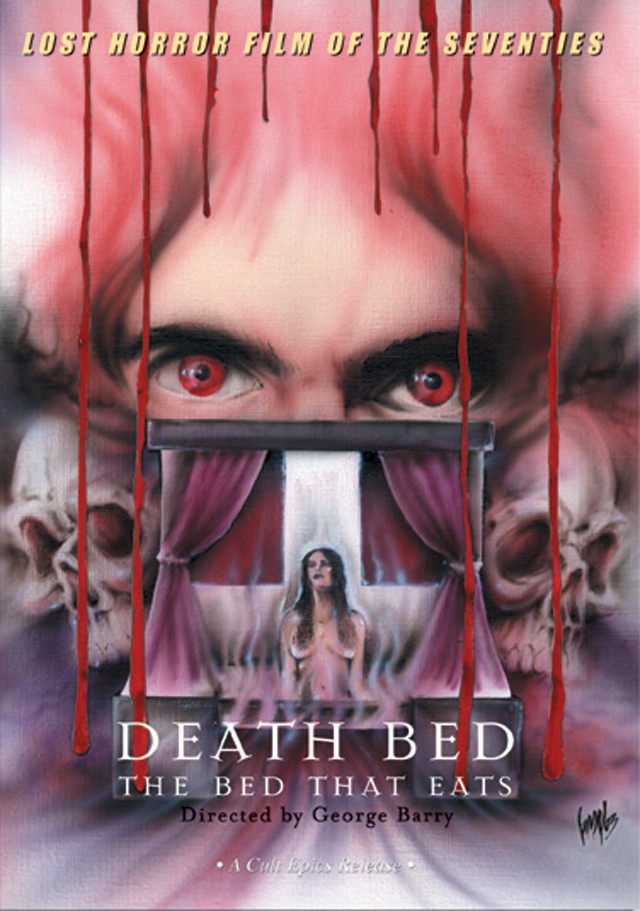 A quick look through the annals of movie history proves that the film industry has generated countless odd, goofy stories. It was (and still is) an art form that draws from the fringes — from silent star Pola Negri to filmmaker Ed Wood to Mr. WTF himself Randy Quaid, and so on.

Mountains of books exist on the subjects of B-movies, grindhouse, exploitation, sexploitation, blaxploitation, and every other 'ploitation, all designed to sate the appetites of those who hunger for something more than the average Hollywood fare. If history — or Roger Corman — has proven anything, it's that any film made on a low budget, regardless of quality, can realistically hope for some level of cult notoriety.

Such is the case with Death Bed: The Bed that Eats.

Royal Oak native George Barry made this campy horror flick on a budget of next-to-nothing in the early '70s, and then spent the next decade trying to sell it with zero success. He soon gave up and instead opened a bookstore in Royal Oak, Barry George Books.

Fast forward a couple of decades. At the start of the new millennium, Barry was online and he discovered that Death Bed had, at some point, been bootlegged, released in Britain and achieved some healthy cult success, albeit on a small scale. A few years later, comedian Patton Oswalt spoke about the movie on a live comedy record (promising to write a film called Rape Stove: The Stove That Rapes). The bizarre result of all of this is that, 30 years after the movie was made, Death Bed: The Bed That Eats was finally given an official DVD release.

Director George Barry still lives in Royal Oak, still has his bookstore, now online, which he manages with the help of his daughter and son, and is immensely proud of his movie, as MT found when meeting with the affable gent in a Royal Oak coffee shop. He's certainly enjoying the attention, finding the whole thing mildly amusing now that he's retired, and considering the movie was made when he was a student.

"I grew up in Royal Oak and I was at Wayne State in the '60s," Barry remembers. "I got an idea that I wanted to make a feature film — jumping from making a two-minute movie to 80 minutes. I scraped 10 grand together, which was a lot of money. But I couldn't afford just to spend 10 grand and not get anything back. The idea had to be that you're going to try to at least break even. I said, 'Let's do a horror film,' but the script that I came up with was more like a fairy tale. Really, it wasn't until I started shooting that I thought that I should make it more like a horror film. Then, it took so long to piece the film together. We shot and got most of the film, and then we did an additional shoot, which might have occurred as late as '74. Now you still have to edit it, do the sound. It was like, there was zero money. I would get a couple of hundred dollars together and do some sound transfer or some editing. The core of the film was edited in a 10-week period. In terms of getting to that stage, it took much longer than I could have imagined. We weren't working on it for five years solid. It was off and on. Months would go by and nothing would happen."

The movie's plot is anything but conventional. Centuries ago, a demon was slain and its blood spilled on a bed. Naturally, said demon now possesses the bed. If people sleep, dream, eat or, of course, have sex on the demonic bed, they'll be pulled inside and, for the most part, digested in its demonic bed-acid. Perhaps surprisingly, the movie isn't just dumb fun. There's charm in its grainy footage and the oh-so-earnest acting (something that Barry admits he demanded from his cast after watching a daytime soap opera!), and the psychedelic dream sequences. The movie is rooted in the '70s, and for those who nostalgically enjoy that era's aesthetics — the magenta and faded reds, the workaday fashions — the film is a lost (and found) gem.

Barry explains that the plot is derived from a dream he had: "I don't even remember if I was the subject of the dream or if I was an observer, but it was just this bed that was engulfing," he says with a grin. "There was nothing that I remember that was specific, but it was the engulfing bed. There wasn't any digestion; it was just the bed coming in, over. I wrote from there."

So imagine Barry's surprise when, a couple of decades after giving up completely on his flick, he discovers that it's something of a cult fave in Europe.

"At some point, somebody made a video master and it ended up at Portland Films in England," Barry says, sipping from his coffee. "I can see why they felt they were in a no-lose situation. I can't say that it was anyone directly involved with Portland. Someone had bootlegged the film and Portland had ended up releasing it. What am I going to do? Go to England and sue them? They can always just say, 'Oops, I'm sorry, I thought we had a deal.' The film did get out; I just wish the person had told me they'd bootlegged it because I might've been able to do something relative to its release. Apparently that bootleg was bootlegged and dubbed into Spanish, but I've never been able to find it. The bootleg and the buzz led to the official release though. The film was initially released in 2003 on DVD and then was rereleased in 2004 simply because Cult Epics, the company putting it out, had changed distributors. They went out through one company, then through Ryko which is a subsidiary of Warner Bros. I think Ryko are the distributors now."

With the movie out and continuing to generate a buzz among B-movie heads — it has even earned Barry a few thousand dollars! — stand-up comic and actor Patton Oswalt, aka Spence from the sit-com The King of Queens, started talking about Death Bed as part of his routine. His whole skit centers around the idea that Oswalt finds it tough to finish any screenplays and yet Barry was able to finish a movie called Death Bed: The Bed That Eats. Oswalt mocks the movie with dry, knowing respect.

What does Barry think of Oswalt's tipping of the hat, so to speak? Eh, not much.

"I haven't heard it but I know the gist. From what I was told, it seemed like he just needed a funny title. He had an idea for a skit, and he needed a comic title or conception. He picked my film, but it could have been any other. I doubt he's ever seen the movie, so it didn't have much of a connection to me. It couldn't have hurt my film to get that attention though."

The 61-year-old Barry is now retired and enjoying time with his children and keeping his bookstore operational, albeit on a small scale, online. After his early foray into moviemaking, he lived a relatively conventional and happily ordinary life — a guy contented in his role as father and business owner. But it's undeniable that the attention his old movie brought him has put a spring in his step, just as he began suffering heart-related health problems and needed it most.

"When I got sick, I don't know where my mind would be if I didn't have some positive things to think about," Barry says. "The most positive thing is my kids, and also the movie, which came out at a great time in that respect. It gave me something else to think about, and that was good. I observed the discovery of the film like a dream. I feel sometimes like I'm not a part of it, like I didn't make it and I just came across it. I'm pleasantly disassociated with it. I'm glad that some people like the movie, and I don't mind if some people laugh and they think it's terrible. That's fine too."

Barry laughs out loud, before concluding, with characteristic modesty, "I can come up with lots of reasons why people wouldn't like Death Bed."