Feeding frenzy: Or the portrait of a Facebook's billionaire asshole as a younger man 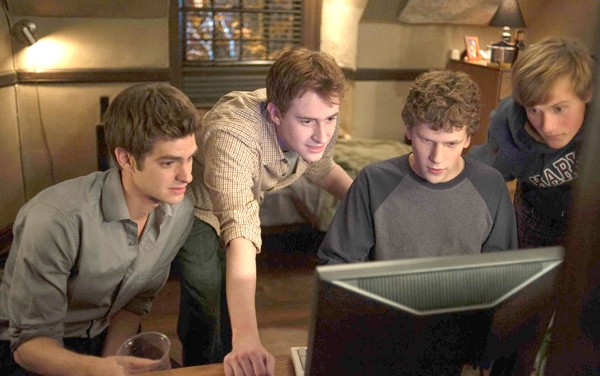 "Listen. You're going to be successful and rich, but you're going to go through life thinking that girls don't like you because you're a geek. And I want you to know, from the bottom of my heart, that that won't be true. It'll be because you're an asshole." —Erica Albright (Rooney Mara) in The Social Network

If there's one thing you can count on Aaron Sorkin to deliver is dialogue filled with sarcastic wit and energy. Take for instance The Social Network 's opening scene, an interweaving of multiple conversations but only two characters — hyperactive Mark Zuckerberg (Jesse Eisenberg) and the girlfriend who is about to break up with him. It's a clever ADD-inspired exchange that sucks you in and sets the stage for David Fincher's speculative depiction of Facebook's invention.

Not quite a biopic (inventor Zuckerberg is but 26 years old) and not quite a character study, the movie is best thought of as the portrait of an asshole as a young man.

Sorkin's script, based on questionable accounts in Ben Mezrich's The Accidental Billionaires, and told mostly in flashback, breathlessly sprints from one exhilarating exchange to another as we witness the freshly dumped Zuckerberg get drunk, disparage his ex in an online journal, then create a website that compares the relative attractiveness of female Harvard students. The stunt crashes the school's servers and gains him the attention of WASP twins Cameron and Tyler Winklevoss (gamely played by Armie Hammer and Josh Pence, respectively), who want him to create a MySpace site for Harvard elites but aren't willing to let him into their exclusive social club. This becomes the seed idea for Facebook, a project Zuckerberg pursues with fanatical zeal, recruiting his best friend Eduardo Saverin (soon-to-be Spider-Man Andrew Garfield) as a financial wellspring and partner.

From there The Social Network heads into Citizen Kane territory, with ex-girlfriend Albright standing in for Rosebud, and Napster inventor Sean Parker (Justin Timberlake) becoming the ruthless devil whispering in Zuckerberg's ear. Cross-cutting between past events and present lawsuits, the film chronicles Facebook's meteoric rise, its creator's betrayal of his friends, and the relentless ambition that made Zuckerberg the youngest billionaire in history.

What's amazing is how Fincher and Sorkin have taken inherently unlikeable characters and made them both fascinating and engaging — even as they undermine, betray and subvert each other. As far as snake pits go, they've made a helluva entertaining one.

Fincher's direction is slick, confident, precise and filled with enormous drive, only occasionally overwhelming Sorkin's verbal pyrotechnics. He paces his movie like a thriller, using Trent Reznor's overwrought score to energize scenes. More importantly, he convincingly captures the process and excitement of invention and innovation. Expertly segmenting and layering the story, he conveys huge amounts of information while maintaining Sorkin's savory drama. It helps, of course, that Fincher is a technical virtuoso, filling the screen with elaborate visual and thematic schemes. For example, the Winklevoss brothers' appearances get tilt-shift camera tricks that cheekily comment on their family's upper-class insularity.

Sorkin's script is equally masterful. His overcaffeinated dialogue has such a theatrically interactive feel to it — weaving multiple conversational and thematic threads together at the same time — that you start to feel like a live participant, encouraging the performers to achieve even more energetic heights.

Uniformly, the cast is excellent, with Eisenberg giving Zuckerberg such a vicious sense of entitlement and self-absorption that it borders on autism. In many ways, the character becomes a living metaphor for the relentlessly interconnected yet emotionally detached Internet age, where narcissism, casual hostility and ambition turn "friends" into transactional merit badges.

But as lively and smart as the film is, The Social Network starts to run out of dramatic gas in its third act, as personal woes dip into sitcom territory (particularly Saverin's fight with a possessive girlfriend and Parker's cocaine meltdown) and the lack of personal context takes its toll. According to Sorkin and Fincher, Mark Zuckerberg is a cipher. We learn nothing of his personal life, his family, his upbringing or even his emotions. If he weren't a real person, you'd swear that he was created solely for the screen, the living embodiment of envy, inspiration and ambition. There are, of course, hints at what makes him tick. Arrogance, petty jealousy and the need for acceptance are all displayed. But these are traits that exist in nearly every 20-year-old. What's missing is nuance and the implication of change. The Social Network presents Zuckerberg as an unmovable force, incapable of self-reflection or personal growth.

Timberlake's paranoid and charmingly sociopathic Parker is similarly sketchy, a snake-like cartoon who is defined by self-aggrandizing paranoia and such cagey lines as: "Revenge is not a dish served cold; it's served immediately and relentlessly." Chewy stuff but hardly revealing.

Ultimately, Sorkin's conceit is both clever and obvious: As Zuckerberg invents his virtual social club, where only friends may become members, he systematically alienates himself from all real-life relationships.

And that is why, despite its shortcomings, The Social Network is a damn fine film. It delivers a high-tech parable about how easily genius and aspiration lead to greed and treachery. It may be a brave new world, but the same old human failings are at its center.