Frenemies for life: Steve Coogan and Rob Brydon drive each other batty 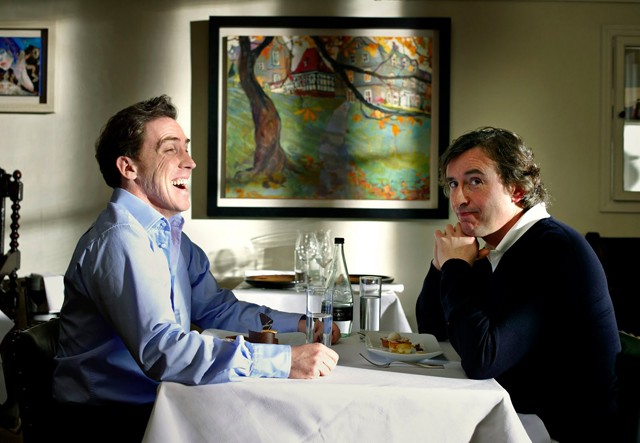 The concept is simple; two aging "frenemies" driving each other nuts on a working vacation to posh restaurants in Northern England, yet in execution this seeming scribble of a movie is as richly complex as the endless bowls of broth served up. There are layers upon layers in this comedic stew, only revealed gradually. Part mockumentary, part travelogue, part indie relationship drama, The Trip is all brilliant, a thoroughly entertaining journey, even as it seems to be rambling along in no particular direction. Adapted from a six-part TV series, and expertly edited by Michael Winterbottom, the feature is almost entirely improvised, yet displays some of the sharpest, funniest dialogue in recent memory.

Steve Coogan, or the version of himself he plays in movies, is a brilliant mess: a shambling mound of bottomless neurosis that can never be sated. He is sort of the British Albert Brooks: endlessly respected among his peers, but only a shadow in the vast public consciousness, a dreadful fact he plays up to terrific comedic effect. American audiences will regrettably know Coogan best from such mainstream fare as Night at the Museum, but at home his persona is much more adult and difficult. Even more obscure on these shores is his comedian pal Rob Brydon, a gifted mimic and genial chat show fixture, equipped with an arsenal of impressions and silly voices.

Basically playing themselves, and essentially reprising their roles in 2006's Tristram Shandy (also directed by Winterbottom), Coogan and Brydon make a cracking comedic duo, their easy chemistry underscored by insecurity and simmering resentment.

One abhors loneliness but dislikes people; the other needs a crowd's applause to survive.

On assignment as a celebrity food critic for The Observer, the morose Coogan is forced to drag along the chipper Brydon, a decision he swiftly regrets as soon as they hit the highway. Steve resents his comrade's geniality, his healthy home life being an affront to the romantically restless Coogan, currently on a "hiatus" from his girlfriend. Hopping from one rustic inn to the next, the gorgeous lake country vistas roll by with only occasional mention, as Brydon is too busy polishing his act, and Coogan is so caught up in his own head he literally can't see the forest for the trees. They eat meals at avant-garde eateries, plates piled with "lamb lollipops" and saffron foams that look more like experiments than dinner. To alleviate their boredom, the comics spend their time obsessively trying to one-up each other.

Their showdown over Michael Caine impressions is a delightful high spot, with the pair dueling over the finer points of his famous cockney accent, and how decades of cigar and brandy have changed his tone. These talented guys understand all nuances of performers like Woody Allen and Al Pacino but seem loath to examine their own quirks or face their own insecurities. Anything it takes to stave off mid-life anxiety and regrets, including a graveyard stop where Coogan insists he'll come to Brydon's funeral "If only to pad the numbers." Maybe they're afraid they'll stop being funny if they think too hard, but they shouldn't worry, as long as they keep it up we can keep laughing until it hurts.