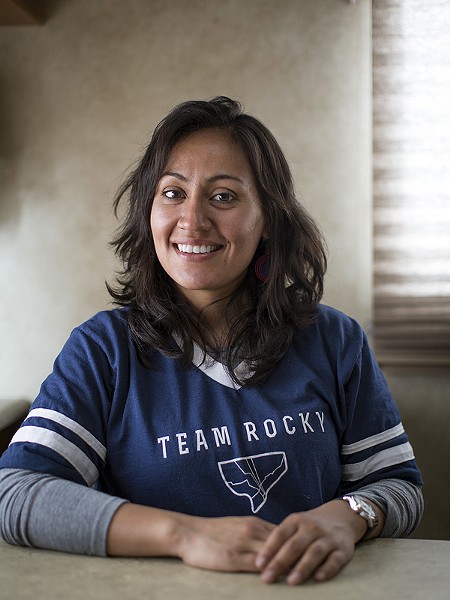 It took a cavalry of supporters to convince Southwest Detroit native Raquel Castañeda-López to run for Detroit City Council.

Worst-case scenario, she thought, was saying “yes” but then failing to receive enough signatures to land on the ballot (she needed 300 in one week). That didn’t turn out to be a problem — supporters came out in droves.

"It was an amazing, humbling experience," she says.

Still, even when she turned in her signatures to the Detroit City Clerk's office, Castañeda-López asked for a form to remove her name off the ballot, just in case.

"I was so afraid," she says, "But the clerk responded, 'Honey, you just need to get over your fear. The community is asking you to do this.'"

It’s a community that’s played a role in her life from the onset. She still resides in the same house she grew up in. She attended University Liggett School — education was “super important for my family” — and a master’s degree in social work followed, along with a litany of impressive entries on her resume, with studies abroad in Argentina, Mexico, and India. She spent six months in Montana for Native American studies, and worked as a preschool teacher for Head Start.

Since taking office, the 33-year-old has stood out as the best type of candidate: a leader committed to being a public servant, not a career politician.

“It’s the highest honor anyone can have to serve others, so I very much see the position as that,” she says.

Castañeda-López is the first person of Latin American heritage to win a seat in the chamber. She has been a major presence in conversations on integral issues to the city, like the new Detroit Red Wings arena, the city’s water shut-off program, and the massive influx of tax foreclosures.

One of the biggest challenges is representing a district that's quite diverse.

"There are just a lot of communities that are on the opposite ends of the spectrum," she says.

And with the spurt of major growth in downtown Detroit, located in District 6, there’s plenty of work she didn’t foresee when she started. “I never did imagine myself involved in so many conversations around development,” she says.

Castañeda-López’s chief concern in that discussion is a proposed community benefits agreement ordinance, which would be the first of its kind in the U.S. The ordinance would require developers to provide specific benefits to a community through a legally binding agreement for projects that are funded by public money. The community could then take legal action if the developer doesn’t hold up its end of the bargain.

“It’s about making sure that we really are raising our level of consciousness around inclusivity. You may bring jobs to the community, but if it’s at the cost to a child’s health, is that really fair?” she says.

“So often, I find myself saying, ‘We need to think about the pedestrian, the people living near the development.’ It’s going to be really difficult for us to repopulate our city if we don’t address quality-of-life issues.”