For Cold Men Young, it's about getting white and black audiences together - and tearing the house down 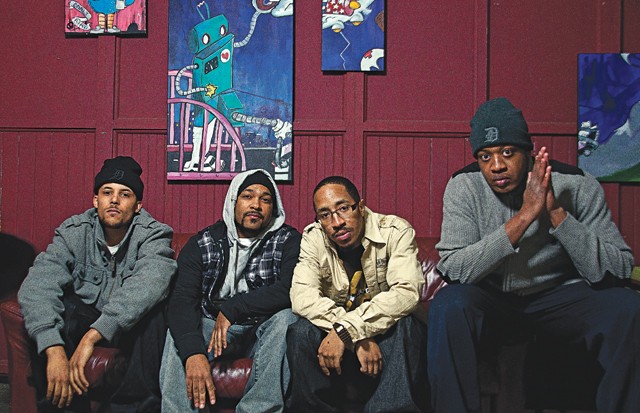 The four young emcees of Cold Men Young are crammed into a dining booth at Woodbridge Pub. Half-empty glasses of Ghettoblaster beer litter the table. It's 9 o'clock on a frigid winter night and the bar is packed and noisy. The guys are tired but jovial; if you didn't know they'd come together as a collective two years ago, you'd think them childhood pals. Inside jokes and jabs color conversations between the Deep Talk, which touches on everything from The Green Hornet to Rick Synder's questionable sense.

Young says, "You know the scene in Anchorman where they have the newsman gang fight in the alley? We were all just in the alley just spitting bars." He stops, laughs, and then he adds, "Nah. Mainly, we saw each out at the poetry spots and the hip-hop spots and we all admired what each other were doing and we started coming together just for fun. The chemistry was so crazy that we knew we had to make it official."

So the Cold Men Young guys took their intense, floorboard-rattling sound up any avenue that'd have them, grass-roots style. "And a lot of people just need a laptop and mic and they have the means to release music," Morris says. "Technology is a mofo nowadays. A lot of people can be self-sufficient without having to go the rigors of the old-school model."

It's true, hip-hop radio is obsolete; it can't touch YouTube in terms of speed and the option to exercise personal choices to discover what's fresh, and all without interference of radio programmers, major label marketing, payoffs, etc. Detroit's latest rap darling Danny Brown proves it.

"To be able to release a single on the Internet with no physical copies pressed up and have it disseminated through the blogs and the Internet has been crucial," Young says.

Buzz rose around Cold Men Young after live shows won them huge word-of-mouth in Detroit. Soon things became serious — after recording in fits and starts over the course of a year, the crew's debut, Champagne Nights, Red Stripe Budget, hit the streets last April. The record featured beats from local up-and-comer producers such as Sheefy McFly and Jay Norm, and was anchored by clever and authoritative verses, serving up personal snapshots of everyday lives.

Because Cold Men Young's music hits on personal levels, it's getting wider attention. There's a connection, and listeners become fans.

"Yeah, I don't have a Maybach, I don't have a mansion," Young says, smiling. "I can't press a button to hit you with a hollow tip." Everyone laughs. "I know I can go home and fix a peanut butter and jelly sandwich." Morris adds, laughing: "That's something everybody knows right there."

Most songs on Champagne Nights, such as "Det Riot," with its unadorned beat and witty rhymes, promote fist-pumping. McFly's beats are lean and stripped, Norm's more crate-digger crafted, funkier. But instead of sounding brain-dead (who can forget D4L's "Laffy Taffy"?), they're catchy and give up space for interesting wordplay.

The band's taste in beats rises from the crew's collective eclectic tastes, all born of their musical backgrounds as kids.

Morris grew up on his aunt's classical music, his mom's old-school R&B, his brother's classic hip hop and even a slice of MTV pop and rock. Young's mother, besides raising him on a diet of soul and R&B, also exposed him to Pharoah Sanders, Alice Coltrane, Charles Mingus and all the best in avant-garde jazz. Stewart and Smith both gravitated toward hip-hop early on.

Champagne Nights is a record that's beyond most hip-hop radio fodder in terms of intelligence and wit. The group says the record just sort of rolled: "It wasn't really a mixtape or an album," Morris says. "It was just a project. That's the best way to explain it. It was so grassroots. We just did it with what we had and everything just fell into place."

Cold Men Young have generated considerable buzz in a short time. "It's been two years," Morris says. Smith chips in: "It's been a blessing. There's been people rocking for a while and in two years we get to put our project out with limited funds and we get a lot of love.

"Year by year, things continue to grow for us. Part of that is our own work ethic, to try to reach higher. Last year, as a group, we had goals like: 'We're going to play the Blowout, we're going to do South by Southwest. We're gonna do all that shit.' And, here we are this year doing it."

CMY are Blowout candidates to bridge some of the cultural gaps in Detroit music — they've been getting equal love from both sides of Eight Mile.

"It's funny," Smith says. "We could go to Rochester Hills and perform in front of nothing but white folks and they will love it. They will know all the words and they will dance uncontrollably. And we can go into the hood and rock some hood crowds too."

The foursome has managed to pique attention with skill and belief; they've sold themselves on honesty. The guys are genuine, man. It's a no-bullshit approach in an age where fake is the new real, where you can be whoever you say you are in social media. There's so much horseshit out there now and you don't have to be who you say you are to get famous, hollow and soulless as it is.

"When you don't even have to see someone in person for them to be relevant, that's crazy," Stuart says. "So, you can have one nice outfit on, your thing on the Internet and people will think: 'Oh, that's fresh.' But really, you could only have that one nice outfit and really you're not even fresh and you can just come up with your persona, one that you don't even have to live up to."

Over the next year the band has tentative plans to release bimonthly singles and a new mixtape. Aside from occasional haters (Morris: "Like, every four months we get a cat that's like: 'Fuck them niggas!'") things seems to be going swimmingly.

Before CMY, the guys were all sort of flying solo and, in some respects, they still are. Morris and Stuart hit the open-mics, and Smith and Young have projects outside of the group. In fact, Young just released a single, "Caught My Eye," produced by the Detroit crew the Olympicks. But Cold Men Young is the focus, like a brotherhood, and they pour all their resources into it.

Another thing worth noting is that when they're all together, there's something that makes you want to know about them. They're impossible to ignore.

"We're part of the Voltron, man," Morris says. "The individual cats kick mad ass. But as Voltron, you can destroy everybody. That's what it all comes down to."