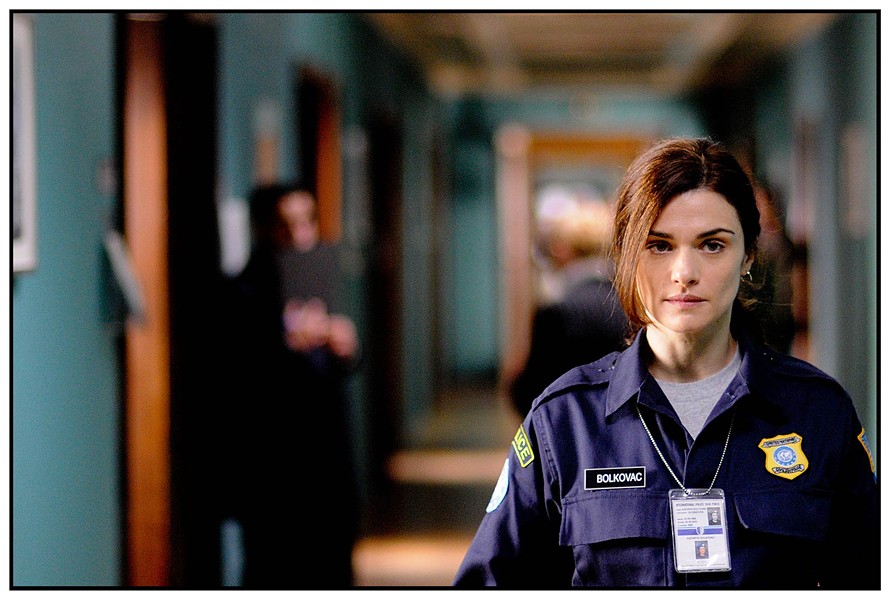 Two years ago, producer-writer Luc Besson scored a big hit with his sex-trade revenge thriller Taken. Liam Neeson played a retired CIA operative out to rescue his daughter from seedy slavers and depraved Arabs. Worldwide the movie earned north of $225 million. Slick, frantic and violent, it took a serious real-world subject and turned it into pop-culture trash. If only its fans cared as much about the U.S. military contractors who help perpetuate these very same practices in real life.

Dyncorp International, a Virginia-based government contractor that does work for the military in Iraq and Afghanistan, has landed nearly $6 billion in taxpayer-funded projects. A Wikileaks report demonstrates that the company was involved in the facilitation of sexual exploitation of children in Afghanistan. This is not a first for the company. In the late 1990s, they were also implicated in the Bosnian sex-trafficking scandal depicted in Larysa Kondracki's tense and unflinching The Whisteblower. I have a sneaking suspicion Kondracki's movie won't earn one-tenth of Taken's box office. After all, many of the bad guys turned out to be Americans, and nobody gets blown up with a rocket launcher.

Rachel Weisz stars as Kathryn Bolkovac, a real-life Nebraska cop who signed up for U.N.-affiliated peacekeeping duties in Sarajevo and uncovered a horrific conspiracy of criminals, law enforcement officials and corporate contractors who kidnapped, tortured and brutally prostituted teenage girls. While the facts have been changed for both dramatic effect and legal cover (Dyncorp is called Democra), the basics of the story mostly stay intact. The crimes and cover-ups did occur, Bolkovac did apply her cop skills to reveal corruption that reached into the upper ranks of the U.S. State Department, corporate interests and the United Nations, and she was, indeed, fired and blackballed for her efforts.

As a throwback to the politically conscious, paranoid thrillers of the 1970s, The Whistleblower does well mixing muckraking social commentary and suspense. Kondracki (who co-scripted) avoids typical missteps of the genre, never letting her film get too didactic, expository or depicting her heroine as infallibly virtuous. Instead, she weaves an earnest and oftentimes harrowing account of Bolkovac's investigations, bureaucratic frustrations, and growing recognition that no one can be trusted. The direction is unadorned and, to be frank, a tad pedestrian, and the plotting gets a bit episodic, but Weisz's standout performance elevates everything around her. Believably balancing her character's unfamiliarity with her foreign surroundings with a dogged sense of mission and, eventually, outraged anguish, the actress deepens what might've otherwise been a cardboard protagonist. Vulnerable but tough, Weisz makes us care almost as much as she does.

The Whistlebower's international cast adds to that authenticity, with David Strathairn, Monica Bellucci and Vanessa Redgrave popping in to play UN functionaries who may or may not have agendas of their own. Romanian actress Roxana Condurache is particularly effective as 15-year-old Raya, a spirited yet tragic sex-trade victim. In fact, Kondracki goes to great lengths to personalize the film's victims, turning them into real people rather than abstracted political props. Still their personalities and suffering come off as more generic than she probably hoped for. Similarly, the film's atrocities are confronted without nuanced understanding, with its villains depicted as unambiguously evil, their faces constantly drawn into cartoonish sneers.

The hard truth is that there'll always be those who put profits before decency, reputation before truth, and exploitation before assistance. The Whistleblower is a persuasive reminder that the real test is how accountable we hold the corporate and political interests who traffic in these monstrous acts. Given the multibillion-dollar contracts that companies like Dyncorp continue to receive (Donald Rumsfeld dismissed criticisms by saying it was the act of employees not the company, and declaring that, "corporations can get off of — out of the penalty box if you will"), our nation is failing that test. Maybe we'd pay better attention if there were a few more kickass explosions.