'The Wild Goose Lake' is a smart Chinese neo-noir 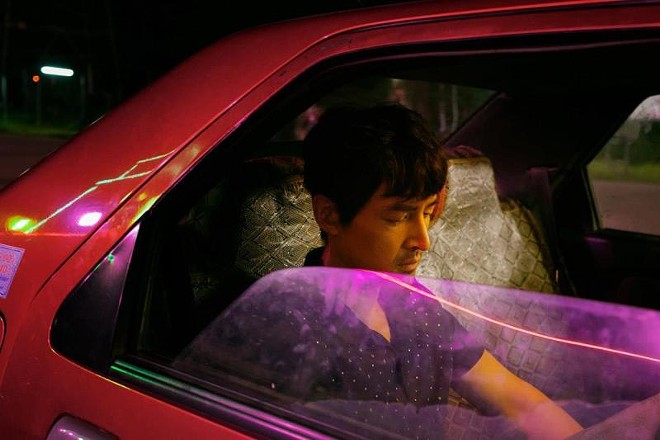 The Wild Goose Lake is currently streaming online as part of Film Lab's Virtual Cinema series on VOD. Tickets can be purchased here.

A kiss is more than a kiss, a gun more than a gun, a quarry more than a quarry: so it often goes in neo-noir, and so it is in 2019's The Wild Goose Lake. Diao Yi'nan's latest film, recently distributed to VOD by Film Movement, is both modern and classical in its mixture of film historical reference, deploying familiar symbols with an expressive knowledge that grants an informed sense of reach. Let's call it a neon-noir, for, like a lot of both crime and science fiction works informed by film history (it owes as much to Akira as to Detour) — and you can count any Blade Runner and many a Michael Mann film among them — its use of shadow depends heavily not just on light but color, literal as much as local.

Women bring in much of it here — magenta (lips, a dress) — and white straw hats floating on calm waters. These hues clash against the artificial greens, yellows, and crumbling concrete that offer up the chief features of Lake's remote, lightly derelict backdrop. Highways, back roads, and cramped urban alleyways make up the spaces bordering the titular lake; described as "a lawless place no-one really controls" in translated subtitles, the notion sounds borderline utopian in light of what we know about surveillance and modern policing in countless modern settings.

The speaker, however, is a cop. Pursuing a professional gangland motorcycle thief named Zhou Zenong (Hu Ge) — who’s accidentally killed another policeman by mistake — the space the two enter proves a sort of no man’s land of conflicting motives, plainclothes agents, hidden traps, and switchblades. In this world — and mainland China, really — it’s easy for viewers to side with Zenong, who faces literal armies of soldiers and police dead-set on enforcing a state-allied image of indomitable control. With Zenong less a character than an archetype, his flight and even his criminal pursuits feel like a blow against an oppressive state; it’s hard to think, in watching, of a modern film in which surveillance cameras figure more easily or casually.. Hovering around Zenong for much of its duration, the film aligns with but never valorizes him — even as it captures his posture, air of assurance, troubled position, and style.

As a place in which a sense of omnipresent control is contested, the film’s battleground is finely chosen. As a work driven by aesthetic stylings as much as its familiar but well-tuned plot, Lake proves both intimate and resonant — though more physically than psychologically, a mode that proves just as effective in the end. The film’s staccato editing rhythms capture screen iconography in an almost pop-art fashion, and about as well as anyone really can. In one early fight scene, a turf war between rival gang factions is micronized into a series of sequenced close-ups. Amid them, in a battle that erupts in mere seconds, tussling male limbs bend to near the point of breakage, blurring the difference between prelude and execution of gruesome violence in a manner that’s more intense than many scenes of overt bloodshed. As the shots flash between each imperiled body on display, the bike thieves’ aggressions scan more as defenses than attacks. In a space in which individual power is constantly contested — whether between warring insurrectionists or from the top authorities on down — even violent assertion becomes a declaration of oneself.

This same logic blankets the film’s twists and bursts of violence; even as Lake’s direction implies a side, its story’s more about the path it takes and its retooling of tropes along the way than any eventual outcome. Like that of almost any crime film, its trajectory is crossed by many an act of violence, and so takes it to a place that can only end so well. The terms of its existence feel justly inevitable, though they're altered enough not to feel too received. Like so many noirs, it’s defined by shadows, cast as much here by lighting as by the looming presence of state and surveillance authorities. Crime may not pay, exactly, but here it’s elevated and comes to signify something anarchistic, individualized: faintly and grittily romantic, floating past the way we might regard it in the everyday. The film’s tensions stem from the impermanent, impressive ways its resonances flicker, the ways its images are captured, and the way, never less than successful, that it makes familiar scenes seem new.