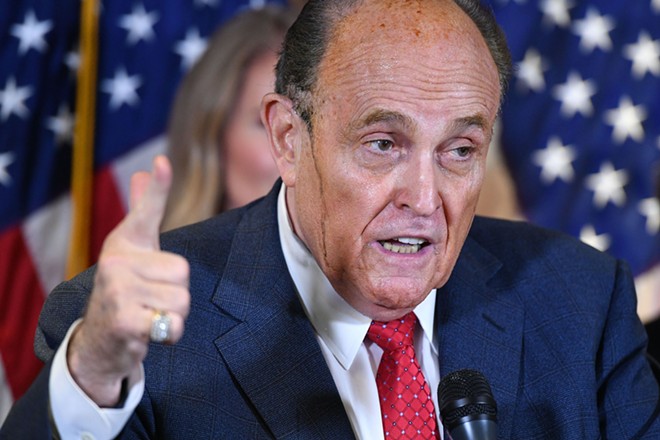 We’re riding up hard on the ass end of this shit year, which can mean only one thing: listicle season — that glorious time when columnists the world ’round pre-write retrospectives for the final weeks of December and spend the holidays on the sofa chugging whiskey.

Since 2020 has been a parade of horribles, I figured it fitting to cap it off with a list of the year’s worst people. OK, technically, the worst Americans, as I’ve excluded the rest of the world. (Apologies to Narendra Modi.) I’ve also ignored the Trumps — Donald, Bloodshot Eyes Don, the Dumb One, Javanka, the Daughter Donald Forgets He Has, Soon-to-Be-Donald’s-Ex, the whole batch — because what’s the point?

I’ve divided our baddies into four groups, as follows:

• Seditionists: the conspiracy theorists, sore losers, and D-league fascists trying to overturn Joe Biden’s victory.
• Authoritarians: those who weakened the rule of law and used violence to quell anti-racist dissent.
• Deniers: people whose ignorance, selfishness, political calculations, or science denial made the COVID-19 pandemic worse than it had to be.
• Cowards, crooks, enablers, and shitheads: Every list needs a catch-all.

So, without further ado, here’s Part 1: Seditionists and Authoritarians.

RUDY GIULIANI. Rudy’s had a tough couple of months: farting out loud in a public hearing, that Four Seasons Total Landscaping press conference, the weird hair dye (or maybe mascara?) incident, trying to get it on with Borat’s pretend-daughter, getting hospitalized for COVID-19, etc. And that’s to say nothing of getting repeatedly humiliated in court, losing lawsuits, and watching his conspiracy theories get debunked. (Honorable mention: Sidney Powell, who filed the quickly dismissed “Kraken” lawsuits, and Mellissa Carone, Giuliani’s viral “star” witness in Michigan.)

SEN. RON JOHNSON. First, the Wisconsin senator used his chairmanship of the homeland security committee to try to retroactively justify the Ukrainian coercion that led to Trump’s impeachment. Now, like so many others, he’s publicly undermining Biden’s legitimacy. Here’s what separates Johnson from the rest: In private, he admits that he knows better. But thinks it would be “political suicide” to oppose Trump — an “asshole” — and that matters more.

U.S. REP. MIKE KELLY. After Trump lost Pennsylvania, Kelly sued, arguing that a law Pennsylvania Republicans passed a year ago to extend mail-in voting was unconstitutional, which meant the state Supreme Court needed to throw out all mail-in ballots and declare Trump the state’s winner. Shockingly, this argument didn’t take.

TEXAS ATTORNEY GENERAL KEN PAXTON. Joined by 18 red-state attorneys general and the 126-member congressional treason caucus, Paxton — who is staring down a federal corruption investigation and could use a pardon — filed what amounts to Trump’s last stand: a petition to the Supreme Court to overturn election results in Wisconsin, Pennsylvania, Michigan, and Georgia. Paxton doesn’t make a legal argument so much as thread together fact errors, debunked conspiracies, constitutional contortions, and an astoundingly stupid mathematical “analysis” into a request that the Court decide Democratic votes are inherently illegitimate. The right-wing Roberts Court wasn’t interested.

CHRIS RUDDY. Ruddy owns Newsmax, an increasingly popular cable outlet dedicated to fulfilling MAGA America’s fantasies. This is an unabashedly Trumpian universe in which election fraud is an unquestionable fact and Fox News — whose audience Newsmax is stealing — is the establishment. The best part: Ruddy probably doesn’t believe any of it. He’s nothing but a cynic proudly profiting off the gullible while undermining what’s left of American democracy. (Honorable mention: Herring Networks, which owns One America News, and the far-right Sinclair Broadcasting).

ATTORNEY GENERAL WILLIAM BARR. Barr’s DOJ dropped charges against Mike Flynn despite his guilty plea. Barr overrode prosecutors on Roger Stone’s sentence. He fearmongered about voting by mail. He opened an investigation into the FBI’s investigation of Russian election interference. His department sought to block Congress from enforcing White House subpoenas. He tried to have the DOJ defend Trump in a lawsuit accusing him of defamation for denying a rape allegation; had the DOJ won, the case would have been dismissed. But his most egregious offense this year: Amid Black Lives Matter protests, Barr personally ordered law enforcement to attack peaceful protesters in Lafayette Square to make way for Trump’s photo-op in front of a church.

DETROIT POLICE CHIEF JAMES CRAIG, NYPD COMMISSIONER DERMOT SHEA: Any of the police chiefs who unleashed their head-stomping cops on BLM protesters would do. But Craig bears special mention because, after protesters sued Detroit when officers collapsed their lungs, fractured their bones, and gave them concussions, his department sued Detroit Will Breathe for “conspiracy.” Shea is list-worthy because his cops planned an assault on protesters in the Black and Latino neighborhood of Mott Haven, which Shea said was “executed nearly flawlessly.”

SEN. TOM COTTON. In June, the Arkansas senator penned a New York Times op-ed — immediately disavowed by almost everyone at the Times — advocating that Trump use the military to quash protests. “Cadres of left-wing radicals like antifa,” he claimed, needed to be crushed by an “overwhelming show of force.” Cotton is a likely 2024 presidential candidate.

DHS “ACTING SECRETARY” CHAD WOLF. For the last year, Wolf has served as acting secretary of the Department of Homeland Security, though a federal judge has ruled he was illegally installed, hampering his efforts to deport Dreamers and block asylum seekers’ access to employment. That didn’t stop him and other DHS officials from allegedly cooking reports on Russian election interference, the border wall, and antifa. Speaking of antifa: In response to Tucker Carlson’s demand that the Trump administration make mass arrests and bring RICO charges, Wolf — who had deployed paramilitary agents in unmarked vans to kidnap protesters — went on Carlson’s program and assured him they were working on it. Barr was “targeting and investigating the heads of” [BLM and antifa] and those “paying for those individuals to move across the country.” That wasn’t a real thing, and the RICO charges never came.