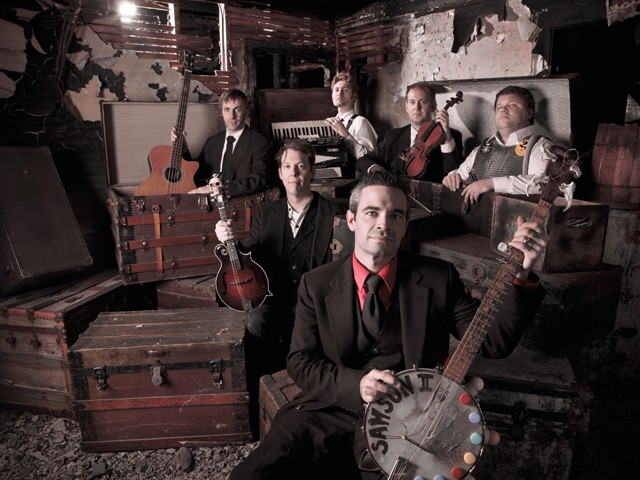 Black Jake & the Carnies singer, Black Jake himself, is explaining the origins of one of his band's songs. "'Cornbread Molly' is about a real chicken, although her name was Henny Penny, which is a really lame name for a chicken," Jake says. "She was the only chicken that the dogs didn't eat. She wandered around everywhere and the dogs didn't mess with her. She had free rein. It was like she had some secret power."

What's magnificent about the above statement isn't that the Carnies have a song about a chicken. It's not that more than one of the members actually keeps chickens in the back yards of their Ypsilanti homes. It's that Jake was able to tell the story of Henny Penny, the apparently hard-as-nails chicken, and nobody in the group thought that it the least bit odd.

See, Black Jake & the Carnies ain't no ordinary band. They formed five years ago in a very ordinary manner that doesn't merit much space. Friendships were forged, some members joined and left, they rehearsed and played Ypsilanti's Elbow Room a bunch of times, toured a little, released a couple of CDs and, here we are. All you need to know besides that, background-wise, is that the band consists of Black Jake (vocals, banjo), Joe Cooter (yes, Cooter, and he plays bass), Mark "Gus" Wallace (fiddle), Jessie "J.C." Miller (accordion), Zach Pollock (mandolin) and Kingpin Billy LaLonde (drums).

After meeting up at Cooter's house and admiring his chickens, Pollock's yard is the venue for this interview. The mandolin player has his own chicken coop too, which he recently built himself. "We only keep hens," Cooter says. "You don't need any boys to get eggs." It's amazing what you learn when you least expect it.

To avoid waking Pollock's sleeping younguns, we sit at the bottom of the yard on bales of hay and folding chairs. Black Jake (he has a real name, but it's more fun if you don't know it) puffs tobacco through a huge pipe that looks hand-carved and drinks a liquid that looks like vodka, gin or flat Sprite — or moonshine.

That's what Black Jake & the Carnies do to you. You want to call Jake "Black Jake," and you want Black Jake to be drinking moonshine, because that just exaggerates the good ol' boy world in which they live. The six men are not rednecks in the stereotypical dull hill-folk sense; rather, these guys are razor sharp, funny as fuck, and, they all work day jobs. Black Jake is an exterminator by trade, or at least that's what he claims to be. It's tough to tell where the frontman persona ends and the real Jake begins, but the way he says, "fuck you, man," when asked for the punch line to the exterminator line suggests he's telling the truth. Drummer LaLonde disposes of toxic waste and body parts for the University of Michigan hospital, which is also awesome. The other four Carnies have fairly regular professions, and all but Wallace live within a couple of blocks of each other in Ypsilanti (Wallace moved to Detroit for work-related reasons).

That's the Carnies: six hard-working men from Ypsi who wallow in the imagery of old-timey sideshows and carnivals. "When you grow up in a small town, you have hair down your back and everyone's a redneck, you get called a freak a lot," Jake says. "So I get attracted to the outcasts, the freaks, being somebody who's on display."

The music they make follows suit — a rich combination of traditional folk and skiffle, punk rock and 'billy, and — whisper it — bluegrass.

"I hate bluegrass," Wallace says. "I can't stand it. I go to bluegrass shows and it bores the shit out of me. Bluegrass is five virtuosos standing in a line playing as fast as they can. Somebody stops singing and somebody jumps up, wails off a solo, pretending it's not a big deal, then they stand back and everyone's like, 'Oh, that's awesome.' It's boring. There's no soul to it, no depth, no power. I feel like a computer could play most bluegrass. We're about people from the neighborhood sitting together at the end of the day. They're coming from different places and they've got different stuff on their minds, but there's something that comes through the music that's an emotional connection."

"I was trying to aim for bluegrass a little bit, but I didn't have the chops, I couldn't pull it off," Jake says, with typical self-deprecation, before following up with, "The truth is we write some of the worst songs in history, we just don't continue to play them."

Watching the guys interact is a show too. They can finish each other's sentences, mock each other mercilessly, and laugh like pirates do in movies. "The only thing we have in common," Wallace says, "is we all hate the Grateful Dead."

They like sharing road tales though. Like that time they played a prison in Belgium and were looked after by a serial killer got everyone laughing. "He killed three nurses," Miller explains. "But to be honest, he was a really nice guy."

Nothing brings a band together like a crusade though, and the Carnies found theirs when the Ypsilanti city workers refused to grant permits to a festival bearing the name "Ypsitucky," deeming it to be offensive. "People from Ann Arbor call us Ypsitucky when they want to call us stupid," Miller says. "But people from Kentucky are like, what's so offensive about 'tucky'? There are a lot of people that came to the town a long time ago from Kentucky with the auto plants, and way back in the day they were looked down upon by everybody else in town. A lot of the young people have embraced it as a hip label for Ypsilanti, but the old people think it's offensive. So the city put the screws to the festival and said that it couldn't be in the park with that name. They had to cave and now it's called the Michigan Roots Jamboree."

Black Jake is still visibly pissed. "It was an annoying thing," he says. "It was this local thing but it was really contentious. I hate it when somebody's got a good idea, and then some overbearing bastard comes in and ruins it because of their own hang-ups. It got us all riled."

Oh, well. The band got a great song, "The Ypsitucky Rustbelt Revival," out of the whole experience. That's what they do — they're given lemons and they make a tobacco pipe and moonshine. They're passionate, rowdy and a shit-tons of fun. Besides, how many other bands do you know who write songs about their chickens?

Black Jake & The Carnies' Sundry Mayhems album is out now. They play Small's in Hamtramck on July 22. Visit blackjakeandthecarnies.com for more.