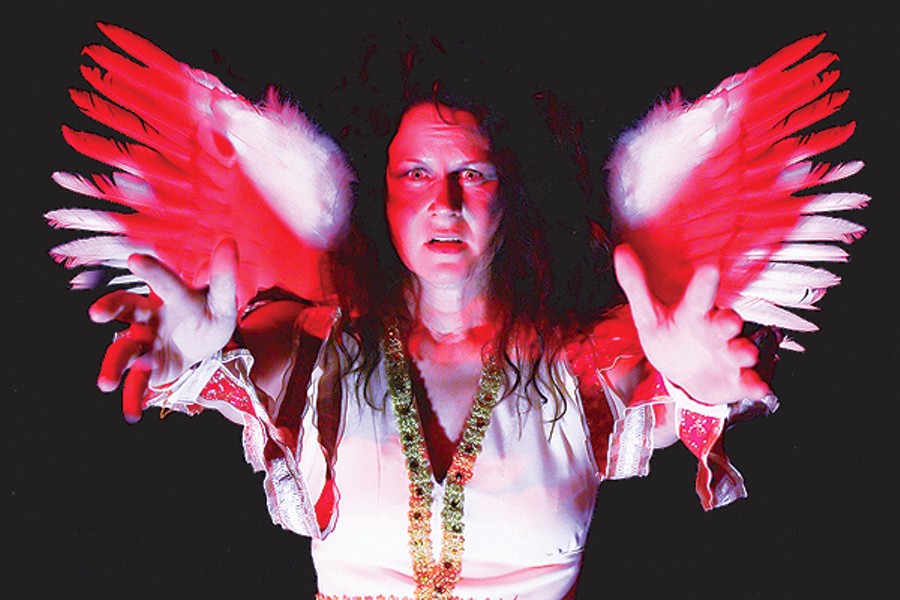 Let's just get this out of the way. In what follows, I'm going to try to convince you to go see the Ringwald Theatre's production of parts one and two of Angels in America. The production is masterful, humane, and most of all, important. In a rare occasion, you have the opportunity to see both parts simultaneously, a full seven-and-a-half hours of theater. If you care at all about great writing, excellent theater, or American culture whatsoever, I suggest you do so.

The play, written in the early '90s by Tony Kushner, is a towering and seminal work of contemporary letters and gay culture. It premiered on Broadway in 1994, and soon after won a Pulitzer Prize and Tony Award for best play. It is an "actors play" and requires excellent performances to create the desired effect. The young and talented cast of the Ringwald delivers over and over again.

The text itself gets rolling right away, with little backstory. Set in Reagan-era New York and written just as the first millennials were opening their eyes to the world, the text is intensely postmodern and kinetic, and predicts the Internet age and short attention spans. Kushner grasps the cadences of modern speech like a ventriloquist without pandering to slang, and, taken as a whole, Angels is one of the best examples of the po-mo fascination with profane of the sacred and the sacred in the profane. Both Kushner and the actors use profanity like snipers.

At seven-and-a-half hours with five intermissions (including one two-hour break for dinner) it somehow manages to feel quick. If you've ever binge-watched a television show, Breaking Bad or Orange Is the New Black, say, you shouldn't have a problem with the long running time. The locomotive structure feels akin to both. You might split the piece up into two days, and the Ringwald is offering separate showings of each section, but the cumulative effect of seeing Kusnher's magnum opus in the course of an afternoon and evening is unsettling and effecting. You'll leave the theater feeling changed and weird.

The cast deals with Kushner's vice-like juxtapositions in style, launching into scenes emotionally and skillfully navigating adjacent scenes where actors play different characters. Kushner is an admirer and student of Bertolt Brecht, the German playwright and theorist who believed the artifice of theater should be apparent and even highlighted. Per the text, actors play dual roles, perhaps suggesting the fluidity of gender, sexuality, and the body.

It's almost impossible to choose standouts in the ensemble cast, as they are all quite brilliant, but when forced, Chris Jakob seems to have been born to play Belize, and Bailey Boudreau handles the difficult queen/patient/prophet transformation with particular grace. Really though, the entire cast is spectacular, and all of the principals have excellent chemistry. It's apparent within the first half hour that this play means something personal to the actors, and they have each risen to the challenge of the effecting text and glacial run time. By my count, each one of the principal actors cried actual tears at least once onstage.

Ostensibly, the plot follows the love lives of two couples, of which three members are gay and at least one has AIDS, but I promise it's not a complete downer. Both Kushner and cast balance the stress and chaos of the AIDS epidemic with humor and pathos, the perfect balance of humanity and comedy. There's much more to the plot than this short review could even begin to relay, but suffice to say elements include angel sex, outer space, hallucinations and fever dreams, heaven, gay cruising, Mormons, fire, the ozone layer, Antarctica, a sweet drawbridge, Jewish mothers, Ethel Rosenberg, and thoroughly fillets the hypocrisy of both modern conservatism and liberalism.

Both the sound and lighting design by Dan Morrison are disciplined and exquisite. The sound is unobtrusive and never gaudy, creating emotion rather than thought, and includes nice touches like a faint, almost imperceptible diesel engine in a park scene. Lighting is the same, understated until it is arresting. The lights dim but never quite extinguish during set changes, relaying Brecht, but also playing as a subtle nod to the memory of those dying of AIDS. Alexander Carr's monochrome, battleship-colored set resembles a prison or castle, taking the New York streetscape to its logical Reagatopian conclusion and surprises when necessary. All get out of the way and let the actors do their work, punctuating and supporting when needed.

My only qualm with the production is that, occasionally, tattoos distract from characterization and pull viewers from the world that the cast and crew have so masterfully created. Tattooing is strongly discouraged in Mormonism and highly unlikely in old-school Jews, and they could benefit from some airbrushing. It's only a minor annoyance, and the spell the production has cast eventually overcomes it.

The production includes nudity, none of it gratuitous, and realistic depictions of sexual acts, essential to the plot and Kushner's attempt to normalize gay culture and destigmatize AIDS. It's likely not appropriate for young children, but because of its historical importance and contribution to American art, it's suitable for teenagers with adult guidance.

Not many people write like this any longer, and few companies are able to stage something with this verve and nobility. Kushner and the Ringwald have committed the great American novel to stage, a symphony of ideas, pathos, and emotion. They offer the rare opportunity to see both parts of this essential play at once. I unequivocally and without reservation recommend you do.

Angels in America (parts one and two performed separately), runs on Fridays, Saturdays, Sundays, and Mondays through Sept. 29. Both parts one and two can be seen in one sitting at a final show on Saturday, Sept. 27. A full schedule can be found at theringwald.com. — mt

Stage Angels in America The Ringwald