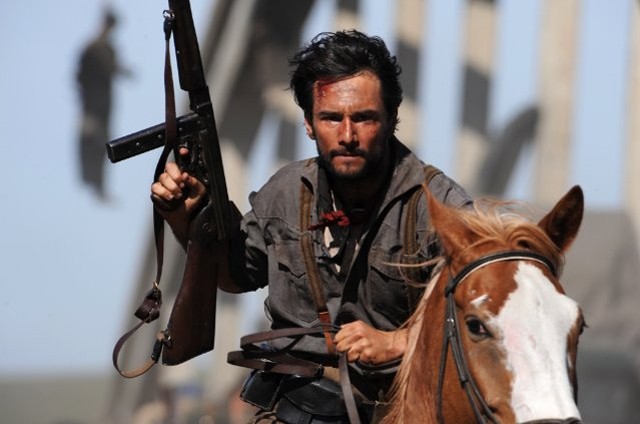 How director Roland Joffe devolved from producing provocatively humanist films — such as The Mission and The Killing Fields — to 2007's ham-fisted and awful torture-thriller Captivity is as confounding as Katherine Hiegl's continued popularity. It's a slow trajectory toward failure that makes you ruminate on the fickle nature of artistic inspiration.

Superficially, There Be Dragons, seems to suggest a return to form for Joffe, a stab at the epic period films that used to dominate Oscar Award ceremonies. With its Spanish Civil War setting and tale of virtue amid violence, the film has all the trappings of an ambitious historical melodrama. Unfortunately, it's a stilted and pretentious bore. Overcomplicating its tale with three different narratives and whitewashing the origins of the controversial Opus Dei movement, this lesson in unabashed embellishment will fail to excite any but the most starry-eyed Catholic. Of course, it doesn't help that the film was funded by Opus Dei members.

When a Spanish journalist (Dougray Scott) receives the dying confessions of his estranged father, he's spurred into investigating the canonization of real-life Catholic priest Josemar�a Escrivá (Charlie Cox). Former friends and seminary classmates, the writer's dad and the celebrated priest had a complicated relationship, impacted by the horrors of the Spanish Civil War. On the one side there was humble, charismatic, and saintly Escrivá, the founder of Opus Dei. On the other side was fiery and fictional Manolo Torres (Wes Bentley), Scott's pop, who became a murderous communist guerrilla. Via decades-spanning flashbacks, we follow both men as love, religion and betrayal reverberate through their lives ... and Joffe struggles to make the case that he's telling a transcendent tale of war and forgiveness.

It's a lot to swallow for what is essentially the story of Spanish fascists. Conveniently, Escrivá's favored status with right wing dictators (Franco, for one), virulent anti-communism and even affection for Adolf Hitler, have all been disappeared from his big screen biography. So, too, with the Vatican's fast-tracked canonization of Escrivá, which ignored allegations about his personal life and the take-no-prisoner tactics of the secretive sect he formed.

This side-stepping of history aside, There Be Dragons' cinematic merits are equally malformed. Cox is lethally bland and Bentley acts with all the Spanish authenticity of Mandy Patinkin's Inigo Montoya. Aside for a few spirited battles scenes and cinematographer Gabriel Beristain's sweeping shots of Argentinean landscapes, Joffe's film is torpedoed by its muddled drama, trite dialogue and lumbering pace.

"Not everyone has a taste for the divine," Derek Jacobi says to Manolo, assuming that the young seminarian's failure to understand "what he can't experience" is innate. There Be Dragons' explanation for why some men rise into sainthood while others fall into selfish criminality seems to be, simply, that some are chosen and others are not. While this might appeal to those who are certain they are among the righteous, it is as unsatisfying a treatment of religion as it is of a drama.