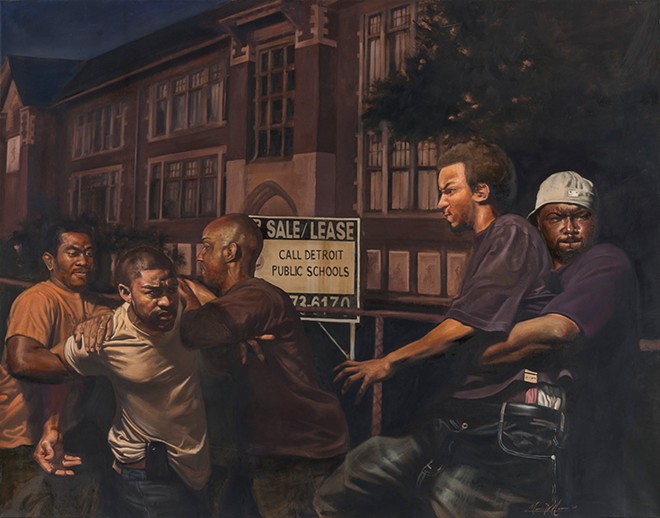 When you approach Enshrined: Presence + Preservation, Detroit artist Mario Moore's survey exhibition now on view at the Charles H. Wright Museum of African American History, the first thing you see is a 2010 painting depicting a group of men breaking up a fight; in the background is a shuttered Detroit school.

"That was considering public education in Detroit, and thinking about its effects on community violence, but also thinking about the opposite side of that and what the media doesn't show — a sense of love," Moore tells Metro Times. "What happened was I was at my grandma's house and these guys were getting ready to fight, and their friends broke it up and then you saw them talk about it. It was just this moment that's not really talked about or considered, it's always just violence and what's wrong."

Moore has gained notoriety for his large-scale realistic paintings, which often depict scenes from the Black experience. "Like most artists, I'm painting what's around me and kind of my story and where I come from, and I just happen to deal with a lot of Black people," he says. "So that's a big part of my work, just considering the people around me, and what their stories are, and what is life in America like for these people?"

Moore attended elementary and middle school at Malcolm X Academy in Detroit and Cass Technical High School. He studied painting as an undergrad at the College for Creative Studies and as a graduate student at Yale. He returned to Detroit about a year ago.

Moore says he's drawn to realism because it can blur the lines between art and the real world. "It's more so about how do you get a person to almost alter their perception, or how do you bring somebody into a world?" he says. "And I think that's why realism is so important, because the figures within the piece can exit the piece, and also the viewer that's standing in front of the painting can feel a part of that world, that they can be brought into something that might move them."

He says he's influenced by artists like the Detroit painter Richard Lewis — "he's actually the one who taught me oil painting," Moore says — along with Kerry James Marshall, and old masters like Velázquez. "I think there's a painterly aspect to it," he says of his style. "I'm interested in texture. When you get up on the painting, you can see that, you know, paint is actually present. I'm not trying to hide those, you know, the moves of the hand."

Moore says he was approached by the Charles H. Wright Museum to do a survey, but agreed on the condition that he could pick his curator. For that, he linked up with Taylor Renee Aldridge, who he went to Cass tech with but later reconnected with in Connecticut.

"She picked the work, she picked the focus of the show, and kind of put in these dramatic points," Moore says. "She also brought in some authors for the catalog. The catalog is dope."

The show opened to the public on June 3. After it closes on Sept. 19, it will hit the road and open in Los Angeles next year.

"This is a chance to kind of really explore the Charles H. Wright museum," he says. "You know, I think that's another reason that we ended up deciding to do it. People need to come to this museum more."

He adds, "The good thing about the show is something different, and it's also something familiar for Detroit. The people in Detroit and in Michigan should experience it before it heads off."