These are some of metro Detroit’s hottest restaurants in 2019 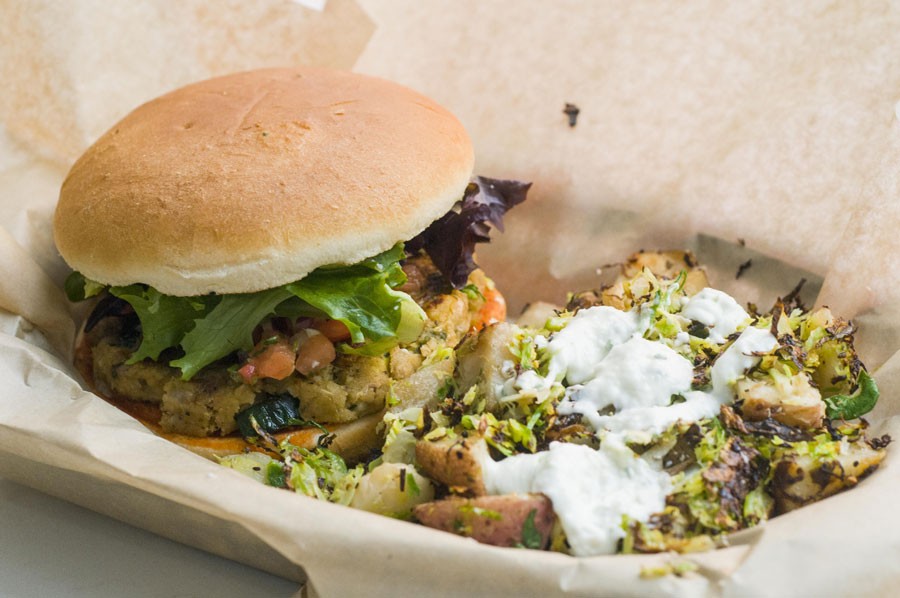 After 30 years in fast food, moving from dishwasher to chef to manager, Christopher Oliver was inspired to open his own restaurant — a vegan one. Oliver offers six burgers and four renditions of Beyond Sausage. "Burger" is defined as anything served in a burger bun. They're all tasty and squishy, a challenge to eat neatly. The spicy Southwestern burger includes a patty of chickpeas and zucchini, plus salsa, guacamole, and jalapeños. Mushroom Swiss loads vegan cheese and vegan mayo onto black beans and portobello. The Sweet Italian Beyond Sausage is traditional, served with grilled red peppers and onions and Italian dressing.

At Gran Castor, owners Curt Catallo and Ann Stevenson have expanded on the "Latin food that speaks with an Asian accent" offered at their Honcho in Clarkston, creating a menu that, if not recognizable in any particular Latin American country, is alive with oversized, crowd-pleasing flavors. Chef Cameron Berg uses lots of Mexican ingredients — queso fresco, tomatillos, black beans, and even masa croutons; red cabbage, avocado, and sweet potatoes also make frequent appearances. He combines them and more wide-ranging elements in tacos, pizzas, salads, fabulous-looking soups, a wide range of appetizers, a few entrées, and a good dessert list — and even classics are sure to be reconceived with a twist.

Finally, vegans can experience all that Detroit coney joy without harming animals. Lines sometime wind out the door as customers wait to get a hold of the faux coney dogs, a "Big Mock" burger, a seitan gyro, vegan chili cheese fries, a beetball sub, and more. CMO is also notable because co-owner and chef Pete LaCombe uses organic ingredients and non-GMOs, as long as they're available. The best part about eating the vegan coney dogs and chili cheese fries is how you feel after.

What James Beard Award-winning chef Michael Schlow is sending out of the kitchen and across the sushi bar is mostly incredible. He brought in veteran chef Lloyd Roberts, who cut his teeth and built up a resume in high-end restaurants around the world, and together they built what's billed as a "Japanese-inspired" menu focused on fresh fish, though there's plenty of beef, chicken, and some duck, as well as thoughtful vegetarian options to consider. Adachi is set up in the grand Ford-Peabody mansion's ground floor at the intersection of Old Woodward Avenue and Brown Street in downtown Birmingham, and metro Detroit is better off for Adachi's arrival.

What sets SheWolf apart, chef-owner Anthony Lombardo promises, is its use of organic whole wheat milled fresh from the grain each day and then turned into pasta. Perhaps our favorite dish at SheWolf is bistecca ai funghi, a teres major steak with mushrooms sautéed to bring out the epitome of mushroom-ness. SheWolf's Italian wine list is also long and impressive, with 11 Champagnes and eight Italian bubblies by the bottle. At the end of the meal one night, we were given a bag of house-milled whole wheat pancake mix to take home. Though the variety of wheat was unspecified, it did produce a good flapjack.

It's Midtown's only fully Japanese restaurant, which co-owner Kohei Robert opened this summer. What's most notable is Urban Ramen's rich bone broth — a deep, absorbing broth that's complex and slightly creamy, with tiny pools of oil glistening on the surface. It holds bouncy noodles made in house that are slightly firm, cling to the soup, and taste how only fresh noodles can. The best of Robert's three ramen bowls is the traditional tonkotsu, which is carried by the depth of its slightly silky, almond-color broth. There's no booze here, so wash it all down with one of the standard pops or teas.

In April, co-owners Kiki Louya and Rohani Foulkes began translating the success of their organic and locavore-friendly Farmer's Hand grocery store and take-out counter into a breakfast-and-lunch café a couple doors down. "Folk is farm-to-comfort," they say. Folk is not exactly comfort food, though, if that means familiar childhood tropes, usually starchy. It does serve pie, waffles, and a hash plate, even a pot pie, but it gussies up the old favorites and adds modern forms of comfort like avocado toast and a quinoa burger. The focus is on sourcing locally, organically, humanely, and seasonally.

Michigan's only Peruvian restaurant is a family-run operation near Nine Mile Road and Woodward Avenue that's offering a fine introduction to the nation's interesting cuisine. Among Culantro's most popular options are those that are also most popular in Peru, like the pollo a la brasa and aji de gallina. In the former, a whole bird is marinated for 24 hours before it lands in a special coal-fueled stove brought in from Peru. There's also ceviche — good ceviche. Culantro doesn't have a liquor license, but the complex and sangria-like chicha morada with dried purple corn, pineapple, apple, cinnamon, and cloves is an excellent mocktail.

Does Alex Young offer pot-a-feu, housemade boudin blanc, a deep wine list, pappardelle pulled in house, lamb hand-butchered in the kitchen, and Marseille bouillabaisse, for which the complex base takes two days to build? Yes, and that's all presented in a manicured and tasteful restaurant in a commercial district on Ann Arbor's outskirts. If Young's name sounds familiar, it's because he won a 2011 James Beard Award for Best Chef in the Midwest during his Zingerman's Roadhouse stint. He's been cooking French food for 43 years so there's nothing clumsy in his operation, and there's refinement that's hard to achieve at your career's outset.

Owner Fahmi Alfreri created a modern space with clean lines, gray tables, black and white chairs, and glass chandeliers. A side room holds a fireplace. Alfreri exults that "we are nailing it" on the toum (garlic sauce). We agree. It was nailed. Lamb is truly the delight of Remas. Our favorite — and the dish most ordered — is fahsah, in which the meat is boiled within an inch of its life with garlic, onions, and spices, then shredded and brought to the table in a black cast-iron pot so hot it keeps bubbling for quite some time. The slow cooking concentrates the flavors beautifully.

Suburban restaurateurs Norman and Bonnie LePage have put a lot of thought into creating Lumen, a playful place to eat downtown. The building itself, which evokes a Jetsons-esque spaceship, has applied for silver LEED certification for being green. There's a living rooftop, with tables surrounded by plants and flowers, and more than half the 380 seats are outdoors. The LePages have kept prices at half the level of their Big Rock Chophouse in Birmingham, with a mostly American menu that runs the gamut from Brussels sprouts to steak. Hats off to chef Gabby Milton, who has come downtown from the Chophouse.

Lovers Only is a local craft burger restaurant with a menu developed by talented Detroit-based chefs. There's not a miss on the menu of four burgers and four sandwiches. The high-quality beef from Farm Field Table could carry a burger on its own, but each of the menu's options are done up with an interesting selection of fixings. Top billing goes to the Classic Smash, the most straightforward with lettuce, onion, mustard, mayo, and pickles. But an even better option is the Burlington, a burger with a spread of dijonaise on a soft, slightly sweet brioche bun with lettuce, Wisconsin cheddar sauce, twice-cooked onions, and pickled relish.

Why would one city have two restaurants commingling Mexican and Italian cuisine? Perhaps because it's been a winning formula, and also because the owner of both restaurants is Norberto Garita, who in March launched La Noria next door to his El Barzon. La Noria, Garita says, is to experiment with some new dishes — notably pizza — in a more casual atmosphere. The red-checked, wood-fired pizza oven is visible to diners; you can even sit right in front of it on tall stools. The thin pizzas are traditional — margherita, quattro formaggi, pepperoni (the cheapest) — and not. La Noria also offers sangria and 23 affordable cocktails at the marble bar — and one is infused with grasshoppers.

City Bakery is much more than a bakery. The place opened in late January, an offshoot of owner Maury Rubin's flagship store in Manhattan. What shone for us were what the staff called "salads," mostly not greens-based but sometimes healthy enough to sneak into that category. The Bakery also makes its own cassava root chips, which have an unusual vegetable flavor. What the New York store is known for is a pretzel croissant. It's just what it sounds like: soft, flaky, buttery, sweetish croissant on the inside, and salty pretzel flavor on the outside — with sesame seeds, and not at all hard like a soft pretzel is.

Lolo Potluck, the one place in metro Detroit that trades in Egyptian cuisine, is run by Sahar Shehata, an Egyptian immigrant who left the health care industry to follow her heart and open the restaurant. Generally speaking, Egyptian fare doesn't rely heavily on spices — that means it's the herbs and vegetables that do most of the work, and when such dishes are in the right hands, the results are fantastic. The best dish Lolo prepares is its mahshy, a common, colorful Egyptian plate that's similar to grape leaves. You'll want to try the sugar cane drink which is, amazingly, liquified sugar cane. Lolo also makes its own delicious baklava in-house.