Return of the original riot chicks 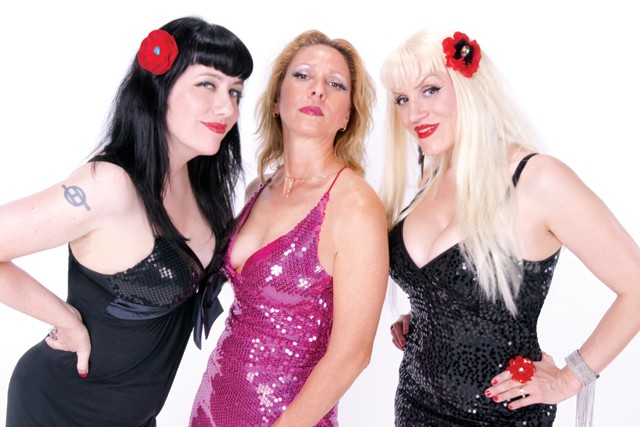 Bassist and vocalist Karen "Queen Bee" Neal is reminiscing about an early Inside Out show. "We peed in Bad Religion's dressing room when we opened for them," she says. "The singer was being a fucking cunt, and so was the bass player. They were dicks from the get-go. I offered him my water, he guzzled it, didn't say thank you, then said, 'There better be empty seats when Bad Religion gets off stage.' So Linda and I pissed all over every plastic chair in the room. We watched them walk in then walk right back out."

The all-girl punk trio is playing a reunion show at Small's on Saturday, the group's first show in almost 20 years, and opening bands the Ruiners and Betty Cooper should take note — do not rudely guzzle their drinks unless you want the Bad Religion treatment.

Sitting with the girls at Neal's Oak Park pad, the bassist plus guitarist Lynda Mandolyn giggle like schoolkids as they recall one zany adventure after another from their time together, from 1985 to 1995. Drummer Cathy Carrell looks mildly embarrassed by the tales of debauchery, though she admits that she had her moments. Like the time at the long-gone punk club Todd's.

"Opening for the Jesus Lizard, I had a fight," Carrell says, kind of sheepishly. "Some redneck guy at the end of the night when I'm chilling with some beers, I don't even know what he said, but whatever it was pissed me off enough for me to say, 'Fuck you, asshole.' And I took a swing at him. We're outside and there are three bouncers standing between us. Gunfire erupted out of all this. I also got into a spitting contest with Kid Rock, back when he had Vanilla Ice hair."

The Inside Out girls were, apparently, not to be messed with. It wasn't all fun and games though. Inside Out were one of the very first all-girl punk bands — certainly not the first, the Runaways, for one, had them beat. But they were still bravely stepping into a very macho world and, in the process, smashing a few doors down, particularly here in Detroit.

In addition, Inside Out was one of the first bands to perform in the Eastern Bloc after the Wall came down. The late, great English DJ John Peel had the band record one of his prized Peel Sessions. The thing is, ask them how they did it all and they stare at each other a little blankly. The naivety of youth is a glorious thing, and these girls, ages 16 to 21 when the band started, just got on with the job of writing and recording great tunes and making things happen without any sort of battle plan.

"In 1985, I put an ad in the Metro Times, and I met Karen," Mandolyn says. "She called my ad, came over and I knew right away that Karen was cool because she had 'bloody hand' earrings. She had just run away from home, and we hit it off. We talked to Cathy for the first time on the phone and were really excited. She was older, 21, so my question was whether she could buy beer. Our first show with Cathy was in February '86 at the Hamtramck Pub, but our actual first show was at the Falcon the previous year. I was 16, and I remember walking in for our first show and getting 10 drink tickets. That doesn't happen anymore."

"I'm a traditional rock 'n' roll fan — Zeppelin, Jimi Hendrix, I like jazz, things like that," says Carrell. "For some odd reason, the three of us gelled very well. I like a little bit of everything, but I added a dash of rock to this punkiness. They're writers, I'm a player."

Karen Neal, of course, needs no introduction to Detroiters. Following Inside Out, she played around town with such bands as Thrall, her own Queen Bee, and They Never Sleep, creating some amazing art-punk in the process. Plus, she's a fucking awesome and massively underrated bass player.

"I was into punk and new wave," she says. "I didn't plan on living beyond high school, and I loved the Dead Kennedys. I started writing fan letters to Jello Biafra."

Inside Out put out three full-length albums; 1990's Take You Apart, Put You Back Together, '91's She's Lost Her Head and '93's 7 Years Bad Luck, plus a heap of singles, EPs and tunes for compilations. They played with Fugazi, Leatherface, Government Issue, Tad and, as previously mentioned, the Jesus Lizard and Bad Religion. The band was inducted into the Detroit Music Awards' Hall of Fame in '93.

"We were trying to find a U.S. label and didn't know a thing about it," Neal says. "We made the best of it and then when it felt like there wasn't anything more we could do, I let go of the steering wheel. I felt like I had failed."

"It was time for a change, and everybody went off and did other stuff," Carrell adds. "But we stayed friends."

Only months after the band fell apart, Carrell was very nearly killed in a motorcycle accident.

"I had a car turn in front of me when riding my motorcycle," the drummer says. "Thank god for the helmet, but I broke one side of my body. It happened in Hamtramck, right on Joseph Campau and Caniff. That was '95, right after the band ended. I came through it though. Since recovering, I was playing in a Detroit rock band called the Civilians for about six years. I played in other little projects here and there. I toured with the Gore Gore Girls."

Neal also remained in the Detroit area, putting out a stream of great records with her many bands and projects. Mandolyn moved to San Francisco, needing a change of scenery. "I had $300 in my pocket, took off and didn't look back," she says. "I formed a cool band out there in '96 called Piston. I wanted to do an all-female thing so, out of that band, formed Fabulous Disaster. We got signed to Fat Wreck Chords, NOFX's label. We were the first all-female band on that label. We toured nonstop from '99 to 2006. We used to get fan mail from Good Charlotte."

A dubious honor indeed. However, Inside Out is back to play Small's and the girls are keen to point out that longtime fans will not feel cheated.

"It's going to fuckin' rock," Carrell says. "We've rehearsed three or four times, and it rocked. Karen and I get together once a week and go through the set. There will be more professionalism involved. I'm not going to drink before the show for obvious reasons. We know how to play — that's not the problem. Actually, you'll see the old Inside Out. It won't be as rough as it was."

For now, the band members have no plans to do anything beyond this one show, but they're happy to leave a question mark over the idea of more gigs and perhaps new songs. The girls might be a little older but the fire's still there. It's just a little different.