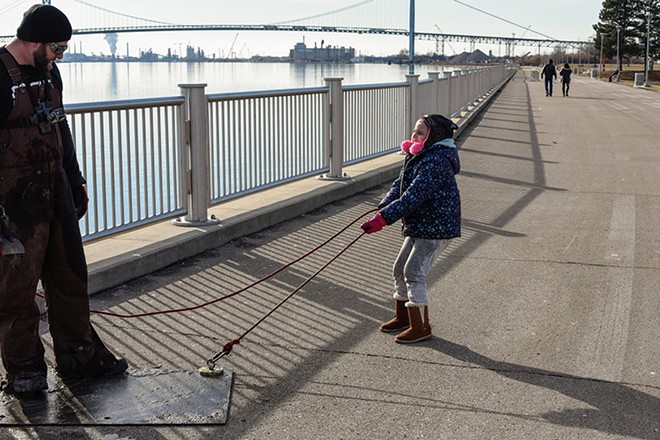 Eight-year-old Avery Vanderwal and her father Jason can often be found fishing alongside local waterways like the Rouge and Detroit Rivers.

Dressed for the job in a sparkly unicorn coat, Avery uses all of her strength to throw an unusual looking fishing line into the water: a rope tied to a heavy-duty magnet. This isn't your average fishing trip; it's magnet fishing.

"My favorite part about magnet fishing is getting outdoors and doing something good for the waterways," says Jason, but his daughter confesses that she loves their new pastime because of all the cool objects they find.

Shortly after the coronavirus pandemic began altering people's day-to-day routines, Avery and Jason found themselves with more time to spend together. With many indoor activities shut down, the two Livonia residents spent most of their time outside finding new ways to enjoy themselves.

A lover of all things outdoors, Avery also fell in love with YouTube and making videos once she began virtual school. Avery says that although magnet fishing was initially her dad's idea, she really liked it and with the help of her mother, Yvonne, she began creating videos about their finds. What started with a family YouTube channel about their outdoor adventures quickly turned into their magnet-fishing channel, the Motor City Magnet Fishers.

"We saw guys like the Kinslers Brothers and the Brockton Magnet Fisher on YouTube, and we liked the idea of having an outdoor activity we can do together as well as doing good for the environment," Jason says.

Magnet fishing starts by tying a heavy-duty magnet to a long rope, then tying that rope to a railing so you don't lose the magnet as you toss it into the water. The magnet is slowly dragged along the bottom of the waterway until it is either pulled all the way back in or finds a magnetic treasure.

"Basically all you need to start is a rope, a good quality magnet, gloves, and a bucket," Jason says. "There are a lot of other things that help, but to get started is fairly inexpensive." 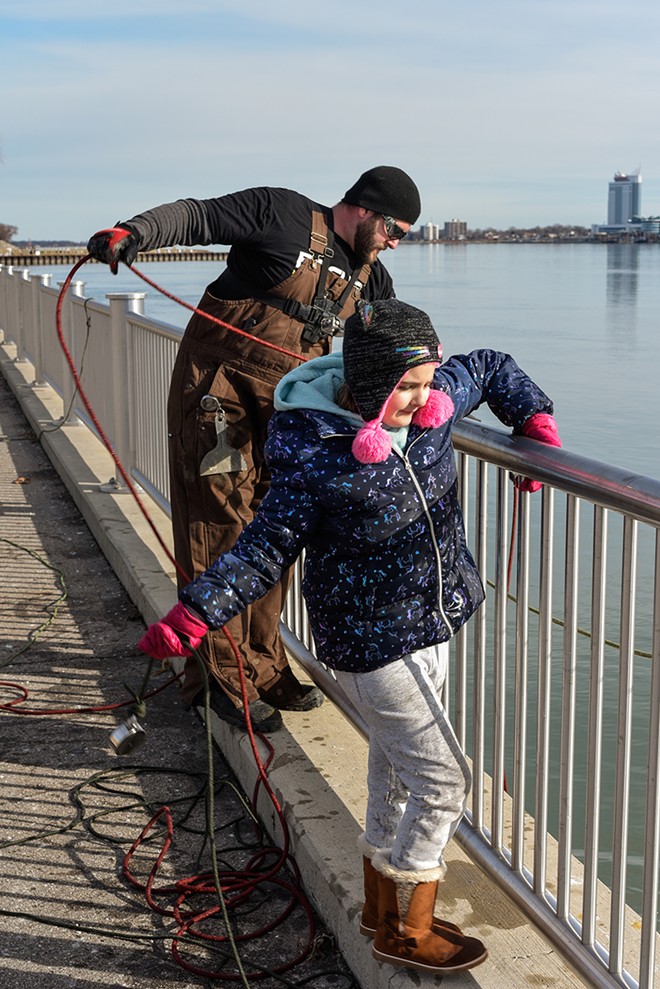 More specifically, Jason mainly uses a magnet by Rogue Magnetics, whom they are now sponsored by, that can lift 1,200 pounds. He also has one that can hold 2,000 pounds and another from Brute Magnetics that can hold 3,600 pounds. Avery uses a River and Wharf, a smaller magnet that still holds 550 pounds on each side, adding to 1,100 pounds total.

The duo continues to spend most of their weekends along the Rouge and Detroit Rivers, fishing for unusual finds. They've also gone in Livonia, Redford, Plymouth, Northville, Wayne, Novi, Commerce, Walled Lake, Brighton, Southfield, Trenton, Gibraltar, and "just about everywhere in between where people could throw items in the water," Jason says.

Jason says that his favorite spot to magnet fish is at Jefferson Avenue and Dearborn Street in Detroit, near Zug Island.

"This place is full of surprises, and the buckets always get filled up," he says. "We've also removed six large bags of trash from the shore and surrounding areas, but there is still enough trash and debris that has been dumped there to fill a garbage truck."

Out of everything these two have found, it seems that weapons are a common occurrence. A lot of their favorite finds, such as Jason's Ruger Redhawk .44 magnum and Avery's back-to-back pocket knives, have been found in the Rouge and Detroit Rivers. So far they've found three guns and a machete, as well as other unusual items, like four safes, five bicycles, car parts, tons of fishing line with sinkers, and even vending machines.

When finding a gun, Jason says there are special precautions they take to keep themselves and others out of harm's way.

"The first thing is to make sure that it is safe and stays pointed in a safe direction," Jason says. "Then contact the police to have them respond to our location. It's a bad idea to try to take the gun to the police department, as we would be transporting a firearm that is not registered in my name or a stolen firearm or one used in a crime."

This is one type of fishing where you won't see any catch-and-release happening. Everything legal that Jason and Avery find gets hauled back to the family's vehicle, and anything that can fit inside is either kept or goes to Jason's work to be disposed of as scrap. "Whatever doesn't fit into the car — we contact scrappers to pick it up and dispose of it properly," Jason says.

Another important part of magnet fishing is to make sure you're being safe and respectful.

"No permits are needed, but remember: private, restricted and protected properties need to be treated accordingly," Jason says. "If you don't know if a place is restricted or protected, make a call to the Michigan Department of Natural Resources and the local police to make sure you won't break any laws."

Jason and Avery see magnet fishing as a hobby they can do together for years to come. "We're trying to get together a group of fellow magnet fishers to participate in the Rouge River cleanup this year, and if it goes well we would like it to be an annual event," Jason says. Although most of the time it's just Avery and her parents, they sometimes meet up to fish with other enthusiasts like Tanner, the Michigan Magnet Man, who has more than 1,000 subscribers on YouTube.

For people interested in magnet fishing and who would like to get started, Jason has some simple advice. "Don't get discouraged if you don't pull up tons of cool stuff when you first start, and remember — this hobby is more about the environment than finding guns and safes," he says.

To see some of this duo's most exciting finds and to stay up to date with their adventure, see Motor City Magnet Fishers on YouTube and TikTok.