In 2001, record producer and Was (Not Was) co-founder Don Was was performing alongside Algerian Rai singer Cheb Mami at the former Chene Park as part of the Concert of Colors, Detroit's annual celebration of diversity in music, which was by then just shy of celebrating a decade.

"It was just the coolest festival," Was says. "I was really knocked out."

Afterward, festival founder Ismael Ahmed took everyone out to dinner, and Was found himself seated next to him. It was the start of what would became a yearslong relationship, and also led to one of the festival's annual traditions.

"A couple of years later, Ismael said, 'You know, we have all kinds of world music, but no one's doing anything about the indigenous music of Detroit.'" From that, the Concert of Colors' annual Don Was Detroit All-Star Revue was born, which pairs Was with various performers — some big, and some up-and-comers.

Of the rehearsals for the Revue, Was describes them as "controlled chaos."

"You know, when you're doing cover songs, you want to avoid a karaoke version," he says. "We try not to rehearse them too much, and try to capture the spirit of the songs without becoming a literal re-creation of the original. It's two different neurological activities, creating and re-creating, you know, so I try not to work it out too much."

"We run through a song once or twice, and keep our fingers crossed," he says. "It always works. And I think you capture more of the real Detroit essence. The essence of Detroit music is — I think — that it's raw music, it's honest music, and it's soulful music. So playing the right chords isn't necessarily paramount to that."

When considering Detroit's indigenous contributions to world music, the most obvious example is Motown Records, which is celebrating its milestone 60th anniversary this year. For that reason, this year's All-Star Revue is an all-Motown tribute, featuring Martha Reeves, the Velvelettes, "Funk Brother" Dennis Coffey, and more.

Ahmed says the Velvelettes are an exceptional treat because the early Motown group still has all of its original members. "There's not many Motown bands from that period who can say that," he says.

Reeves, who has performed as part of the Concert of Colors before, says the All-Star Revue reminds her of Motown's famous Motortown Revue concert tours, in which big acts like Smokey Robinson & the Miracles, Mary Wells, the Marvelettes, Barrett Strong, and the Contours were joined by acts like Martha & the Vandellas, Marvin Gaye, Stevie Wonder, the Supremes, and others.

Reeves says the Concert of Colors' goal of diversity also reminds her of Motown's ability to break through barriers in the 1960s.

"When we played the South, the audiences were separate, but we had just as many Black people as white or mixed," she says. "They all had one thing in mind, and that was having a good time and listening to our beautiful lyrics about love and happy things, and dancing."

Reeves considers the Motortown Revues to be the start of her Motown career.

"While we were driving around the country on the Revue, all of our records had charted, so we were made famous together," she says. "It was like a day camp of the best and finest musicians in Detroit, handpicked by Berry Gordy."

"It was really an amazing thing when you think about it, how one man in our house gathered the best and the finest musicians and singers and created music that will last forever." 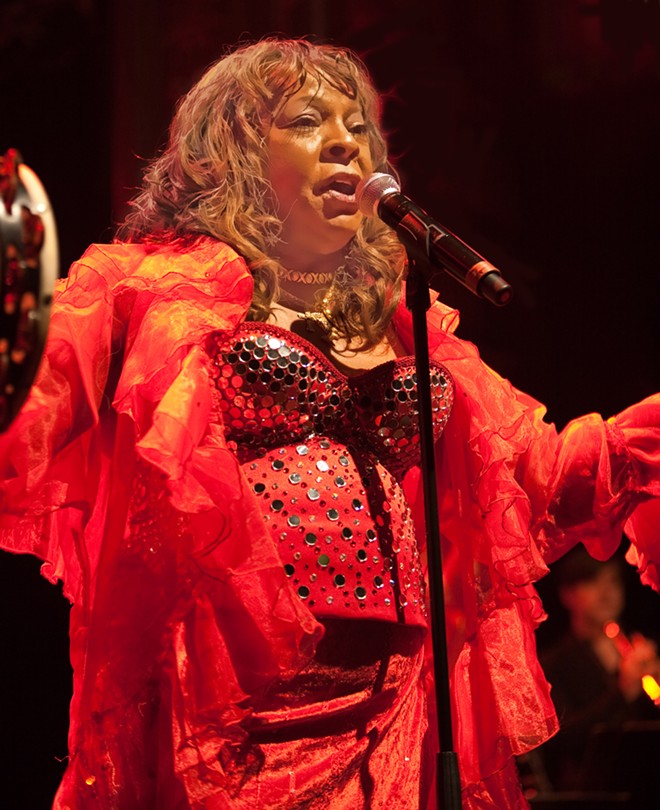 From Motown to Midtown

While Motown may have never been in any danger of disappearing, the same can't be said of the Concert of Colors, which has bounced between various benefactors and institutions since it was founded in the early 1990s. In the last year, Ahmed worried that the event might not be able to return in 2019, as corporate sponsors dried up over the past decade.

The festival has grown and evolved since it started as a one-day event at the former Chene Park, moving to Detroit Symphony Orchestra's Max M. and Marjorie S. Fisher Music Center in 2006.

For the festival's 2019 iteration, Ahmed and organizers have once again reimagined the festival, this time centering it on cultural venues in Midtown, including the Detroit Institute of Arts, the Charles H. Wright Museum of African American History, the Scarab Club, and the Detroit Historical Museum. Funding now mostly comes from foundations, community groups, and other festival partners, including the Knight Foundation Community Foundation and Midtown Detroit, Inc., and CultureSource, a coalition of more than 150 arts organizations in metro Detroit.

"There's an old saying: 'When you don't have money, you have friends," Ahmed says. "And so this year our friends are not only the DIA, but the Charles H. Wright, Midtown Detroit, Inc., the Detroit Historical Museum, the International Institute, and many, many other partners."

Ahmed is humbled that Concert of Colors continues to thrive — especially as a free concert.

"If you look over the last 20 years, we've lost the Festival of Arts, the Children's Museum," he says. "Many of those medium-sized institutions are still struggling, and many of the other festivals have gone away, or are now charging admission. To maintain a free festival for all these years has been a wonderful thing."

The Concert of Colors' Midtown move comes while officials are considering "Detroit Plaza," an ambitious multi-million-dollar proposal to transform Detroit's cultural center district into a grassy campus that would unite disparate institutions like the Detroit Institute of Arts, Wayne State University, the College for Creative Studies, the Detroit Public Library, and the Charles H. Wright Museum of African American History.

"The idea was to have a walkable week-long festival, to make this like Detroit's South by Southwest of emerging art and let people come and stay at the hotel, stay here for a week and really build upon something that's free," she says.

The festival is further buoyed by its official theme: freedom of expression.

The theme of freedom of expression is not just embodied by Motown's "Sound of young America." The Concert of Colors has long had a social justice undercurrent to its programming, as well.

This year's lineup is no exception, with exiled Egyptian political activist Ramy Essam one of the more than 60 acts that are part of the festival this year.

Essam rose to prominence as the voice of Egypt's Arab Spring in 2011, performing songs that were critical of Egypt's then-president Hosni Mubarek in front of millions in Tahrir Square. Even before then, Essam had been gaining notoriety as part of a movement of hard rock and hip-hop-influenced Egytptian music.

Even after Mubarek stepped down, Essam was later arrested by the Egyptian army. This only made him feel further vindicated, he says. "This was after the dictator, which was just proving that the story wasn't just the man himself — it's in the system."

Since the revolution, Essam has been in exile, living in Sweden and Finland and touring the world for the last five years.

Essam, who sings in Arabic and English and injects his songs with Middle Eastern rhythms and other stylistic flourishes, says he's grateful to have found a world music audience globally. Sometimes, he says he feels he's booked as part of a rock festival's world music act, and other times he says he feels like a world music festival's rock act. At Concert of Colors, he says, "I'm coming to Concert of Colors to rock the festival."

"If I was only considered like 100 percent just in the world music genre, I would miss many, many, many great festivals," he says. "So I think in the end it's a win-win for me."

Even though he faces adversity at home, he says he will never stop performing. "I had to continue because I know that I can make a difference with my music, and I know that this is a responsibility that I have to take," he says. "I believe in my weapon, which is my music."

But he also says he couldn't stop even if he wanted to.

The Concert of Colors will be held from Wednesday, July 10 to Thursday, July 18 at various venues in Midtown, Detroit; see concertofcolors.com for full schedule. Admission is free.

The best of the fest

WDET's music hosts and the public will choose the band to open the festival from the Michigan entries.

Will Sessions with the Dames

Will Sessions joins forces with vocalists Dames Brown for an 11-piece funk explosion.

Forum on Community, Culture & Race: The Power of Owning Our Voices

A roving guitar-based orchestra that will lead a procession through the DIA, the Detroit Historical Museum, and ending at the Charles H. Wright Museum of African American History.

A special "work in progress" screening of the 2019 documentary.

The Inspiration of Motown: The Influence of an Iconic Sound on Art, Culture & Social Movements

A conversation with Raina L. Baker of the Motown Museum.

Formed in Amman, Jordan, in 2013, Palestinian-Jordanian group 47soul has made a name for itself around the globe for its unique fusing of electronic and dabke influences.

Blue Note Records: Beyond the Notes

Film screening of a documentary on influential record label Blue Note. Features an introduction by Don Was, president of Blue Note.

Documentary of iconic Jamaican-American supermodel, singer, record producer, and actress, hot off the heels of a one-off performance at Detroit's Masonic Temple earlier this month.

Celebrate the 78th birthday of one of Motown's most iconic artists, backed by the Don Was All-Star Revue. This is the festival's only ticketed event, with tickets available at $100 for full concert and $50 for afterparty. Dress code is "1960s," and tickets can be purchased at thewright.org/events.