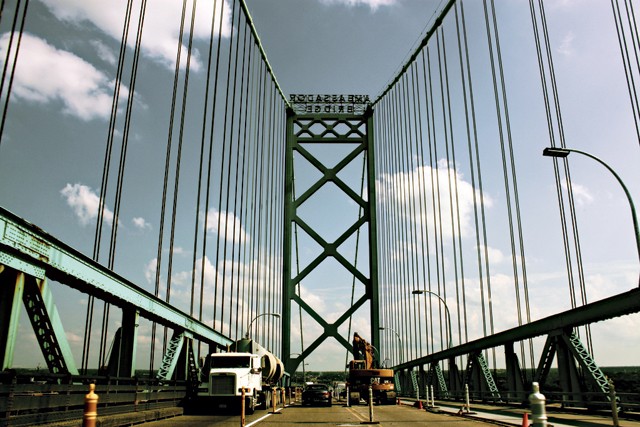 Here's what would happen if every voter went to the polls next month, got in the booth and earnestly studied the ballot proposals.

People would be still standing in line on Thanksgiving Day. One measure of the screwed-up insanity of politics in Michigan is that we've slapped six complex proposals on the November ballot, plus boatloads of candidates running in who-knows-how-many races.

Yet despite that, we don't allow voters to automatically take the ballot home, study it, and return it by mail. In Oregon, everybody votes by mail. Even in Ohio, where Cedar Point is the height of high culture, the state mails every voter an absentee ballot application.

However, in Michigan, you aren't supposed to vote absentee unless you are going to be out of town, are in jail, are over 60, working the polls that day, or pretending it's a religious holiday. (Actually, Election Day really should be democracy's highest holiday.)

But if we made it easier to vote, too many of the riff-raff might show up, as the Republicans like to mutter. So most of us are going to have to trudge off to the polls, and face all these things.

Personally, I have no opinion to share as to whether you should vote for President Obama, who saved the domestic auto industry, killed Osama bin Laden, and saved the country from falling into economic collapse, or for Mitt Romney, who would end any hope of universal health care and allow large corporations and billionaires to finish making serfs of us all. That's a hard decision.

But I have studied these ballot proposals at great length, and seriously now, folks, want to share my thinking with you. After all, you really don't want to be stuck in line when you should be starting that Thanksgiving tofurky, good vegans that you may be.

Proposal 1: The Emergency Manager Law: VOTE YES. This is the only one that is not a constitutional amendment, but a simple referendum on a law, one newly elected Republican Gov. Rick Snyder got the Legislature to pass last year.

There was such outrage at this that opponents easily collected enough signatures to put it on the ballot, suspending the law until after a vote. Most liberals and progressives are opposed to the emergency manager law, saying it takes away too much local power.

But I disagree. I think the EM law is, sadly, a necessary tool for cities whose deeply flawed governments have proven themselves unwilling or unable to make the tough decisions needed.

Case in point: Detroit. Forget the current budget deficit; the city has $12 billion in unfunded liabilities, and an incompetent council elected in a deeply flawed process. Their unwillingness to allow the state to save Belle Isle is just the latest evidence.

Detroit's only hope lies in drastic measures, and there are plenty of other cities in similar straits. Emergency managers should never be appointed lightly. But cities are a creation of the state. This is a tool that, in extreme circumstances, the state needs.

The state's unions are gambling heavily on this proposal, which would head off any attempt at right-to-work laws. They will spend heavily to try to get voters to approve it; you can expect business interests to spend even more to defeat it.

Much of the right wing's outrage will be directed against the fact that the amendment would protect public sector unions. However, the proposal does say "laws may be enacted to prevent public employees from striking," which ought to dispel any nonsense about our governments being held hostage by radical unions.

Proposal 3: The Renewable Energy Standard. VOTE YES. This is the "25 by 25" proposal to require electric utilities to provide at least a quarter of all their annual retail sales of electricity from renewable sources — wind, solar, biomass and hydropower.

The utilities are screaming that this is impossible, that it will lead to energy shortages and/or massively spiraling costs, etc., etc. They sound, in other words, like the auto companies did when it was first proposed they should be required to make cars that got more than eight miles to the gallon. Now, it is true that unforeseen things can happen. It is also true that you can't legislate progress.

But reputable environmentalists agree that this is achievable. Plus, the utilities don't want to admit this, but there is an escape clause. Not only would they be allowed to charge 1 percent a year in rate increases to achieve the standard, the law would allow them to put off the deadline if necessary to avoid higher rate increases.

It isn't clear who would decide if that was necessary — possibly, the state. Setting a renewable energy standard is also something that ought to have been addressed as a simple law, rather than as part of our constitution. But environmentally speaking, it is worth a yes.

Proposal 4: This would amend the constitution to establish a registry for home health care workers (The Michigan Quality Home Care Council) and to allow them to bargain collectively. VOTE NO. Constitutions are supposed to be basic guiding documents, not junked up with trivia. If Proposal 2 passes, these folks will have the right to bargain collectively anyway. I have no problem with them having a registry. But it shouldn't be mandated by the constitution.

Proposal 5: The tax prevention amendment. VOTE NO, NO, NO, NO. Defeating this is more important than the fate of the first four combined. If passed, it would paralyze government.

What it would do is require any statewide vote — which would have to be held in November — or a two-thirds vote of the Legislature in order to raise any tax, for whatever reason. This would destroy government's ability to respond to any crisis or disaster.

Today, you couldn't get two-thirds of the Legislature to agree to pour piss out of their boots. What few people know about this is that it is another amendment bought and paid for by Matty Moroun.

Why was the monopoly owner of the Ambassador Bridge behind this? Rich Robinson, the principled head of the Michigan Campaign Finance Network, told me, "It almost seems like Moroun is saying, 'If I can't have my way on the bridge, I am going to destroy the state.'" Hint to voters: Don't let him.

Proposal 6: International Bridges and Tunnels. VOTE NO. Megalomanic Moroun spent almost $5 million to deceive enough voters into signing petitions to support this obscene turkey of an amendment. Basically, it says that there has to be a statewide election before the state could spend a penny for "designing, soliciting bids for, constructing, financing or promoting new international bridges and tunnels." Plus it would apply ex post facto to any bridge not open as of last January. The whole point is to prevent anything from ever threatening the 85-year-old billionaire's monopoly.

Never mind that this would doom the rest of the state to economic paralysis. I doubt that there has ever been a citizen who has had a more malignant effect on this state than Matty Moroun.

More importantly, this amendment would be bad for everyone except one man, his wife and his son. The price of freedom is, indeed, eternal vigilance. That's why studying these amendments, voting on them, and stopping attempts to steal our lives is so damn important.