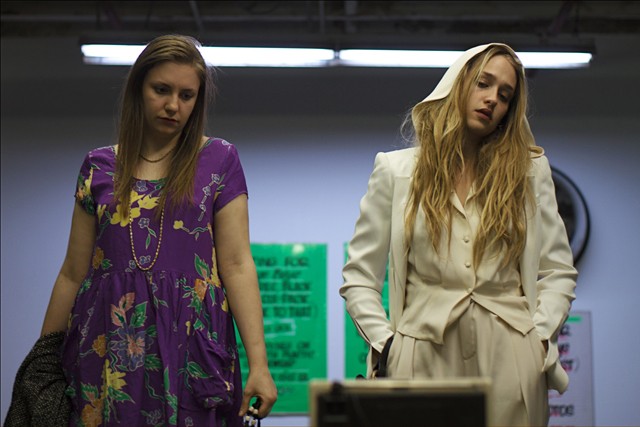 An unsparing yet self-involved exercise in Gen-Y navel-gazing (that's smart enough to display some meta instincts), Lena Dunham's semi-autographical DIY indie flick both benefits and suffers from its virtues. It delivers an unflattering yet empathetic view of generational ennui with the handmade feel of authenticity, but it can't help but be the product of its privileged background, dwelling on shallow characters who have little to say.

The setting is New York City's current bourgeois bohemia, where Aura (played by Dunham) has returned to live in her artist mother's Tribeca loft (real-life photo-artist mom Laurie Simmons). A freshly minted graduate on the romantic rebound, Aura has no job prospects and less ambition. Instead, the charming but whiney 22-year-old bumbles from one semi-humiliating scenario to the next. There are the bitchy confrontations with her self-absorbed teenage sister (real-life sister Grace Dunham — who really did win a big-deal poetry award), the awkward attempts to get a self-absorbed comedy writer and self-absorbed sous chef interested in her, and her amusing reconnection with bitchy but self-absorbed childhood pal Charlotte (real-world friend, Jemima Kirke). It's twentysomething angst writ small, with a dry sense of humor, melancholy tone and static visual compositions — trademarks of the tragically labeled mumblecore movement.

Some have lauded Dunham for bravely showcasing her frumpy, less-than-svelte figure — as if a young actress should be applauded simply for not being a perfectly coifed model. And at first, there's an admirable naturalism to how she parades her beefy all-American figure. But after a while the choice seems self-conscious, suggesting the 24-year-old writer-actor-director suffers from a less than obvious form of narcissism. Is Tiny Furniture a self-critical look at how a young person is stunted by privilege and class, or just another ironic hipster flick that tosses around art-world lingo and self-aware verbal clichés as false-proof that the filmmaker has forged her own identity?

Dunham's film is amusing and disarming to be sure, but does it actually have a reason for being? There are plenty of sharply written throwaway moments ("Did you Google 'cupcakes?'") and insiderish pop culture preoccupations (YouTube, the gallery scene, etc) but past the fact the young filmmaker seems wholly unimpressed with the pseudo-intellectuals she's surrounded by, her film never really explores how she (in the guise of Aura) struggles to forge an authentic sense of self. In a world dominated by entitled poseurs, emotionally detached parents and media-saturated culture, Tiny Furniture (the very title acknowledges the inconsequential state of things) misses the chance to search for true feelings and understanding and instead becomes another victim of cultural stereotype.