Poop-gasms? Spooch? This and more in a particularly graphic edition of Savage Love. 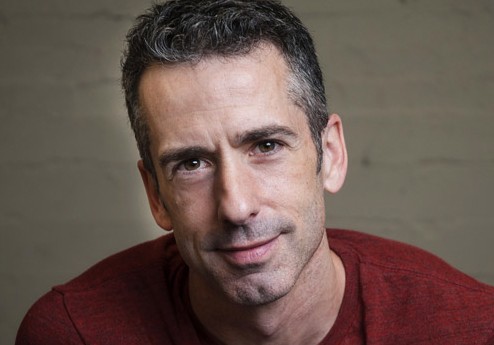 Q: Straight female with a question. It’s about something that sometimes happens to me that I’ve never really told anyone about because it’s so weird and gross. It involves my bowel movements, so it’s not very sexy. (No offense to scat lovers, but I have zero interest in “poop play.”) After I have a normal bowel movement, I pull up my jeans. When I do that, the crotch seam presses on my clit as I begin to close the zipper, and I get what I can only describe as an intense mini-orgasm. This is directly related to the recent BM because it happens only after one. I find myself just standing there in the bathroom, holding my pants up with my hands frozen on the zipper, eyes half-closed, gently pressing my jeans into my crotch while my clit just hammers out an unsolicited series of intense orgasmic spasms. It’s not really a full-on climax, rather just a dozen or so fast and strong fluttering contractions of pleasure right in my clitoral area. I find myself enjoying these post-poop-gasms when they happen, although it’s something I’ve kept to myself for obvious reasons. I am not complaining. I am merely curious to know if you’ve ever heard of this and if you know why and how it happens. Do other people have similar experiences? —Possibly Odd Or Perhaps Curious Orgasm Mostly Enjoyed Regularly

A: I shared your letter with Dr. Debby Herbenick, a research scientist at Indiana University, a sexual health educator at the Kinsey Institute, and the author of Great in Bed and numerous books about sexuality.

And her much more satisfying long answer: “There are other documented cases of people having orgasms while pooping. Most are on Internet message boards, but some have made it into the medical and scientific literature. ‘Defecation-induced orgasms’ seem to be more common than orgasms from peeing, but both kinds happen.”

Yes, yes: But why and how do defecation-induced orgasms happen?

“It’s not entirely clear, but here are some possibilities,” says Dr. Herbenick. “The pelvic nerve — which is one orgasmic pathway — links up to not only the vagina and cervix, but also the rectum and bladder. Another possibility is something called nerve ‘crosstalk.’ In essence, the genital and excretory parts are smooshed closely together, and some nerves (like the pelvic nerve) service more than one part. Thus, feelings and messages carried in the nerves can get a little muddled. For example, some people can have vaginal pain from bladder problems. Similarly, people describe genital orgasms from stimulation of nearby parts, and nerve crosstalk is thought to be part of that.” (Want to shut up an “intelligent design” creationist? Ask them to defend the ill-advised, none-too-intelligent smooshing together of our excretory and reproductive systems — after making them Google “obstetric fistula.”)

“POOPCOMER doesn’t have to like the fact that she orgasms from pooping,” says Dr. Herbenick, “but it’s better than the opposite scenario: unintentionally pooping during orgasm. That also happens.”

Q: You always take questions from BDSMers and cuckolds and other hardcore sexers, but will you take mine? I plead with you! Won’t you please offer some advice for me, a simple heterosexual girl having problems with her heterosexual male?!? My boyfriend always closes and locks the door behind him when he pees. It hurts my feelings! Being a part of his pissing experience would turn me on and arouse me! He claims he does this because he is pee-shy. But he pees in public restrooms in front of other men! So if he knows that I like it, and if the issue isn’t about being pee-shy, then why can’t he pee in front of me?!? Why is he “NO GIRLS ALLOWED” about this?!? I would be grateful for your advice on how to get him to relax with his peeing moments a little more because I’m bored. Thanks! —Personally Insulted Since Sexy Entrance Denied

A: You’re just a simple heterosexual girl who wants to be part of her boyfriend’s “pissing experience” because that would turn you on — nothing kinky or hardcore about that, no sir. You’re just after some old-fashioned, all-American, plain-vanilla voyeuristic piss play.

Q: Longtime reader, first-time letter writer. My 13-year-old stepson leaves his spooch on the goddamn toilet seat. How do I tell him to clean up after himself? I don’t know how he gets it on the toilet seat! Logistically, it baffles me! —Step-Parent Ain’t Not Kleaning Spooch

On to your questions …

Logistics: Your stepson faces the toilet seat as he would when he pees and has himself a wank. He thinks he’s destroying the evidence when he flushes, SPANKS, but he’s obviously missing the drop or two that land on the toilet seat. Teenage boys are not famous for their attention to detail or for cleaning up after themselves. Replacing your white toilet seat with a black one might help your stepson notice that flushing isn’t enough.

Telling him to clean up after himself: Your stepson’s father should have a talk with him. “You’re making a mess of the toilet seat,” his dad should say. “Put the seat up and wipe it off when you’re through.” If your stepson protests that he’s careful when he pees, his dad should tell him that he’s not talking about piss. That poor kid will be so mortified that he’ll blow loads out the window before he masturbates in the bathroom again.

Q: I need your help. I’m a 26-year-old straight girl and I’ve been dating this great guy for a few months. Our sex life is really satisfying, fun and adventurous, due in no small part to the fact that he has a lot of kinks. He has a thing for scat, though, and that has thrown me for a loop. He doesn’t expect me to engage in poop play, but I know he watches this kind of porn sometimes and it freaks me out. Would you break up with someone due to one extremely squicky kink? —So Not Into Poop

Important note: A lowly, officious, and quite-pleased-with-herself copy editor has gleefully informed me that Urban Dictionary defines “spooch” as “semen” or “a man’s climax.” While I have the utmost respect for the modern-day Samuel Johnsons at Urban Dictionary, I refuse to acknowledge “spooch” as a synonym for semen or the male climax.

On the Lovecast, Dan speaks with the Perverted Negress about meeting polite kinksters online: savagelovecast.com.