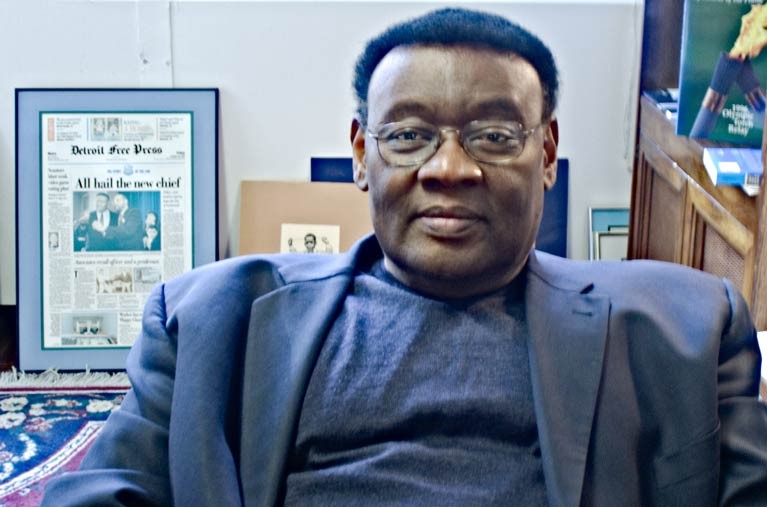 It's a surprise to hear that Dr. Isaiah "Ike" McKinnon, Detroit's former top cop, believes that marijuana should be legalized and is speaking out on the issue.

"I've never taken a public position on this, but I think it's time to do so," McKinnon says. "We have to stand up for things we believe are right. ... My position is, let's look at this realistically and honestly. Too much law enforcement money and resources are being used on this. There are better things to spend our money on."

McKinnon was a Detroit Police officer from 1965 to 1984 and Chief of Police from 1993 to 1998 during Mayor Dennis Archer's first term. While serving as chief, he met secretly with southwest side gang members to create athletics and tutoring programs, talked a woman down from jumping off the bridge to Belle Isle, and did the same for a man threatening to jump off the People Mover. After retiring from the police department, Dr. McKinnon took a position as associate professor of education and human services at University of Detroit Mercy (UDM) and became a motivational speaker. His position that marijuana should be legalized joins that of a growing group of former law enforcement officials who have come to the conclusion that our drug policies have to change. It's a tough transition to make for a police officer who has been trained to believe just the opposite.

"Most people who were on the other side of this, it's not like, 'OK, now I'm on this side,' it's a slow process," says Neill Franklin, executive director of Law Enforcement Against Prohibition (LEAP). "I'm just happy he's acknowledging these things about marijuana. It's a great start. I definitely applaud him for that.  It's challenging for people. Most police are in it because they want to do good for their communities. To come to the point where you think all of this work in drug enforcement has really been problematic for my community, it's kind of hard to swallow."

LEAP is a group of current and former law enforcement officers who are speaking out against the current policies regarding drug use, addiction and crime associated with the drug business. Franklin is a retired 34-year veteran of the Maryland State Police — where he once led the drug unit — and Baltimore Police Department. Franklin and McKinnon have never met, but it is that firsthand view of the effects of drug policy that brings them closer in spirit. McKinnon's doubts about drug policy began to grow as far back as his days serving with the Air Force in Vietnam in 1964 and '65. He knew other servicemen who used or even sold marijuana. He joined the Detroit Police Department in 1965 and a number of events made an impression on him.

"John Sinclair was arrested for one or two joints and sentenced to some ridiculous amount of time and that stood out for me," McKinnon says, referring to Metro Times columnist Sinclair, who in 1969 was sentenced to 10 years for giving two joints to an undercover cop.

"I was having some thoughts when Judge [George] Crockett started giving lighter sentences for people who had small amounts of marijuana. I was wondering are we certain this is the kind of thing that is totally detrimental to people. People I was in the military with, they smoked it in Vietnam. Later on, they would always laugh at me, a cop going up through the ranks. There were people who told me later on after I retired [in 1984] that they were using drugs. My son's godfather, who is deceased now, Brian Flanigan [a former Free Press reporter who is in the Michigan Journalism Hall of Fame], told me later on after I retired that he had used drugs. He asked me if I would have locked him up. I said, 'Hell, yeah,' because it's against the law."

McKinnon says that his doubts never affected his police work. He had taken an oath to enforce the law. And regarding personal use of the substance, McKinnon says, "I never tried it and I never will."

Still, the fact that people smoked marijuana and didn't become derelicts made an impression on McKinnon, who says, "These were professional people and they were normal people and it didn't drive them crazy as people say. Which is just the opposite of people who use heavier drugs like heroin and cocaine, you can see a major difference in them."

McKinnon hasn't come all the way around on the drug war, but he sees little harm in marijuana when compared to other substances. He's in company with the California Medical Association, which a couple of weeks ago called for the legalization of marijuana, and with most people who seek changes in government drug policy. They see marijuana as rather benign when compared to the more addictive drugs, and some find it less dangerous than the legal substances tobacco and alcohol. But they're still not ready for totally ending drug prohibition.

Those who argue for a total armistice on drugs take the position that most of the problems and violence associated with drugs is caused by prohibition itself. They say there wouldn't be drug cartels if drugs were legal and regulated. They believe drug addiction should be treated as a public health issue. That drug users are forced into a lawless social underworld and the stigma of drug addiction keeps some from seeking help. Not to mention that the War on Drugs has been an unequivocal failure. Within the past six months the Global Commission on Drug Policy and the National Organization for the Advancement of Colored People have called for an end to the drug war — as U.S. Surgeon General under President Bill Clinton Jocelyn Elders did previously.

"We are finding that, at least with marijuana, the majority of the people have moved their position," says LEAP's Franklin. "There was a time I thought like that. I arrested people. I led a drug unit. I supported prohibition probably stronger than most. It took me a few years to get to that point where I saw that it's not just marijuana; it's the policies for all drugs that are wrong. I guarantee you that if [McKinnon] were to continue look at this issue, if he were to continue educating himself on this issue and look at it from a global perspective, I'm almost certain he would arrive at the same point of view as I am."

McKinnon is certainly a guy who seeks education. He earned a master's degree and studied for his doctorate while serving on the police force. At this point, he's not interested in becoming an activist on this issue. It really only came up because Mike Whitty, an adjunct professor at UDM and a member of the advisory board for the Michigan Chapter of the National Organization for the Reform of Marijuana Laws, asked him about it one day.

"I've never spoken to anyone about this," McKinnon says. "Nobody ever asked me about it before."

That type of discussion will take place with the program "Should We End the War on Cannabis? A conversation with Ike McKinnon and Professor Mike Whitty" at 7 p.m. on Dec. 6, at the Baldwin Public Library in Birmingham. This event has no affiliation with UDM.

"The goal is to try to elevate the topic to the level of a serious policy debate and to put the problems of cannabis closer to the public health arena," says Whitty.

McKinnon says that there are probably many other chiefs of police who agree with that, but can't say so because they are appointed officials who must support the policy of whatever politician appointed them. It's later, after retirement, that some perspective sets in and they also feel free to speak their own minds.

"When you think about it in terms of your health, if it brings relief, people are going to want to use that," McKinnon says. "I can't think of anybody who has died from marijuana."

McKinnon is only willing to go so far in his reassessment of marijuana law, but his voice, as an old anti-drug warrior, should be heard loud and clear. He more than most has seen how it is fought and the carnage it causes.