In White Lake, the Root restaurant sources it locally 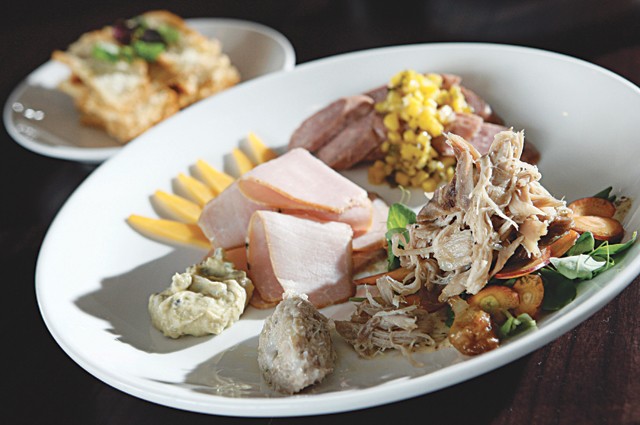 Chef James Rigato wants you to know how much of a locavore he is. He lists his regional purveyors on the Root's website, up to and including his recycler and his glass guy (Libbey in Toledo). The tasting menu lists Michigan sources from Kalamazoo to Detroit (though coffee isn't grown in K'zoo — and R. Hirt Jr. didn't make those cheeses himself). If you order shrimp linguine, the server will tell you the critters spent their early days in salt-water tanks in Okemos.

The Root's owners first looked to open in Royal Oak but ended up, in May, in way exurban White Lake because of a good deal on a liquor license. The location hasn't hurt business, which was quite healthy on a Tuesday night; on a Saturday, it can be hard to get a reservation till late. There's a satisfied, bustling atmosphere, with no one dressed up.

In his heartfelt case against Eating Animals, Jonathan Safran Foer declares that the only disadvantage of vegetarianism is that "your life will not be as rich." He wouldn't say that if he'd dined on Rigato's vegan pumpkin pot pie, which boasts a lot more umami than plenty of meat dishes do. It's filled with roasted pumpkin purée — it's the roasting that makes the difference, smoked farro (a wheat-like grain that the New York Times called "more elegant than earnest"), parsnips, potatoes and lots of kale, in a flaky crust.

Rainbow trout from Wisconsin ("your fish are swimming when we receive your order") have a crisp skin and are served with a side that would ordinarily make me turn tail — creamed corn — but it's a marvelous pairing.

Even better is that Okemos shrimp linguine, a masterful combination of textures; the whole dish is infused with the taste of smoky house-made bacon, and pecorino adds some nuttiness.

Pork shoulder, which can be grossly fatty, is trimmed down here and braised in cider, creating lots of good gravy; it's served with cheddar grits that melt in the mouth.

All those entrées are first-class, or you could just dine on an assortment of starters: pork pasties, crab cakes, baked Michigan Brie, scallops, three salads. The scallops (not from Michigan) are perfectly seared, served on brown butter and a white bean purée, with a sliver of grapefruit for tartness, and sprinkled with shavings of the top part of Brussels sprouts. In keeping with the "know your food" theme, your server imparts interesting tidbits about each dish.

An arugula salad makes good use of pumpkin seeds, roasted quince (a little-used fruit that's somewhere between a pear and an apple, transformed, as always, by the roasting) and a cranberry Riesling vinaigrette. I can't say I could have identified those flavors in the dressing on my own, but atop the peppery greens, the tart flavors worked.

Onion soup is made with chicken broth instead of beef, for a bit less umami and less sweetness than usual; accept the offer of server-ground pepper — it's very good. Even better is butternut squash soup, again not too sweet, with tiny cubes of apple for crunch and flavor and a dollop of maple crème fraîche.

My only partial disappointment at the Root was the burger (Michigan grass-fed beef). I didn't detect anything special about the meat, and the bun, though house-baked, was cool, too similar to grocery-store buns and way too big. The ketchup was Heinz! At a time when artisanal ketchups are all the rage!

The hamburger bun is of consequence, restaurateurs. It should be of an interesting bread, one that would be worth eating on its own. Yet it should not overwhelm the meat (The Root's was tall, hard to get one's mouth around). It should be warm, even lightly toasted if the diner requests.

And we know that the Root can produce good bread, because of its alarmingly fine rosemary focaccia, served warm and buttery.

The other Root sandwich is fried bologna. Readers, I did not order it, though it's advertised as made with "Yale, Michigan's signature bologna." Our server said the sandwich was designed to take customers back to their childhoods, and that many are ordered for lunch. It costs $8 for an amble down memory lane, with green chili mustard instead of French's.

Some desserts are also of the tongue-in-cheek, updated-childhood variety — peanut butter pie, a s'more with dark chocolate pudding cake; both the graham cracker and the marshmallow are house-made, and you can't get more local than that. A non-nostalgic choice would be an espresso martini, Spanish coffee (brandy, Kahlua and Grand Marnier) or an orange-and-cardamom crème brûlée.

Wine is where Rigato declines to stick close to home, choosing mostly from terroirs way west or south of here. I tried the sole Michigan red, out of state pride, and was disappointed. Eight Michigan drafts are on tap, along with Belgian specialties.