Why should anyone be aware of the Witches? The Witches are aware of everything else. 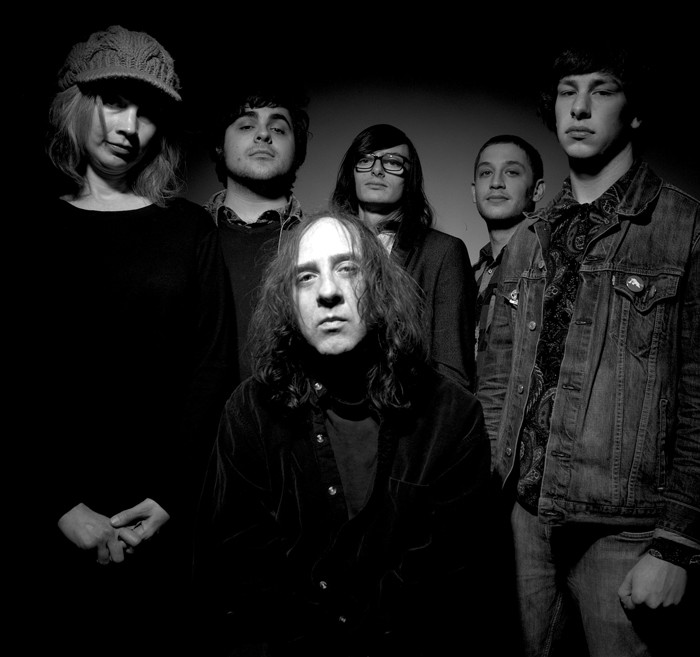 Over the course of his career so far, Troy Gregory has played with artists as diverse as Flotsam and Jetsam, Prong, Crime & the City Solution, Kim Fowley, and the Dirtbombs (and we’re only scratching the surface there). He’s also performed as a solo artist, but, for a decade-and-a-half, he has returned time and again to his musical beaux, his love affair, the Witches.

It’s understandable; while the Dirtbombs are pretty much Mick Collins’ band, and Prong was all about Tommy Victor, the Witches are Gregory’s baby. The band is where he feels most at home, where he goes to stretch his feet out and create.

Gregory is so emotionally invested in the Witches, he swears that the band is next to impossible to describe. As far as he’s concerned, every band and musician that he’s ever enjoyed, every experience, every nuance of his life, has been blended and melded into this great musical beast. To attempt to boil it down into a few sentences would be to do it an injustice. However, we’re not quite as close to it as he is, so we’ll take a shot.

Gregory is an excellent writer of pop songs. Not that he and his band wear headsets and do dance routines, but his tunes have massive hooks and they generally build and build. His verses tease, like really good foreplay. His choruses crash in and bring the tune to a heady, frothy climax. That’s just the foundation, though. The pop song is Gregory’s sketch, or blueprint. He’ll build up by adding swathes of echo, maybe some electronic gadgetry, and prominent keyboards. We’re reluctant to say “psychedelic,” but the evolution of the word into a genre label allows it to work here. Gregory’s voice has a touch of the Brit-pop about it (Stone Roses, Soup Dragons, Inspiral Carpets), which only adds to the dreamy, textured vibe of the music.

Give it a few years, mind you, and the band might sound completely different. Gregory says that the music is constantly developing, turning into something and evolving. “The Witches have never tried to do a genre,” he says. “You could say that it’s rock music because it’s using standard instrumentation of guitars, drums, keyboards, bass. The idea of genre itself — it’s all sound, it’s all vibration. It’s another way of selling it, and you can see it as a way to understand. But to work within a genre like that, especially if this is how you go through life being a songwriter and a musician, and you never think you totally arrived until you’re dead and then you move onto another platform and use a whole other medium. Or the medium at that point uses you. Or you realize you and the medium were the same thing.”

OK, so it’s only fair to mention at this point that Gregory likes to go off on tangents, dipping his toes into a startling array of subject matter, though he somehow expertly arrives back at the original point. During the course of this interview, we only get to ask about four questions, while Witches keyboardist Mary Alice, sitting alongside Gregory, barely opens her mouth at all. It’s not that Gregory is egotistical — not at all. He does, however, enjoy exploring a subject thoroughly, delving into every nook and cranny before he’s done. It’s a charming trait, though it does lead him to ask, “What were we talking about?” more than once.

Gregory says that he first used the Witches name while at school — it was the imaginary band name that he doodled on his books. “I got bummed out because I heard that the Grateful Dead used to be called the Witches,” he says. “Years and years passed, and then I did some recordings myself. I wrote my name on the cassette, and it looked so boring so I just put ‘the Witches’ on that. This was 1996. When that first cassette started going around, everything changed.”

The lineup of the Witches has certainly changed a lot. Craig Adams (Blaire Alise & the Bombshells) is on guitar these days, alongside Peter Geloso. Stefan Carr plays bass, and Evan Hakim is the new drummer, replacing Eugene Strobe (although Strobe will be performing with the band this weekend). Gregory says that, by the time the Witches play again, the personnel may have shifted again.

“To stop people doing things, like, ‘You can’t be in another band or you can’t do artwork,’ seems ridiculous,” he says. “It’s a bunch of people getting together to work on something, whether they’re making a zombie movie, painting a mural, or cleaning up a toxic swamp. Whatever reasons people get together to create something. You work with people who you’re looking for their input, at least their emotional input.”

It’s an interesting approach — to allow the band to shift, all the while soaking up the emotional input of the many, varied members. In 2014, though, who makes up a Witches audience? “It’s different ages of people,” Gregory says. “It’s not one gender, it’s not all one color, and it’s not all one style of dress. Like, when someone calls someone a hipster — I find that the oddest thing, because who isn’t? Who’s doing the calling?”

After one of the longest monologues we’ve ever heard, Gregory eventually circles back to the original question: Why should anyone be aware of the Witches right now? “The Witches are aware of everything else,” Gregory says, with a sly smile. “This has been my main thing for 15 years — to try to keep members in while I’m off doing other things — some for the cash. Some people think [it] means that you’re only doing it for the money. Trust me, I thought the Dirtbombs were a fantastic band. If I didn’t like it, I wouldn’t have been in that band for nine years on-and-off. I still do stuff with Mick now and then. But I probably wouldn’t stay on the road. None of them would. The idea of ‘greedy musicians’ is amazing. Like, you’re making all this money.”

… And he’s off again, racing through subjects at an impressive speed. He looks down at his hands a lot during the interview, eyes flitting from left to right as if there’s a computer in there somewhere, and he’s downloading data-memories. The truth is, Gregory genuinely lives this shit. “When a priest gets home, he doesn’t say, ‘I’m done with that spirit crap, now it’s time for my private life,’” he says. “I can never understand when musicians say that they’re going to take some time off. How do you do that? You behead yourself? This band has been a thing I was trying to do for a long time and it developed out of habit.”

The Witches will soon start work on a new record, and then there will be a “Witches” film, which Gregory says is called Daisy Maisy Muck. That starts shooting in March, and there will be a soundtrack album too. Before all that, though, the band plays on Friday at the Magic Bag. The band will be playing songs from each of its records. “You can expect atmosphere, meaning, being a soundtrack to someone’s evening is no problem to me,” he says. “The whole idea that people will come and completely devote themselves to your presence on stage and every note that gets played is retarded. ‘Oh my god, those people are talking while I’m playing!’ Fuck you. This whole, ‘Worship me, make an effigy out of butter for me and spread me on everything that you love,’ it’s amazingly delusional.”

A butter effigy of Troy Gregory is something that nobody needs.