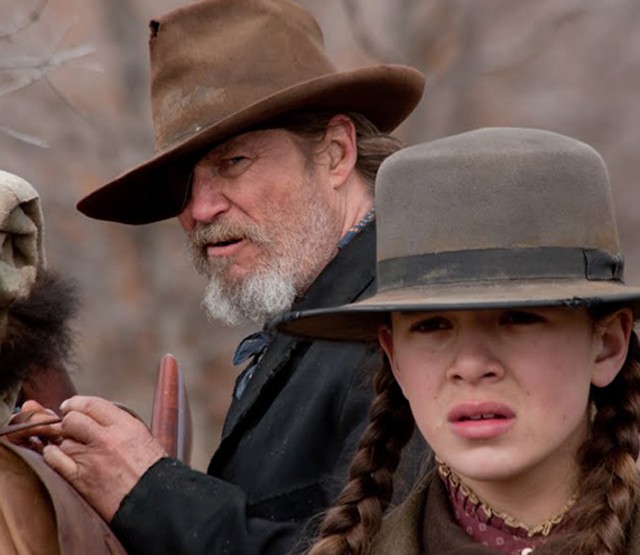 Whatever your memories of John Wayne's True Grit (if you have memories of it at all), they probably outsize the film's actual virtues. Though the Duke walked away with a Best Actor Oscar, the 1969 film is an uneven affair, nostalgically remembered for its darkly comic characters and a few signature movie moments. Watching it today, however, there's no getting around the fact that co-stars Kim Darby and Glen Campbell are pretty weak actors, and that Wayne was mostly spoofing a persona he'd built his entire career upon.

Odd as it may sound, by honoring the vernacular eccentricities of Charles Portis' original novel with a faithful, no-frills adaptation, the Coen brothers have produced their most traditional and accessible film yet. And that's not a bad thing.

Like its predecessor, their True Grit follows 14-year-old Mattie Ross (Hailee Steinfeld delivering the best youth performance in years), a precocious teen who arrives in Fort Smith in order to hire the town's toughest marshal. That turns out to be Reuben J. Cogburn (Jeff Bridges), a beaten-up, one-eyed drunk with a ruthless killer instinct. Ross wants Cogburn to hunt down and capture her father's killer, Tom Chaney (Josh Brolin) — but under the condition that she can accompany him. He agrees, then ditches her as soon as possible, taking up with a Texas Ranger (Matt Damon) who's been tracking Chaney for the killing of a senator (and his dog). But Mattie's no pushover. She forces her way onto the posse, turning an unlikely alliance into a dysfunctional trio.

Tight and efficient, the Coens' Western is more homage than reinvention or deconstruction, tapping into the genre's sturdiest gunslinging tropes while maintaining their sardonic view of violence. Portis' writing is similarly black-hearted, sharing the same delight in language as the sibling filmmakers. He fills his characters' mouths with a savory, hard-boiled courtliness that approaches the poetic, and seems right at home in the Coen brothers' hyper-linguistic filmography.

As also might be expected in a Coen brothers film, even the most minor character trades in entertaining eccentricity. But unlike the original, in which Cogburn assumed a comically condescending attitude toward his teen client, Bridges' marshal not only develops a grudging respect for Mattie, he eventually treats her as his equal. Watching their relationship quietly develop is one of the many pleasures True Grit has to offer. And unlike Wayne's amusing but one-note performance, Bridges brings something darker and more complex to his role. Cogburn is buffoonish on the surface but violently competent when needed. Similarly, Damon puts in an egoless character-actor performance as the ridiculously self-serious Ranger La Boeuf. Indulging in La Boeuf's absurdities, he still manages to maintain the man's dignity and professional ability. This more-than meets-the-eye approach to character (or, ironically, in Chaney's case, less-than-meets-the-eye) is both refreshing and unique for the Coens, who tend to revel in their misanthropic impulses.

From funny to exciting to poignant, True Grit's narrative can turn on a dime, yet mostly maintains a deliberate, deadpan rhythm. This gives the movie time to revel in cinematographer Roger Deakins' (a longtime collaborator) gritty yet exquisitely composed images. Hopefully, his work will finally be rewarded by the Academy Awards. It's long overdue.

If there's a downside to True Grit, it's that the Coens fail to build up to Cogburn's final showdown with Chaney and his outlaw boss, 'Lucky' Ned Pepper (Barry Pepper). Instead of driving toward a rousing finale, their ending feels rushed and a tad unsatisfying. It's a surprising stumble in a film that otherwise delivers plenty of charm, wit and old-fashioned adventure.