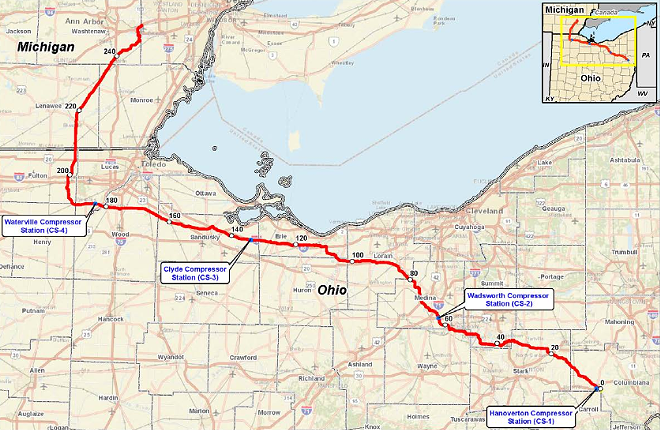 Earlier this month, President Donald Trump filled out the board at the Federal Energy Regulatory Commission. With a voting quorum restored, FERC has now given formal and final approval to the Nexus natural gas pipeline, which will traverse 255 miles of Ohio and the southeastern portion of Michigan into Canada.

Compared to the numerous other pipelines in the mid-Atlantic and Midwest regions, Nexus encountered a concerted pushback from property owners along the proposed route. While the Rover pipeline was given fast approval (and has subsequently spilled millions of gallons of drilling mud into Ohio wetlands), Nexus ownership was pulled into legal battles in multiple jurisdictions. Cleveland Scene and Metro Times reported on the fight back in March

FERC granted approval to the project's environmental impact last fall, igniting a fair amount of press attention at the same time that widespread protests were breaking out against the Dakota Access pipeline in North Dakota. Community meetings along the pipeline route in Ohio underscored the safety and environmental concerns that grew in each county — Summit, Medina and Lorain seeing particularly vocal opposition.

A lawsuit was filed against Nexus and FERC in May, seeking an injunction against the pipeline and citing the Taking Clause of the Fifth Amendment (because Nexus will be drawing natural gas from the U.S. and sending it immediately to a foreign country, bypassing any domestic customer base in Ohio or Michigan). That case, playing out in the Sixth District of Ohio, is still an open and active docket. In the event that the case is dismissed or that the judge rules in Nexus' favor, there are administrative rehearing avenues that homeowners can pursue.

Still, though, this news has been foreseen for some time; FERC is not known to reject pipeline infrastructure projects like this. "The new commissioners at FERC wasted no time in using their rubber stamp," Paul Gierosky tells Scene. "Of course it's disappointing, but it's not unexpected. And this is not the final act."

Gierosky represents the Coalition to Reroute Nexus (CoRN), which helped facilitate the legal action against Nexus and FERC. He points out that Nexus must still obtain a water quality certificate from the Ohio EPA and a Clean Water Act permit from the U.S. Army Corps of Engineers. "The ability to obtain those permits ... in other states like New York and New Jersey ... has become quite contentious," he says. "Whether that will be the case here in Ohio has yet to be seen."

And as we've reported before, CoRN has shown a will and dedication to continue this struggle as long as needed.

"It is our intention," Gierosky says, "to use every avenue and every resource available to us to expose this usurpation of our constitutional rights, this abuse of power and law by the Federal Energy Regulatory Commission."