Trump’s confrontation with Iran was a fight everyone lost 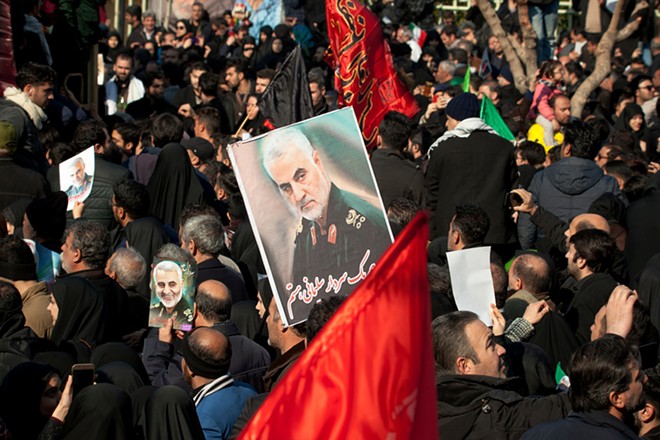 For a couple of hours last Tuesday night, I had the sinking feeling that the United States was about to embark on yet another generational conflict. Iran had responded to President Donald Trump's killing of its Quds commander, General Qassem Soleimani, by launching missiles and rockets at two American bases in Iraq. Days earlier, Trump had vowed on Twitter to "quickly & fully strike back, & perhaps in a disproportionate manner" if Iran did so. He said that the U.S. would target 52 sites — one for each of the 52 hostages Iran took four decades ago, including some that are "a very high level & important to Iran & the Iranian culture." (Targeting cultural sites is a war crime, but never mind that.)

Given the rhetoric — and Trump's pathological need to prove how much tougher he is than Barack Obama — it was difficult to see how the U.S. could back down. Missiles would be in the air soon, headed toward Tehran. Perhaps Iran would make good on its threat to level Dubai in response, or perhaps it would attack Israel. Lots of people would die. The worst-case scenario was about to play out on live television.

Iran hit the brakes. Its retaliation was more for show than to cause harm. No one was killed. After the attack, Iran said it didn't intend any further action. It offered Trump an off-ramp.

The next morning, a slurring and snorting Trump took it. He said the Iranians backed down. He insisted (without evidence) that he had killed Soleimani to prevent an imminent attack. He patted himself on the back for being tougher than Obama. He repeatedly lied about Obama's nuclear deal with Iran. He promised to slap more sanctions on Iran. He urged NATO — the allies he's alienated — to get more involved. He urged Iran — the country he's antagonized — to negotiate a new nuclear deal, even though he withdrew from the last one.

It was an odd speech. The optics were unsettling, too. Trump sounded off, flat, heavy, exhausted. Maybe he hadn't slept well — he'd just bumbled his way to the precipice of a world crisis, after all. (To be fair, Sen. Lindsey Graham thought it was Trump's "Tear Down This Wall," so your mileage may vary.)

Now that things have calmed down — for the time being, anyway — I've been trying to figure out what exactly the Iran standoff accomplished. What, in other words, was the point of stoking this fire?

I don't see how the affair benefited the U.S., unless you ascribe to Soleimani god-like superpowers. The Quds force has about 20,000 members; its leader's death won't affect operations. The idea that killing Soleimani disrupted an imminent attack is far-fetched at best. Instead, Trump felt pressured by the Republican hawks who will judge his impeachment trial and wanted to avenge a recent Iranian-backed militia action against the U.S. embassy in Baghdad.

I’ve been trying to figure out what exactly the Iran standoff accomplished. What was the point of stoking this fire? tweet this

In the process, the U.S. made itself even more of a pariah. The Iraqi parliament voted to expel American troops, and then the U.S. threatened to cut off Iraq's access to a New York Fed account holding oil revenue (after Trump had threatened to impose sanctions on a supposed ally). Protests against the Iraqi and Iranian governments became protests against the American government. The Iranians bailed on their commitments to the Obama nuclear agreement. European allies grew increasingly frustrated. The region is no closer to peace today than it was before Soleimani was killed, nor is the U.S. any closer to a resolution with Iran.

America, it seemed, gained nothing, except a dead adversary.

Trump, perhaps, gained a campaign talking point. But a USA Today poll found that, by a two-to-one margin, Americans thought Trump's decision had made the country less safe, and a majority thought his behavior toward Iran was "reckless." Maybe that's why his polling numbers remain low. In any event, Nancy Pelosi will transmit the articles of impeachment to the Senate this week, and this episode will fade into the background as Trump's trial begins.

That leaves Iran, which initially looked not too worse for wear. To much of the world, Trump was the belligerent; Iran — its atrocious human rights record aside — had played the grown-up. It had stopped things from spiraling out of control. And if Iraq did boot coalition forces, that would likely strengthen Iran's regional position. And while Trump could levy more sanctions, there was only so much juice left in that squeeze.

But then the world learned — and Iran admitted after three days of denials — that a Ukrainian 737 that crashed outside of Tehran shortly after Iran's missile strike wasn't downed by mechanical failure, but by an Iranian surface-to-air missile. On heightened alert, the Iranians — who, ineptly, hadn't shut down commercial flights — mistook the plane for an American counterattack and got trigger-happy.

Iran tried to blame American aggression for the 176 lost lives, many of them Iranian, but by Saturday, Iranians weren't having it. In Tehran, protesters were shouting, "Death to the dictator!" and "Death to liars!" according to videos posted to social media. Days before, the country's anger was pointed at the U.S. No longer.

In the end, this seems like a fight everyone lost.