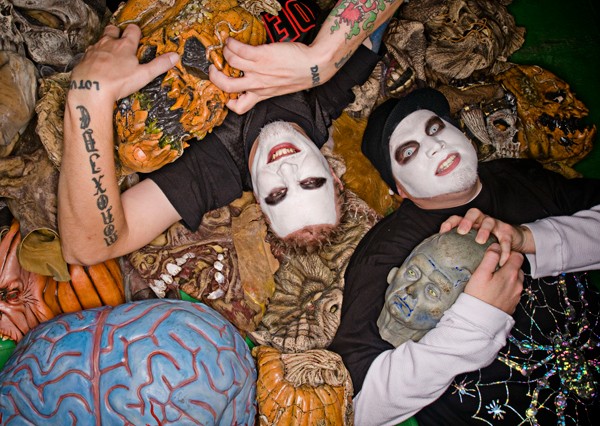 So much has been written about Psychopathic Records, the Insane Clown Posse, Twiztid and their loyal Juggalos (fans of ICP and anyone connected with them, for those new to this) in the mainstream media that it's nearly impossible not to have a preformed opinion of what the artists involved could actually be like. Opinions are like assholes. ...

Take Twiztid, the rap duo commonly perceived to be ICP's second in command at Psychopathic. Jamie Madrox (real name Jamie Spaniolo) and Monoxide (aka Paul Methric) have just released their eighth full-length album packed with pissed-off, undeniably controversial and, truth be told, deliberately inflammatory lyrics. They've written songs with titles such as the horrifically sexist "Jenny's a Fat Bitch," and Gangsta parody "Sex, Drugs, Money and Murder," and they look like Marilyn Manson's skater cousins. It'd be pretty easy to write Twiztid off as brainless puppets of the ICP machine.

Meeting Madrox and Monoxide at Psychopathic Records HQ in Farmington Hills, it's almost an immediate relief that they're not "in character." The makeup is in the pot and, as a result, the vibe's relaxed. Without makeup, the two look like they've spent much of their 20s skating to hip hop from a street corner boom box, and they'd probably be doing that now if not for Twiztid. In other words, in baggy jeans and tilted baseball caps there's nothing startling at all about Twiztid in their everyday garb. The guys are both amiable and polite, though, once the conversation hits full flow, Madrox finds it increasingly impossible to get a word in edgewise. That's no dig at Monoxide, but the slighter of the two gents is more frenetic and seemingly on edge than his chilled-out comrade.

Neither of them is monsters. Neither has any goofy plans to subvert the minds of children. They're showmen. Entertainers. They're a hip-hop Alice Cooper or Marilyn Manson or Slipknot. Twiztid is to horror movies what ICP is to B-movie comedy. Like those things, Twiztid is probably best kept out of the hands of the very young — er, or anyone who doesn't understand the manipulation — but the duo is ultimately harmless.

More, the guys are sharp, intelligent; hence they're as funny as hell. And nobody can claim that they're not successful businessmen. It's all a far cry from their insalubrious beginnings, as Monoxide explains in sordid detail.

"We grew up right in the heart of the ghetto," Monoxide says with grim nostalgia. "Seven and Gratiot. If I told you our story from the time we met up until the time we became Twiztid, it's not even fucking believable. Why try to force that and convert it into music? We grew up in one of the roughest parts of Detroit. We were carrying guns by 16 or 17, because you had to. I'd rather have it and not need it than need it and not have it. We grew up burning crackhouses down and watching the neighborhood come out and celebrate. My house was shot up seven or eight different times. There's nothing cool about getting your house shot up, especially when you're not even there — it's your mom and dad hitting the floor. It's ridiculous."

See, while there's an undeniable element of hip-hop posturing to Twiztid, and Monoxide in particular, they're not for one second attempting to glorify the carnage that was their youth. They know the pointlessness of the violence and crime. That said, perhaps it's surprising that they deny Detroit's mean streets have any influence on their very violent lyrics. Rather, they leave that in the past and turn to more harmless subject matter: "We love horror movies," Madrox says. "It's a foundation of what we do. It's not real, and what really happens is a lot scarier than what happens in the movies. Reality is scarier than fiction."

Those that aren't convinced by their "horrorcore" take on classic rap have to at least admire Twiztid's work ethic. "We're like doctors," Monoxide says without hint of irony. "There's no such thing as a day off. At 2 a.m., we might get a call saying that the print on the CD will not dry, what are we going to do? Anything can happen. We're involved in every piece, every facet of Twiztid. We wake up and we handle as many phone messages as we can off of just our phone. I love that. We both live an hour from here so it's cool not to have to come here every day. We take care of our online stuff. We leave for tour for three weeks so we're planning for that right now. After the tour, the industry kind of shuts down for three weeks over Christmas until February. Then we plan for a spring tour. It just never stops."

A couple of hours in the company of Twiztid is as inspiring as it is surprising. It's particularly refreshing that the guys call homophobia "cowardice."

"I just saw a trailer for a movie where a kid is like 'that's gay,'" Monoxide says. "It all comes back to people not giving a fuck. They don't understand how powerful that word is. That word carries as much power as you going somewhere and dropping the N-bomb. The same amount, except that it's not as aggressively dealt with. You go in a club and drop the N-bomb, bitch you're catching one. You go in a gay club and say 'faggot,' you might catch some bad stares, but that's all. That's why people do it and it's such a cowardly thing, to pick on somebody because of their sexuality. For all they know, my daughter could be gay. They don't know. That's how everybody has to look at it. It's the same as when some white guy comes over and spouts some hateful shit about black people to you. Just because you're white, you're a racist like him? No! My wife could be black. You don't know. The level of naveté is scary."

The gents are honest and candid about their place within the Psychopathic organization. "We're happy being the best No. 2 in the business," Monoxide says of their place behind Insane Clown Posse. "There's not another No. 2 that can fuck with us. We would be No. 1 on any other label. But, it's so not about that here. This is like a family business. It's about friendly competition. Twiztid and ICP feed off each other really well. If all four of us were sitting here doing this interview, you'd think that we could be one band. This isn't a traditional record label. We've been on Def Jam and Island, and they just don't give a fuck. It shows you, though, that if we wanted to go in another direction, we could, and I'd bet dollars to donuts that we'd be highly successful. Do I think we'd be here forever? I don't know. Like this, we'll be here forever. We can do this shit in Vegas when we're 60 if we want. A revue. To me, that's because we didn't do tours with Limp Bizkit and we didn't do Woodstock. We were like, 'No, that would kill us,' at that point."

They've also had to come to terms with the fact, as much as they'd like to, they can never take off the makeup. The Juggalos, apparently, don't want that.

"We've had our conversations about our artistic integrity, where we didn't want to believe that we sell just because of the makeup," Madrox says. "We made the educated decision not to fight what we don't have a say in. They made us. What we are and what we have we owe to them. We tinker with other stuff and leave shit like that alone. We acknowledge the fact if there was no them, there's no us. We'd just be doing it for the hobby."

The road to success for Twiztid is littered with compromises, and the two are fine with that. If the fans want the makeup, they'll wear the makeup. The tradeoff is that Twiztid will, within reason, do what they want musically. Take the new album, Heartbroken and Homicidal, a record that's quite a different beast from the previous album, W.I.C.K.E.D. While that album dealt almost exclusively with fictitious subject matter (demons and the like), this time they're tackling real issues and, they say, saving lives in the process.

"We've had people tell us that we've saved their life," Madrox says. "There are a million and one introductory statements you can make to a person that are not, 'You saved my life. You let me know I wasn't alone in the world.' That's no smoke up our ass. That's a real motherfucker about to kill himself and then he heard some dumb shit we did and it changed his mind."

Hey, if Twiztid have saved even one life, then they've already more than proved their worth, right? Who's to argue? And, thanks to ICP, they have a built-in fan base. As long as they stay true to what has already been given the seemingly always-topical Juggalo seal of approval, those fans will be on them forever, and Twiztid care little for the many who joke at the Juggalo phenomenon. If anything, the two thrive on the animosity aimed at them.

Still, the animosity is misguided. The two men of Twiztid are actually anything but twisted. They play their onstage psycho roles well, but scratch the surface even slightly and you'll find two family men who are anti-homophobic, anti-racist, anti-sexist and are appalled by the violence that really goes on in the world.

Twiztid's Heartbroken & Homicidal is out now on Psychopathic Records.