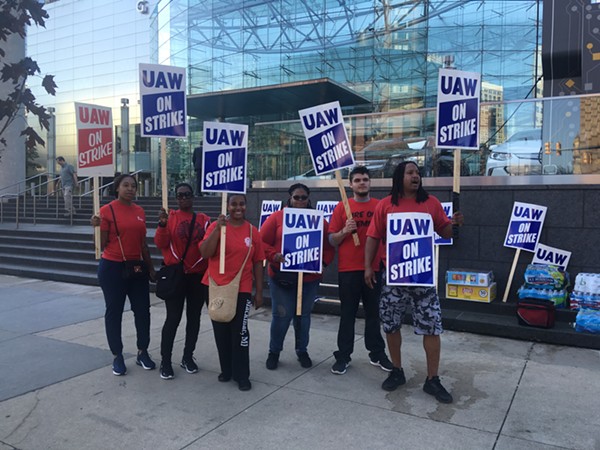 Walking out of work was "scary and uplifting at the same time," says Shawn Edwards, as she pickets General Motors' Detroit-Hamtramck assembly plant as part of the United Auto Workers that started on Monday last week.

"It's scary because we have lives to maintain and we don't know how long we'll be out," she says. "It's uplifting because we're making a stand. We're not accepting concessions from a company posting billions of dollars of profits. And because we're all together. There's safety in numbers."

By halting production at 55 factories and parts centers, 49,000 strikers are hoping to make up ground lost since the UAW agreed to half-pay for new hires, in 2007. That concession was followed by the Great Recession and the auto bailout, when GM got $50 billion from the taxpayers and even more concessions from workers.

It's the largest private-sector strike since 2007 and has garnered visits to the Detroit-Hamtramck picket line by presidential aspirants Amy Klobuchar, Elizabeth Warren, and Bernie Sanders, who is expected to visit Wednesday.

GM has since rebounded from its ills, making $35 billion in profits in the past three years. GM paid no federal income taxes last year and gifted CEO Mary Barra $22 million.

Yet union workers, whose contracts were once the lodestar of the private sector, continue to fall behind as GM fills its factories with low-paid temps, contractors, and a subsidiary called GM Subsystems — all doing work once performed by regular GM employees. In 2007, the GM workforce was half as big, at 74,000, as it is today.

Not satisfied, GM is demanding more concessions from its overworked employees, a sign that the company sees the UAW as an easy foe, especially given the corruption scandal rocking its top leadership.

It's a testament to the rank and file that, despite everything, they walked out as one. Even as their leaders kept mum about bargaining goals, auto workers decided what they were prepared to fight for.

Today, contracted-out janitors in the plants make as little as $15 an hour. In the past, they would have been direct employees of GM and covered under the auto contract, which pays Tier One workers about $31. Janitorial jobs were often reserved for high-seniority workers whose bodies were worn ragged from years on the line. Today most such jobs that GM considers ancillary are done by contractors.

At the GM Tech Center where Jessie Kelly works, in Warren, she says there are 1,300 workers employed by GM and 550 by Aramark.

Michael Mucci, a skilled tradesman at Detroit-Hamtramck, says he has literally taken his father's job — but his father's employer was GM and his is Aramark.

GM further relies on "permatemps" as 7 percent of its blue-collar workforce — GM employees who perform the same jobs as regular workers, but for $15 an hour and worse benefits.

"As a temp you have absolutely no rights," Kelly says. Temps are allowed to miss only three days of work per year, unpaid, with advance approval, and can be forced to work seven-day weeks. They get no profit-sharing. But many stick it out for years, in hopes of landing a Tier Two job.

Unlike common practice in many unions, UAW International leaders organized no contract campaign before the strike to energize members and pressure management.

Not a button was distributed in the plants. There was no survey of the membership, no rank-and-file "contract action teams," no bargaining bulletins to keep members in the loop. No "practice picketing," no turn-down of overtime, no outreach to the public, no open bargaining. Picket signs read simply "UAW on Strike."

Given GM's massive profits, the UAW was well positioned to turn this strike into a national referendum on corporate greed and to get the public behind workers' demands, just as the successful national teachers strike wave has demanded "the schools students deserve."

What if the UAW had started campaigning a year ago for a Green New Deal — to convert auto plants to wind turbines, electric buses, light rail — all the alternatives to the internal combustion engine that we will need to mitigate climate change? Auto workers could have swelled the numbers of last Friday's climate justice march, where they would have been welcomed as heroes.

But as they have for decades, UAW officials ignored the rest of the world and played their cards close to the vest. Before the strike, members knew only what they read in the media, explains materials handler Sean Crawford of Flint Assembly.

GM wants members to pay more for health insurance and is offering a less-than-inflation raise: 2 percent the first and third years and 2 percent lump sums the second and fourth years. Worse, it offers no movement on the odious tiered system.

To signal that it's playing hardball this year, GM stopped paying for strikers' health insurance; the union will pick up the tab for partial coverage. In earlier decades, the auto companies continued to pay for insurance right through strikes.

Complicating the strike is the ever-expanding corruption scandal. The houses of President Gary Jones and former President Dennis Williams were searched by the FBI Aug. 28.

Jones's top lieutenant before he became president, Vance Pearson, was charged with using union funds for personal luxuries, and it's widely believed that Jones and Williams will be next; they are cited as "UAW Official A" and "UAW Official B" in court documents.

Jessie Kelly says the corruption was not the priority right now: "If somebody in the union abused their power, their future is already set out for them," Kelly says. "Ours is not, ours is up in the air. All we can do is be there for each other because if we lose sight ... GM will win because we were focusing on the wrong fight."

Mitch Fox, of Romulus Engine, thinks his officers' disrepute could even be a motive for the strike. "With everything that's going on, maybe they'll try harder to gain our respect back," he says. "Hopefully that's the plan."

They can vote no

But if past contracts are an indication, the pact Jones negotiates will be weak. If the strike is meant to wear members down rather than GM, leaders may accept a deal with a big signing bonus and plenty of tiers.

In that case, GM strikers can do what Chrysler workers did in 2015: organize to turn down a contract that enshrines the multi-tier system.

Rank-and-file Chrysler workers made leaflets and T-shirts, created Facebook groups to share their tactics, and rallied outside informational meetings.

They did what no one thought possible and voted Williams’s offer down 2-1, overcoming his declaration that “ending two-tier is bullshit!” The second offer set an eight-year grow-in to full pay for second-tier workers (though still without pensions or equal health care).

What the automakers gave with one hand they took away with another, though — they also increased the use of temps.

"I’m voting no on any contract proposal that doesn’t give a pathway to equality for every GM/UAW member," Crawford says. "This is a sacred principle. It is the very meaning of the word 'union.'"

A version of this story originally appeared on labornotes.org.