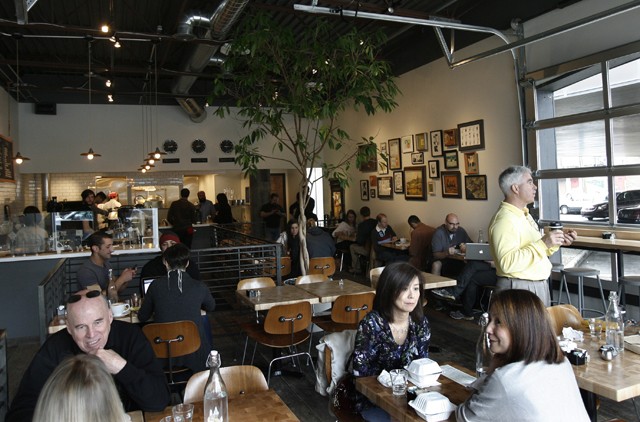 Everyone recognizes something cool when they see it — that jaw-dropping, head-scratching, eyebrow-raising sense of awe that elicits a "Daaaaaaamn."

Be ready to experience that sensation upon entering Commonwealth, the most recent and unmistakably hip addition to Birmingham's dining scene.

The obvious consideration put into the decor and atmosphere might for a brief second leave some wondering if the ownership even had time to think about the food and drink, but worry not: The coffee ranks among the best in the area, and the food is prepared well to delicious results.

But first impressions are important, and Commonwealth makes a good one: Rough-hewn wood floors are underfoot, and exposed metal ceilings are above. Between them you'll find contemporary wood tables, a single decorative tree and stark, white tiling that extends from the kitchen, creating a minimalist, clean feel. Garage doors open on two sides of the restaurant, exposing patrons to the elements on those occasional idyllic Michigan days. And a small coffee roaster that looks like a piece of steampunk sculpture sits in the far corner.�

It would be easy to say that it looks like what one would expect an upscale casual café to look like — except that such a cursory analysis would deny the obvious craftsmanship it took to construct such a beautiful, cohesive space.

More so than the decor, though, the reasons to come to Commonwealth are the coffee and the food.

Michigan has not yet widely embraced the coffee culture already established in places like New York, San Francisco and Chicago. But Commonwealth is certainly helping the process along by roasting its own beans in-house and offering them all as pour-over-style drip coffees. They also have the standard milk-based drinks, including a dessert-like latte with house-made sweetened, condensed milk.

And of course, they have their seasonally prepared espresso.

Despite the preponderance of trainees and high school juniors slinging coffee at various cafés around metro Detroit, it actually takes quite a bit of skill to pull a proper shot of espresso. Time, pressure, temperature, grind, equipment: Each contributes to the final flavor, and — outside Ann Arbor — it can be difficult to find a transcendent shot in the area. Commonwealth's are tasty, packing fleshy fruit, blueberry and lemon flavors into those tiny cups.

Given as much attention as the coffee, there's a well-articulated food menu for breakfast, lunch and weekend brunch. With emphases on simplicity and fresh ingredients, eating at Commonwealth feels surprisingly healthful. Where appropriate, dishes are generally paired with a small side salad tossed in a simple vinaigrette, and the portions, like the prices, are just right.

Early risers can select from several expected choices, each elevated from what one might find elsewhere: homemade yogurt with granola, steel cut oatmeal, a buttermilk waffle, and so on.

Definitely consider the surprisingly light fried egg sandwich, which, for $8.50, features eggs from the local Calder dairy, guacamole, and locally made whole-grain bread from Dakota Bread Company in Bloomfield. If the sandwich and accompanying greens aren't enough, add one of the breakfast sides — Nueske's bacon from Wisconsin, house-made breakfast sausage, or sweet potato hash — for $3.50.

The hash, a mix of sweet potatoes, fingerlings, bell peppers, red onion and scallion served in a large bowl, is nearly a small meal itself. Like the egg sandwich, it's not at all greasy or heavy; rather, it's made in a refreshing approach that emphasizes the natural flavors of the ingredients themselves.

At $9, the Mediterranean quiche with feta, spinach and olives is the most expensive breakfast option, but the cost is well worth the opportunity to taste the buttery, delicate, crumbly crust.

Lunchgoers may want to try the tomato soup and grilled cheese ($9). They suggest dipping, but the soup is so creamy, smooth and pleasantly acidic, our party accidentally "sampled" too much of it before even glancing at the sandwich, which combines salty Manchego, tangy boursin, and meaty haloumi cheeses on a fluffy, lightly grilled ciabatta.

A few salads and sandwiches, including a delicate, toasted tuna salad sandwich kissed with dill for $7.50, round out the lunch menu. Afternoon sides continue the relatively healthy theme in the form of a roasted vegetable and quinoa salad, chips and a creamy guacamole, and a hummus and pita plate.

Commonwealth also makes its own muffins, scones and pastries. Moist on the inside and a bit crunchy on the outside, both the raisin bran muffin and vegan apple-cranberry cake are delicious. However, not everything meets the high standards set by the rest of the menu: A basil scone on a recent trip had an interesting sweet-savory flavor but was so soggy and doughy as to be unpalatable.

There's adequate room at tables for groups, but solo diners may enjoy grabbing a seat at one of the communal counters running along the large glass garage doors in the front. Need some reading material? No problem. You won't find People and Redbook — you're weeping, I'm sure — but Commonwealth has a rack full of publications such as Wire, Aperture and Gramophone.

So stop in, select a magazine, order at the counter under a dimly lit bulb, perhaps an espresso pulled from a La Marzocco machine, and wait for your food to be brought by a raffish server in a skintight T.