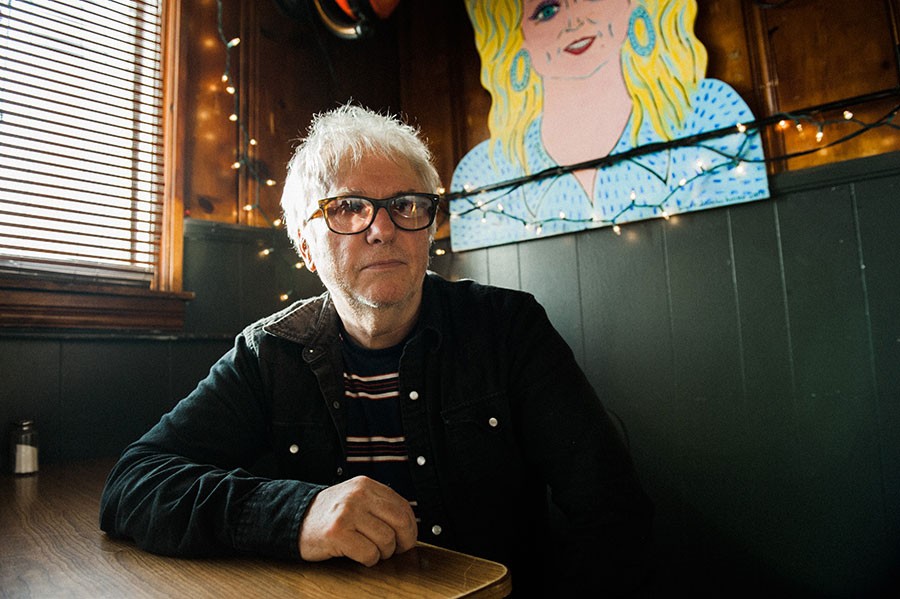 If the name Wreckless Eric doesn't ring a bell, then underground punk icon Eric Goulden has done his job.

After dropping out of art school, Goulden topped the charts in 1977 with his single "Whole Wide World" — the same year fellow Brits, the Sex Pistols, released Never Mind The Bollocks. Goulden's brand of angst was stocked with more rhythm and less mosh-worthy angst than his spikey-haired contemporaries. Nevertheless, Wreckless Eric's "Whole Wide World" challenged the punk norms by being unexpectedly romantic, and with only two chords Goulden dismantled the mechanics of what it meant to be a rock 'n' roll star — mostly because he had always dreamed of being in a pop band.

When we catch up with Goulden he is days away from the release of Construction, Time & Demolition, his seventh studio record and the follow-up to 2015's AmERICa. As he battles bronchitis, he is more than eager to chat about his love of Detroit's UFO Factory, volcanic honey, and why artists should embrace their breakout hits.

Metro Times: How are you going to kick this bronchitis in the next 24 hours?

Eric Goulden: I don't think I will, really, I think I'll rise above it. My new thing is this manuka honey, have you heard of it?

Goulden: It's some honey grown from flowers on a volcanic island. And it costs short of $40 a jar. It is the elixir of life itself. My god, there's something so decadent about it. You have this jar and this spoon, and you take a big spoonful of it, that costs a fortune. I think I might put it on my rider.

MT: What was on your rider 40 years ago?

Goulden: I remember when I took a bottle of vodka off of it. I took it off for good reason. I think it was too catastrophic in those days. I tried to get cigarettes on there but I gave up smoking a very, very long time ago. Now it's just six bottles of mineral water and a hot dinner.

MT: Congratulations. I quit smoking seven months ago and I have my moments. Is it hard being in rock 'n' roll without a cigarette?

Goulden: Not anymore. It's fantastic. In the old days of doing it, every night you would struggle out of this fucking wet with sweaty clothes that stunk of cigarette smoke. In the morning you would be drying them out in the hotel room. God. Sometimes it's too clean, now.

MT: And now you have volcano honey!

Goulden: Yes but... God, don't you miss smoking in some ways?

MT: I'm glad you said that. I really do. It was romantic and dangerous.

Goulden: It's like bad sex: The reality of it is terrible. But the thought of it is so great. I used to sing fucking backup vocals with a cigarette. I was good at smoking.

MT: Speaking of tour, you head out in a couple of days. In 40 years, has tour gotten easier?

Goulden: You know, I used to do it with a band and we had a road crew and a tour manager. I liked touring, I still like it. It's just me now. That was the best thing I ever did was figure out a way where I could just be on my own. I do things with bands sometimes but I find it holds me back. I find that they subtract more than they add quite often because as soon as you get the drummer involved it sounds normal. It takes it out of the cosmos and into somewhere like Macy's or somewhere. When you're in a band, you have to go everywhere in a herd, and it is like herding kittens.

MT: Have you been to Detroit before?

Goulden: I've been to Detroit twice, I think. Three times. I went in 1979 and I remember driving in November.

MT: Do you remember what venue you played?

Goulden: Bookies. And then I played somewhere, something Stick?

Goulden: Yeah! I played there a few years ago.

MT: How the hell do you remember all this?

Goulden: I sort of walk into a supermarket and forget why I'm there, but I remember quite a lot of gigs. The last time I was in Detroit I played at UFO Factory. That was one of my favorite shows on the tour.

MT: I would me remiss to not mention your breakout song, "Whole Wide World" from 1977. Is it still the cornerstone of your career?

Goulden: Well, I didn't build a career around it. Have you ever heard of Robert Christgau? He's an asshole, but he gave my album an "A." He said all this smarty stuff about it and said I'd ridden "Whole Wide World" for decades and that was my career. I'm proud of "Whole Wide World." It would be very sad if I said, "I'm much better than that. I'm doing this new stuff that is much better than that." It would be a terribly sad thing. I've got other songs that live in the shadow of "Whole Wide World," but Christ, other people haven't got a shadow.

MT: I've talked to some people that have a breakout song and they resent it so much they refuse to play it or even talk about it.

Goulden: But they shouldn't! It's a thrill. People say, "Are you bored of playing it?" And I say, "Well, if I just played it in a vacuum, if every day I went into an empty room and played that song, I'd be incredibly bored." But I play it for people and the effect that song has on people will keep me interested.

MT: We're so privy to the numbers in terms of success now, and the likes and streaming hits. Has that had any impact on you?

Goulden: It was always like that, though, for me. I had looked at charts in the very early days when my first three albums all charted but I felt I had let everyone down because I didn't have any hit singles. I didn't have a major No. 1 hit single. I came out feeling like a failure.

MT: That's not fair to yourself.

Goulden: No, but its your young life and it stops you moving forward. You're just stuck in this morass of failure.

MT: Did you ever try to quit?

Goulden: I tried to but I didn't really want to. Then I got to the point where I thought, "Fuck, I fucked up. I can't get a job now." I probably could, but it would be a lot of effort. I just want to do what I do. I can't help it. I don't know if it's a terrible addiction or something like that.

MT: Being a musician becomes sort of a compulsion at some point. Or an unchangeable DNA component.

Goulden: Right! But I love getting home and suddenly realizing that I'm at home and can do anything I'd like. I can do some recording. Sometimes I record when there's nothing to record, just keeping practice at it because something might happen. Then I have to get ready to go out and play again. All of this stuff is terribly exciting to me. I actually got the vinyl delivery in this morning.

MT: That has to feel pretty good before you head out.

Goulden: It's thrilling! It's just over 41 years since my first record came out. I remember holding a copy of that in my hand and just being absolutely shocked.

Goulden: Yeah. It still does. I'm still like "Wow, here I am. I've got a box of records. Let's go to the cafe and give one to the lady in the cafe who runs the coffee shop."